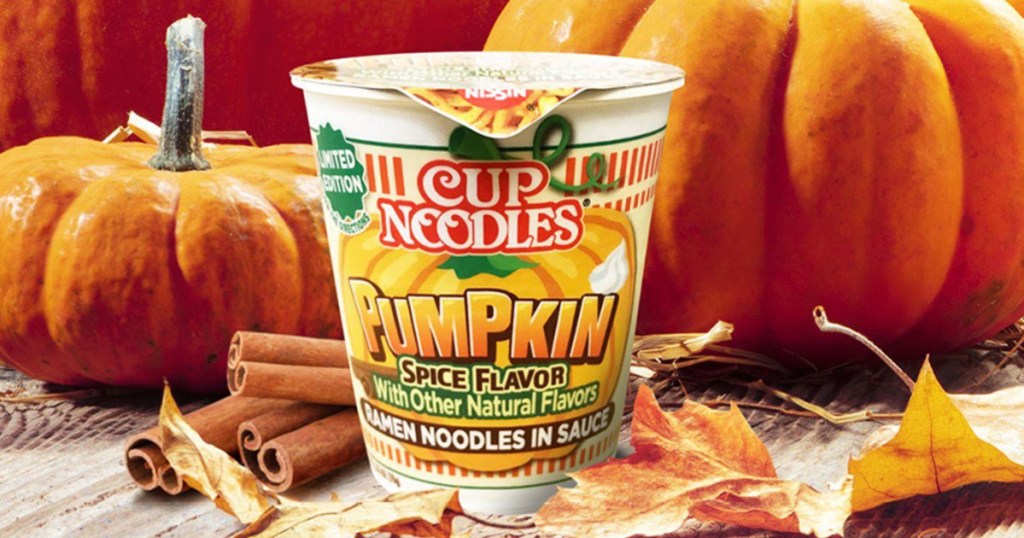 We can’t wait to cozy up to our favorite pumpkin spice… Cup Noodles??

That’s right! After all, no one said pumpkin spice had to exclusively be enjoyed in latte form. 😉

Believe it or not, the Cup Noodles inventor Nissin Foods decided to hop on the pumpkin spice train instead of being left out! It’s a unique way to celebrate their 50th anniversary which takes place this year, and well… this flavor combo may be too interesting not to try.

“After 50 years of noodle innovation, what better time to release our most unexpected flavor to date with pumpkin spice, and trust me it really is that good!”

And don’t worry–the Pumpkin Spice Cup Noodles won’t be exactly like the soupy Cup Noodles we’ve had in the past. The noodles will be “saucy, not soup-based,” but they’ll still only require a splash of water and some time in the microwave to enjoy!

While there have been a few other bizarre flavor combinations featured so far this year, Pumpkin Spice Cup Noodles are definitely at the top of the weird-food list.

If you want to try these unique new Pumpkin Spice Cup Noodles for yourself, we have a bit of bad news: this particular flavor is limited edition and won’t be available until late October. However, when it does become available, you can score yourself some samples at Walmart! We don’t have the exact release date yet, so be on the lookout in a couple of months when the new featured flavor is supposed to hit store shelves.

While it’s true that we’ve never seen pumpkin spice in Cup Noodle form before, this isn’t the first time that sweet and savory flavors have come together. We even have savory pumpkin recipes featured here on Hip2Save, like our Crockpot Pumpkin Chili and Pumpkin Fettuccine Alfredo. So while it may seem a bit strange, it’s totally possible to make those combos work!

Whether you prefer your pumpkin savory or sweet, this crockpot pumpkin puree will be a hit!