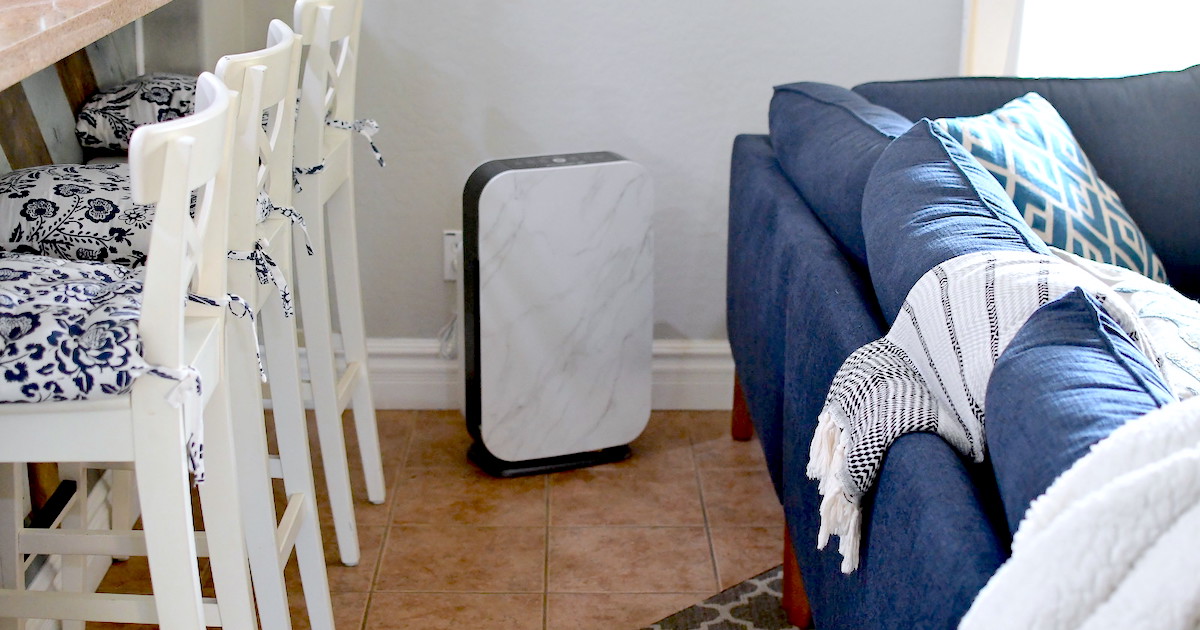 A breath of fresh air! 🌬

These days having one of the best air purifiers in your home is crucial. Between COVID and the heart-breaking wildfires currently happening in California, it has left many of us on a hunt for cleaner air. I’m sharing the 5 best air purifiers you can buy on the market today for all budgets so anyone shopping around will be breathing fresher air for days. 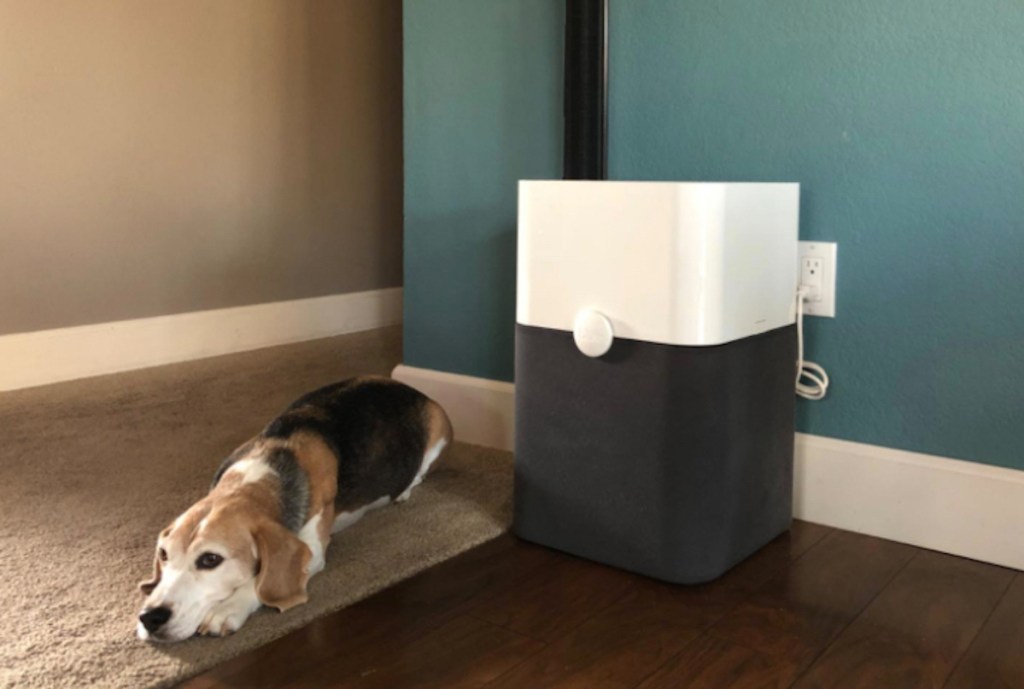 A top pick by Good Housekeeping and even rated as the best on Consumer Reports, if you want the best air purifier on the market, period, look no further! This rather budget-friendly air purifier is sleek and designed to look great in any room of your home. More importantly, with its three-part filtration, it cleans air exceptionally well.

You can also check Target for this air purifier although they do sell out fast! 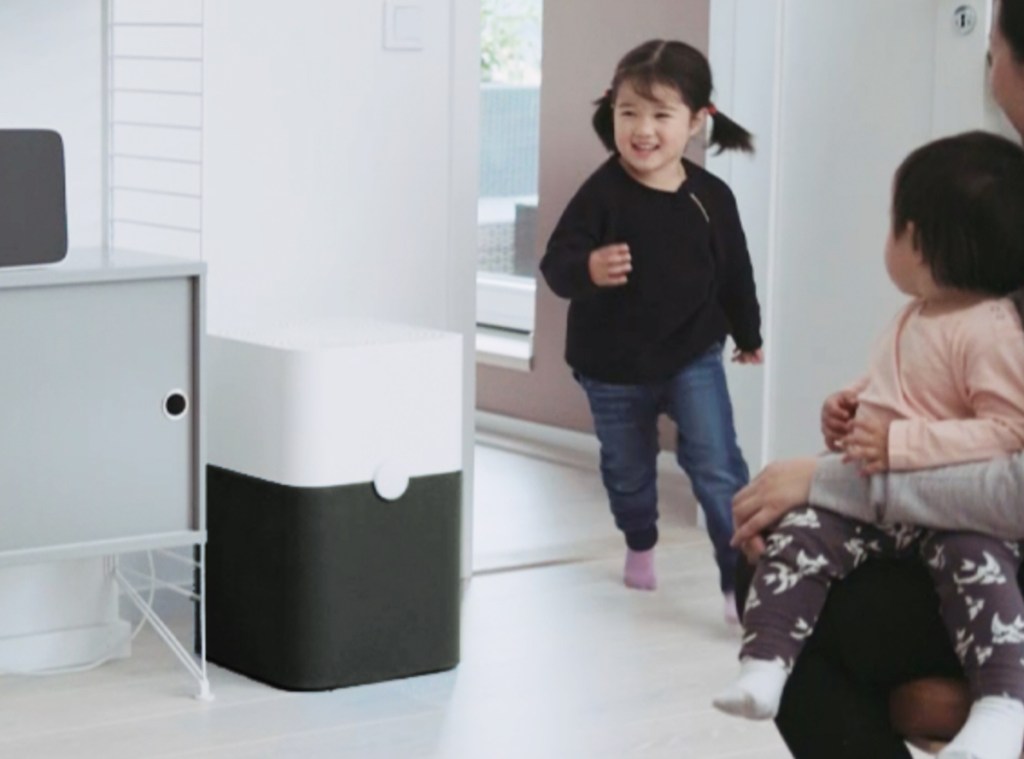 Here are some other things you’ll love about this Blueair Purifier: 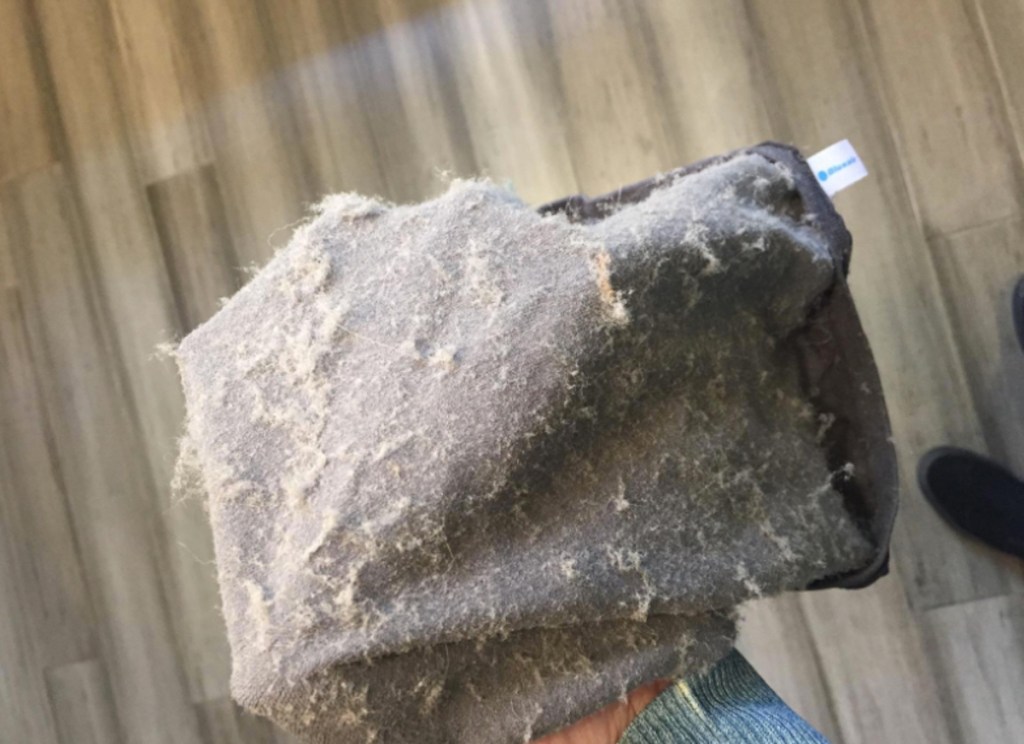 “I’m incredibly impressed with this air purifier. I’m living in a new house with some indoor air issues containing mold and lots of dust. I have an allergy to both and my daughter had been coughing since we moved in. We also had a wicked stink in the house which we could not figure out where it was coming from.

We plugged our new Blueair air purifier in and within a few hours you could notice the air was cleaner, it smelled nice inside and overall it felt lighter! Within a week the pre-filter was so coated with dust and crap I was in shock! I included a photo of the predicted after a week of use. It is simple, works great!” – Alex ⭐⭐⭐⭐⭐ 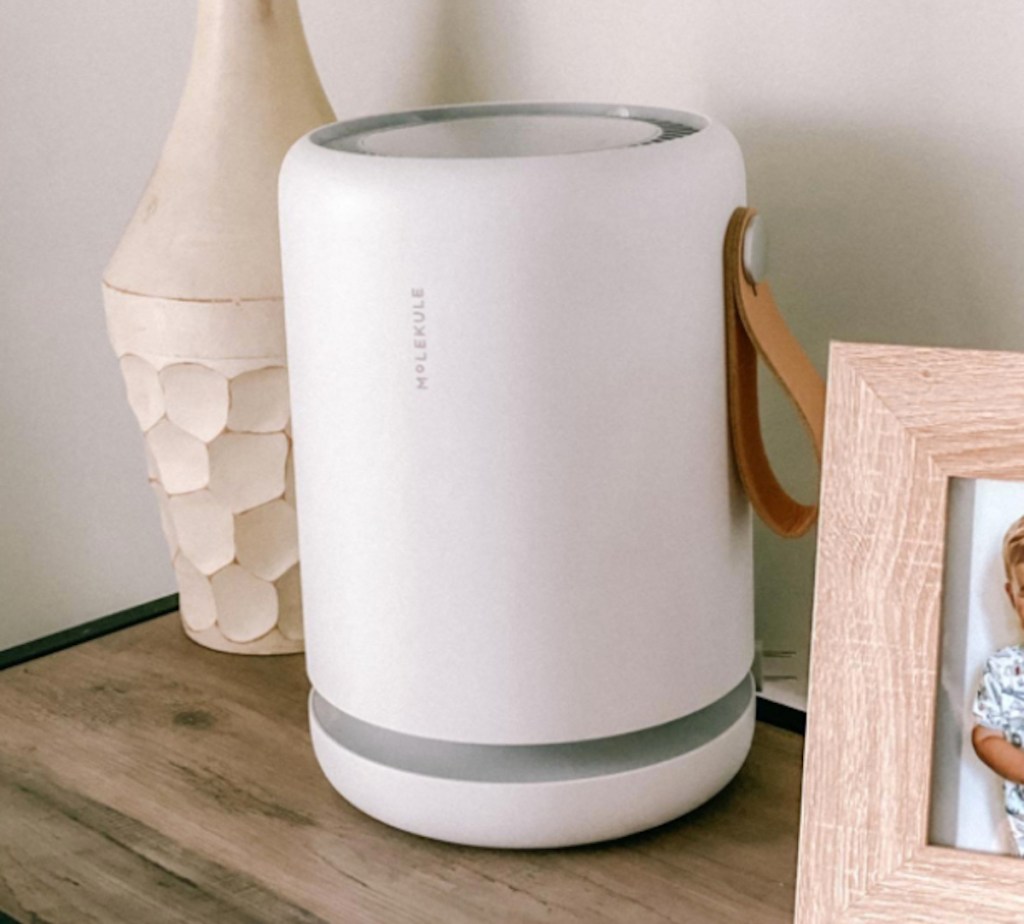 According to Popular Science, the Molekule Air Purifiers are titled as one of the top 10 greatest inventions of the year! To top it off, it even won the Edison Award for 2020. Impressive! That’s because it offers an innovative technology called, Photo Electrochemical Oxidation (PECO), that utilizes free radicals — the same radicals used to destroy cancer cells — to break down pollutants at a molecular level. This includes VOCs, bacteria, mold, viruses, and allergens.

By using nanotechnology, PECO is able to destroy pollutants 1000 times smaller than the standard filters must meet to qualify as HEPA. In fact, it’s so impressive, Molekule has nothing to hide since they make all their impressive data and scientific testing public. Do we even need another air purifier in our lives?! 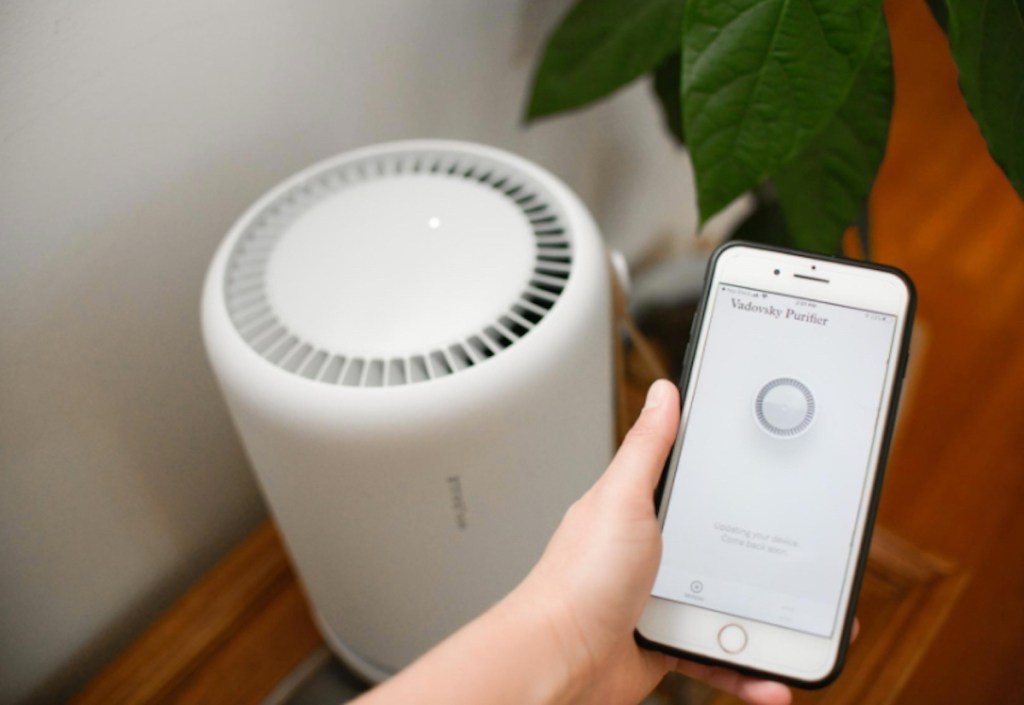 Here are some other things you’ll love about this Molekule air purifier:

“We have 2 of these and they work great! When COVID first started I moved our only one to the living room to help combat any airborne virus and after a few days, I realized I was waking up with a sore throat and irritation. I realized the change was the absent air purifier in our bedroom so I ordered a second one immediately and now have great air in both rooms and no more sick symptoms!

People do complain of a smell, but it is short-lived when you start it up for the first time and it begins running. I feel safer during times like these that I have a medical-grade air cleaning system going.” – Nathan ⭐⭐⭐⭐⭐ 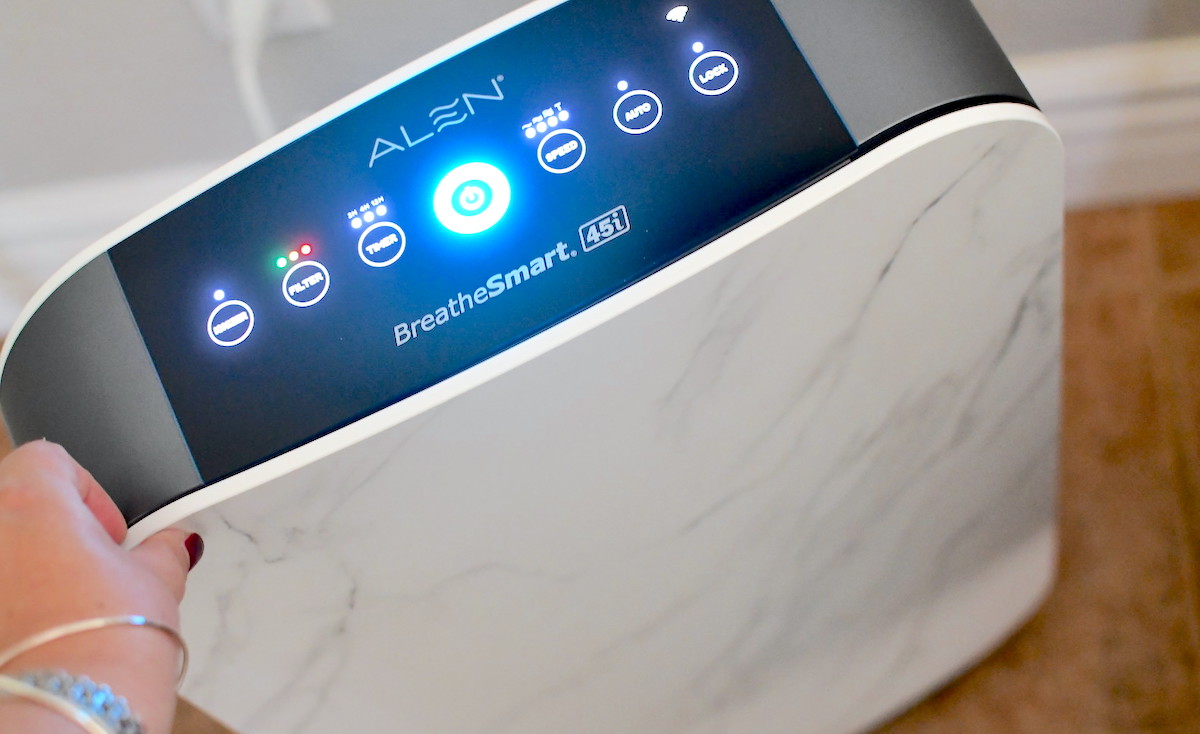 Who would have thought one of the best air purifiers could be guaranteed for life and also improve your sleep?! If either of those perks sounds like a dream to your quest for fresher air then the Alen Classic will be perfect for your home. Also ranked at the top of the list on Consumer Reports, you can’t go wrong with this air purifier!

Plus, this show-stopping design can handle purifying up to 1,100 sq ft every 30 minutes which removes 99.97% of dust, allergens, pollutants, and so much more! 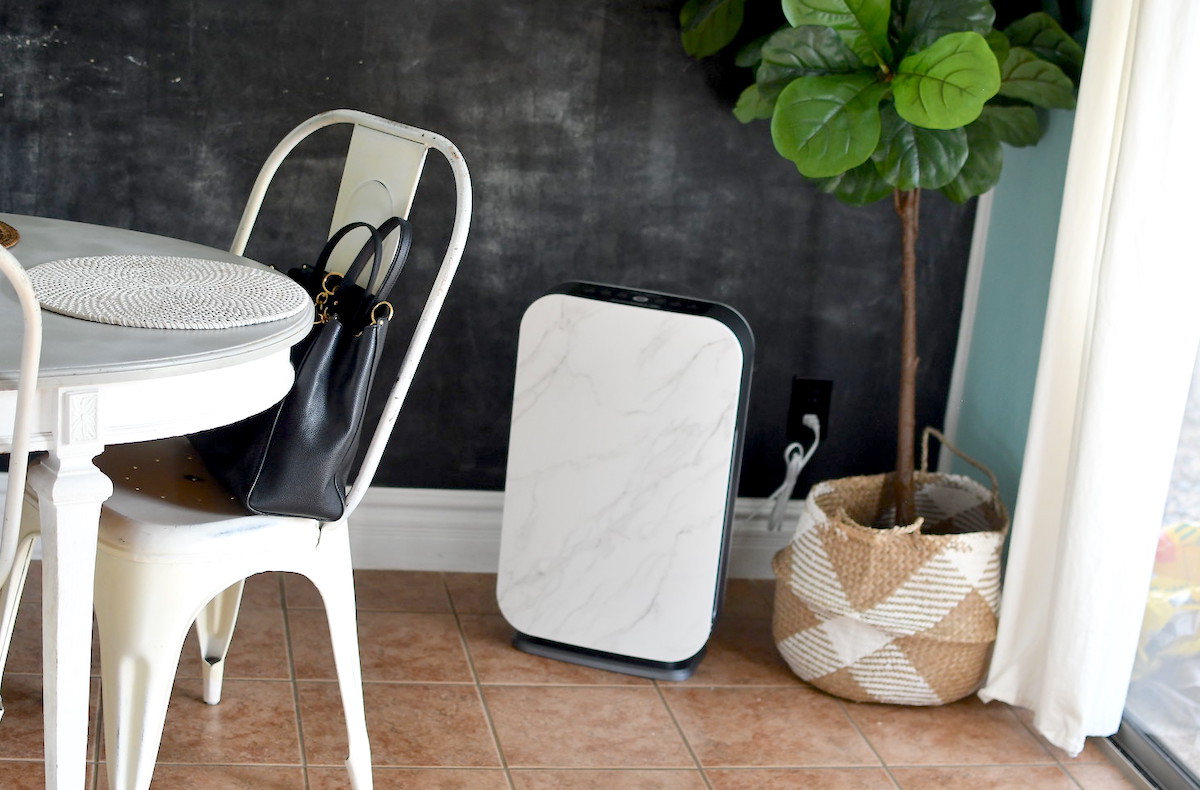 Here are some other things you’ll love about this air Alen purifier:

“I manufacture furniture for a living and my office, design center, and showroom would often get quite dusty. I really noticed a difference within one week of buying this air purifier. My workspace is a total of 8,000 sq ft so one unit wasn’t enough. I purchased 5 more units and we haven’t looked back! After several years of ownership, I’m as happy as the day I first purchased this air purifier!” – Ruben ⭐⭐⭐⭐⭐ 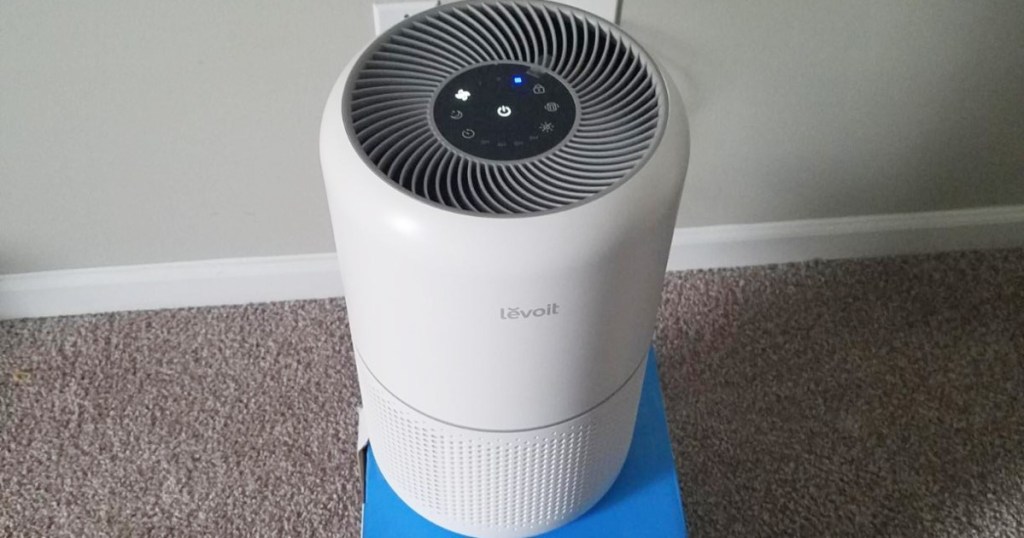 If you love the design of the Molekule air purifier I shared above, but need something a little more budget-friendly that works just as well, then consider a Levoit air purifier! Plus, it’s even the #1 best seller on Amazon! Lucky for you, we’ve even been known to share some hot deals on these air purifiers before so keep your eyes peeled for another one if you’re shopping for a great deal.

This air purifier is designed for large rooms (up to 219 square feet), is 100% ozone-free, and traps 99.97% of allergens like dust, pet hair, and other particles. 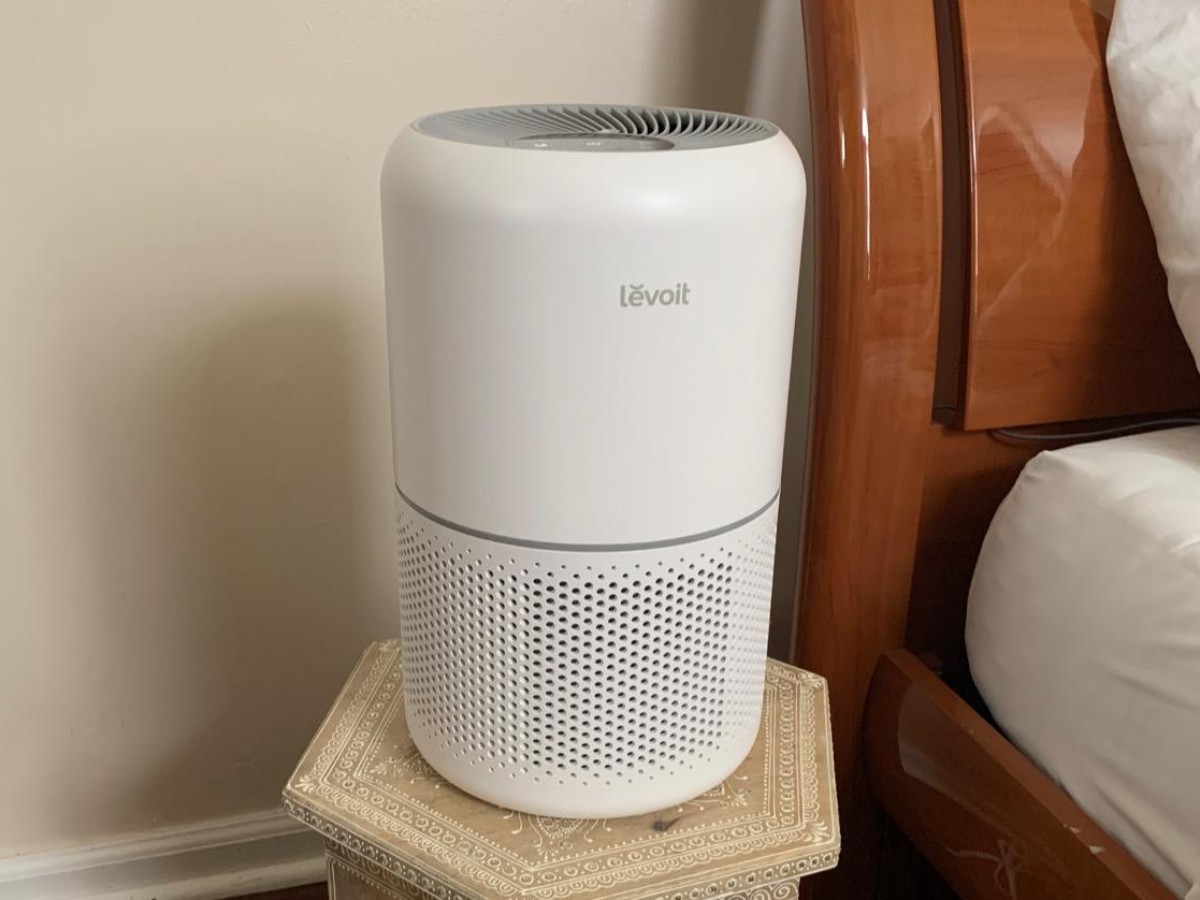 Here are some other things you’ll love about this Levoit air purifier:

“I’ve owned three air purifiers in my lifetime. Despite having the lowest listed power of the three and being half as expensive, the Levoit is by far the most effective of the three. I live in an older house that was built in the 1960s, and dust is a big problem. I can actually see the dust being sucked in and I love that I can set it on a tabletop for peak performance!

I was hesitant to buy this device because of the complaints of a ‘chemical’ or ‘plastic-like’ odor that emanated from it but mine has no odor whatsoever! This air purifier is far more compact & attractive than any other I’ve owned. I keep it on the highest of three settings to get the maximum CADR and it’s relatively quiet. I’ll never buy an air purifier from another company!” – Stuart ⭐⭐⭐⭐⭐ 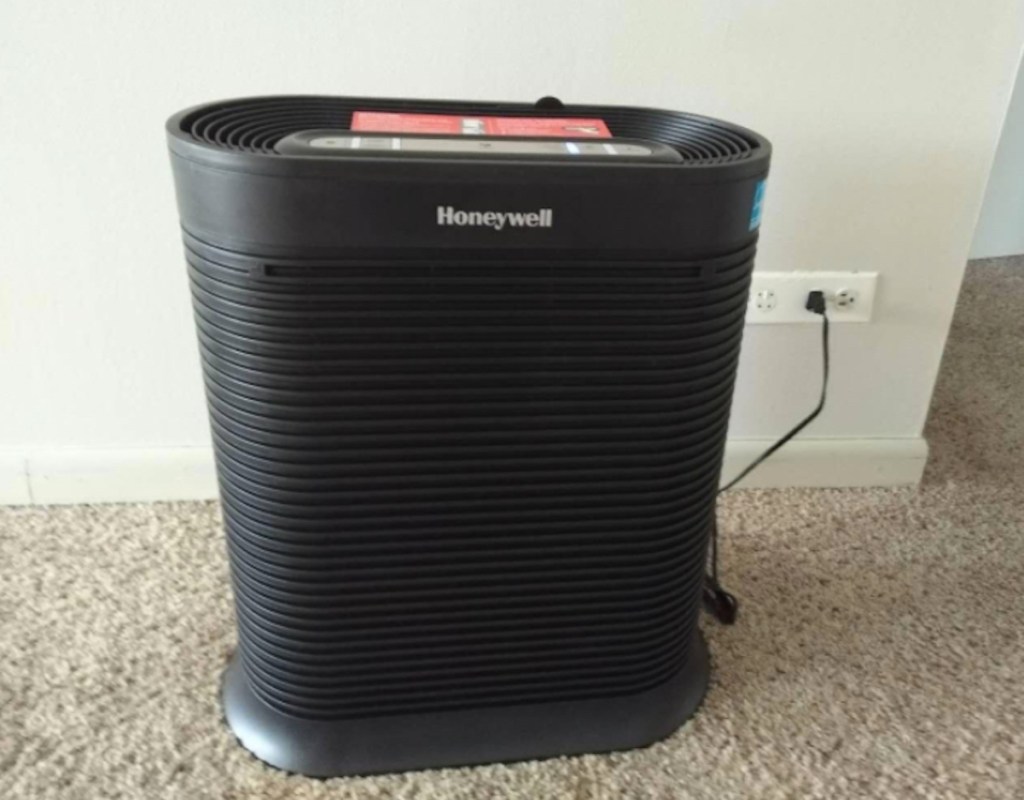 If you’re not too concerned about the modern, sleek looks of your new air purifier and just want something that works exceptionally well, then consider going with the Honeywell air purifier! This reputable brand is the #1 rated brand recommended by Allergists and took 3rd place on Consumer Reports testing (after 2 BlueAir air purifiers I shared above). While it’s not the cheapest option on our top list of the best air purifiers, it’s certainly one of the more affordable options to have in your home.

Plus, it’s built to handle extra-large rooms (up to 465 sq. ft.) so the chances of you needing to buy multiple are probably pretty slim. Talk about tons of bang for your buck! 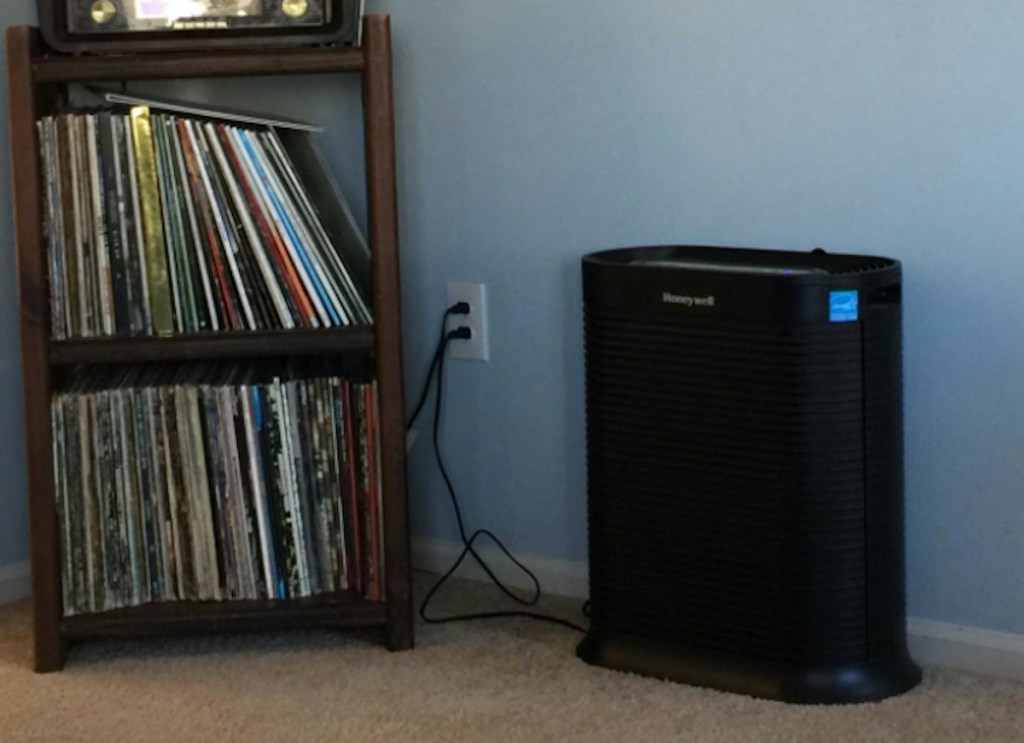 Here are some other things you’ll love about this Honeywell air purifier:

“We’ve had this air purifier for going on 6 years now and love it – it always finds a home in our living room since that’s where we spend the most time. We also just bought a cat and found out my daughter is allergic to said cat so now we run our unit constantly. Luckily this thing works so well her allergies have decreased greatly!” – Debra ⭐⭐⭐⭐⭐

I Ditched My Always Pan for Caraway Cookware & I’m Not Sorry (Over $180 OFF Ends Tonight!) 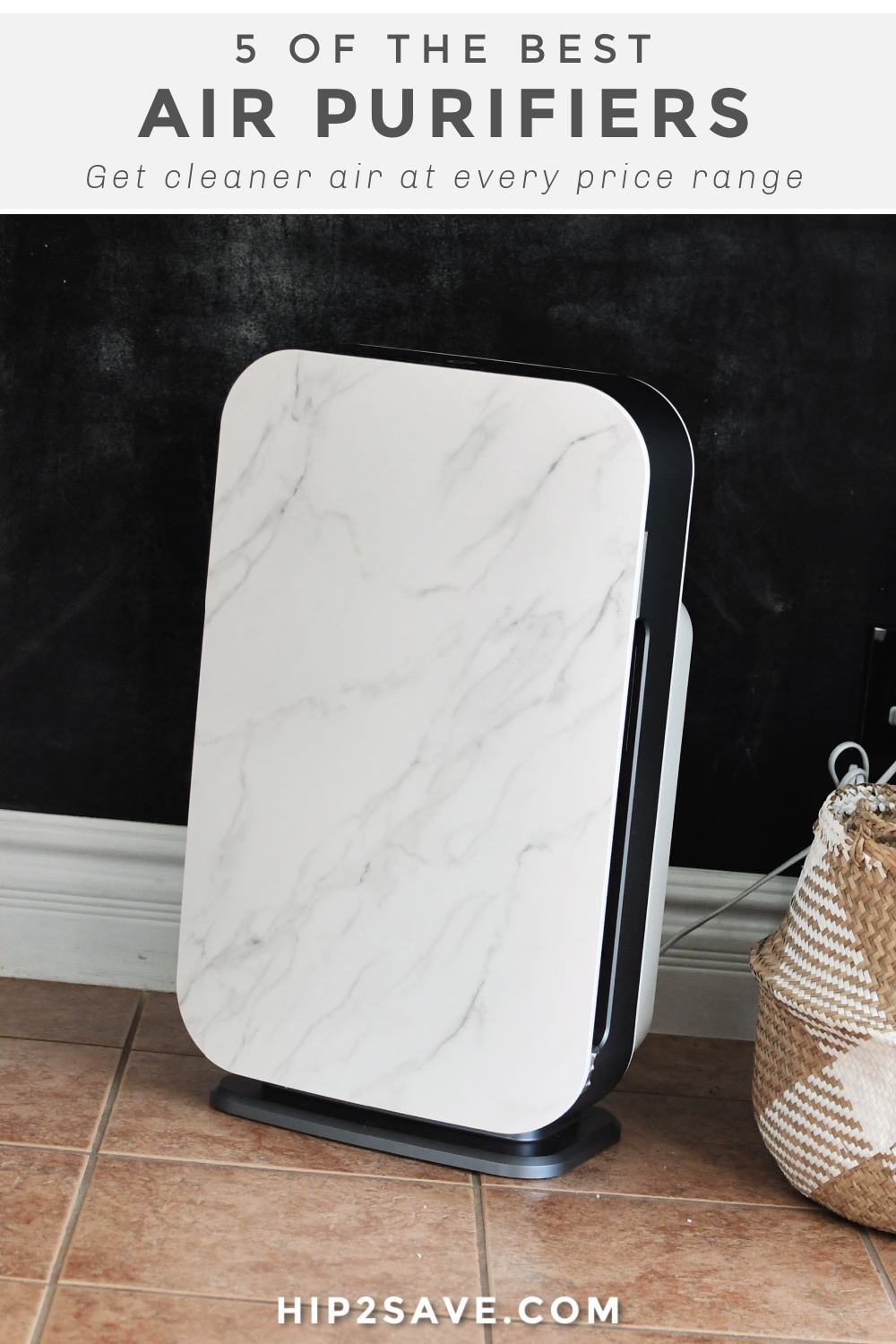