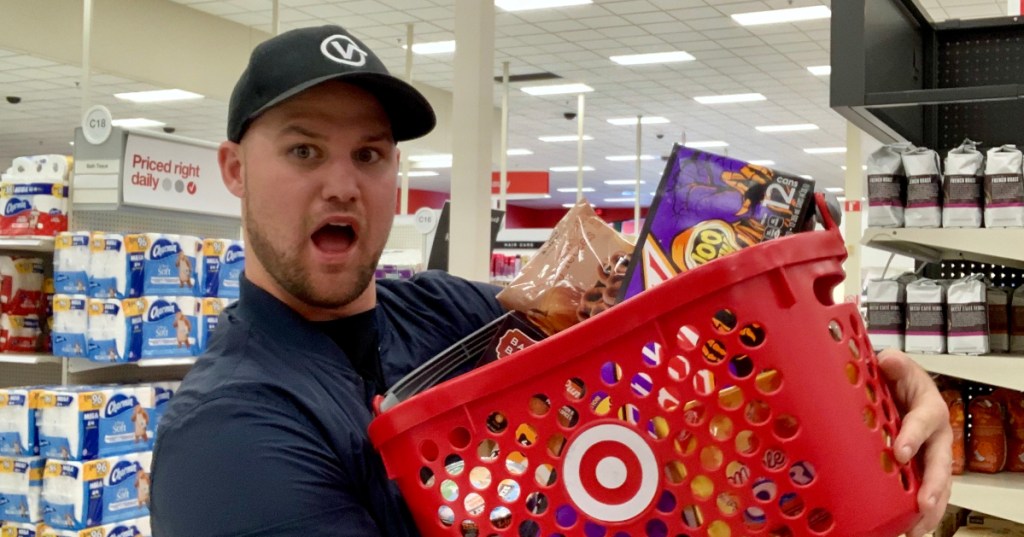 This ☝ is Stetson’s version of a Target run. 😂

With SO many limited-edition seasonal treats on the market for fall, we’re dying to know if there are any clear winners (or losers) among them. So we sent Stetson to Target to try all the fall things… or at least as many goodies as a person can fit into one of those red shopping baskets! 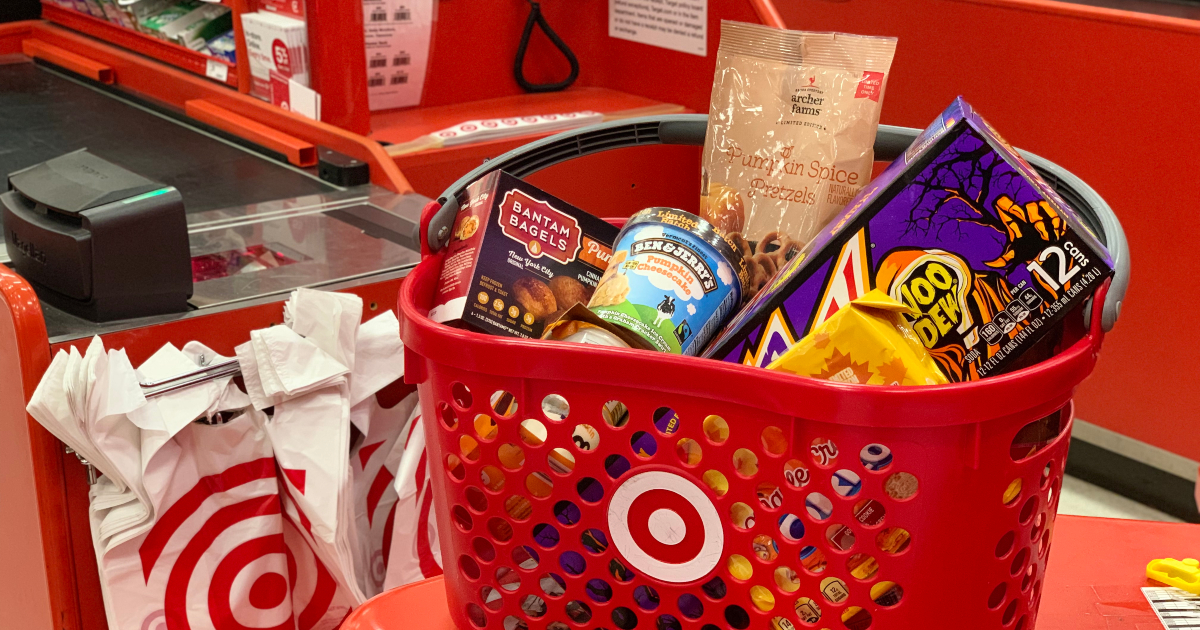 Here’s a look at what Stetson found on his epic Target run. ☝ Keep reading for a detailed breakdown of his fall haul and his honest opinion of these seasonal products.
If you’d like to watch Stetson sample the goods (or if you just want to catch another peek of him in his pumpkin PJs), you can watch a replay of his LIVE video here!

Coated white chocolate almonds? Yes please! With almonds being one of my favorite snacks and now that I’m becoming a fan of pumpkin spice, I thought this was brilliant. They come in a mixture of orange and light tan-colored coatings, and would definitely look presentable in a candy dish for fall. Although they taste exactly like white chocolate-covered almonds, I really enjoyed that hint of pumpkin spice in there. I thought they were worth $3.69 for a 5.5-ounce bag, especially if you’re a fan of both almonds and pumpkin spice. Very tasty!

Hip Savings Tip: Now through November 2nd, get 5% off assorted varieties of Archer Farms nuts and trail mix when you use the Cartwheel offer found on the Target app. 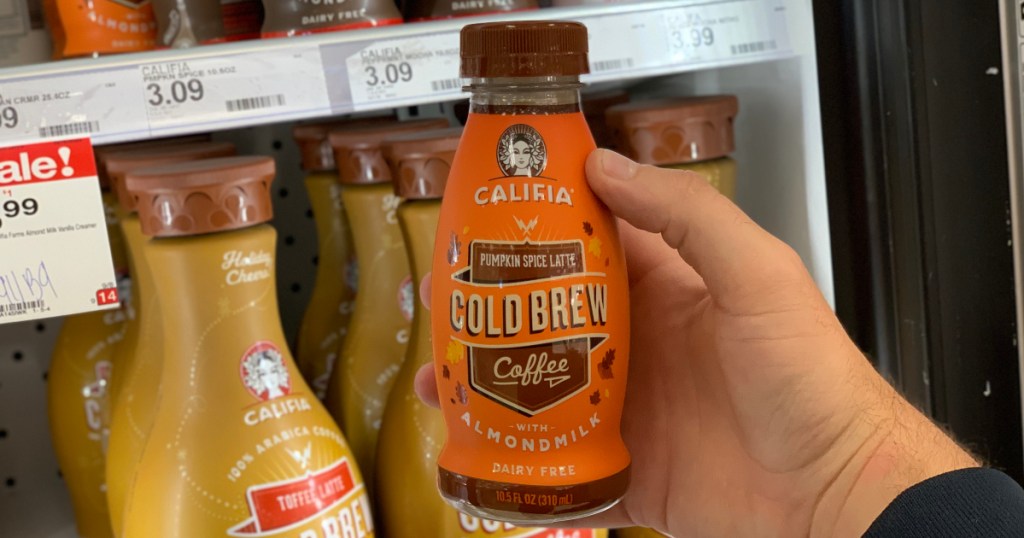 This drink threw me for a loop. At first, I didn’t think I would like this. I’m not much of a coffee drinker, but after trying this dairy-free PSL cold brew, I ended up liking it a LOT! The pumpkin spice flavor was rich and blended well with the almond milk. I would definitely buy this drink again. 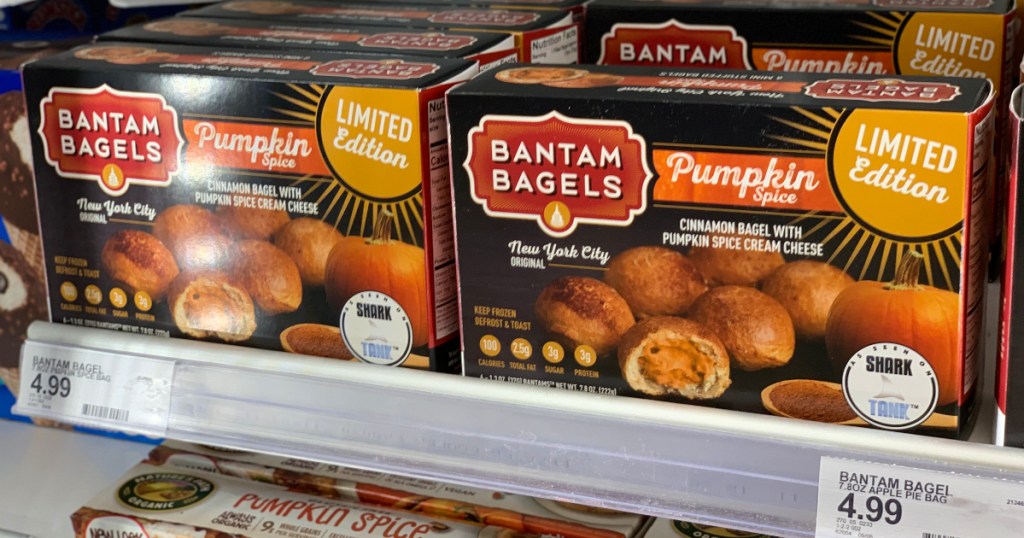 These were SO good and SO easy to make – just 20 seconds in the microwave per mini bagel. The texture of these bites was really chewy. The cream cheese inside is orange like pumpkin, and as soon as I bit into one it melted like butter with a great taste – straight up pumpkin spice! These were my absolute FAVORITE out of all the items I tasted. They were $4.99 for a 6-count box, and worth every penny.

The world definitely needs a pumpkin spice popsicle! These Pumpkin Spice & Cream JonnyPops are frozen, sweet, creamy, and gluten-free with a hint of cinnamon and nutmeg. Stetson says,

This popsicle was a bit melted by the time I got to try it, but it still had that YUM factor. To me, it tasted like pumpkin pie, but with a super creamy texture. I really enjoyed this product and thought it was very good. Originally priced at $3.99 for a 3-count box, I was able to use a 20% off Cartwheel offer to get a better deal! With only 3 popsicles in a box, you may want to buy these now while you can use that Cartwheel offer since they are on the pricier side for such a small box.

Hip Savings Tip: Now through September 14, get 20% off JonnyPops Frozen Desserts when you use the Cartwheel offer found on the Target app. 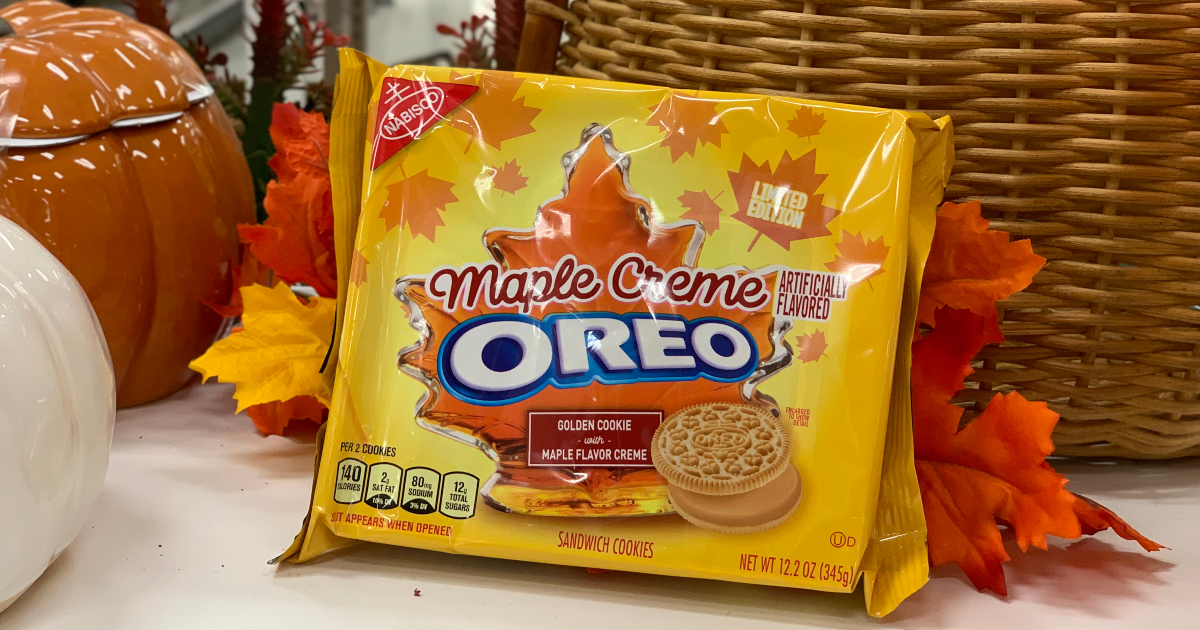 The sweet vanilla taste of the golden OREO cookie pairs perfectly with the flavor of maple syrup found in the creme filling of these Maple Creme OREOs. Stetson says,

I’m big fan of OREO cookies, and I like how they get creative with their unique flavors. These Maple Creme OREOs certainly look different from the traditional OREOs, with their golden brown outer layer and tan-colored filling. When I first bit into one, I immediately noticed the maple syrup flavor. It was an interesting taste, as I thought it had a bit of a cinnamon kick to it as well. I really enjoyed these, and think anyone else who loves both OREO cookies AND maple syrup, will like them too! 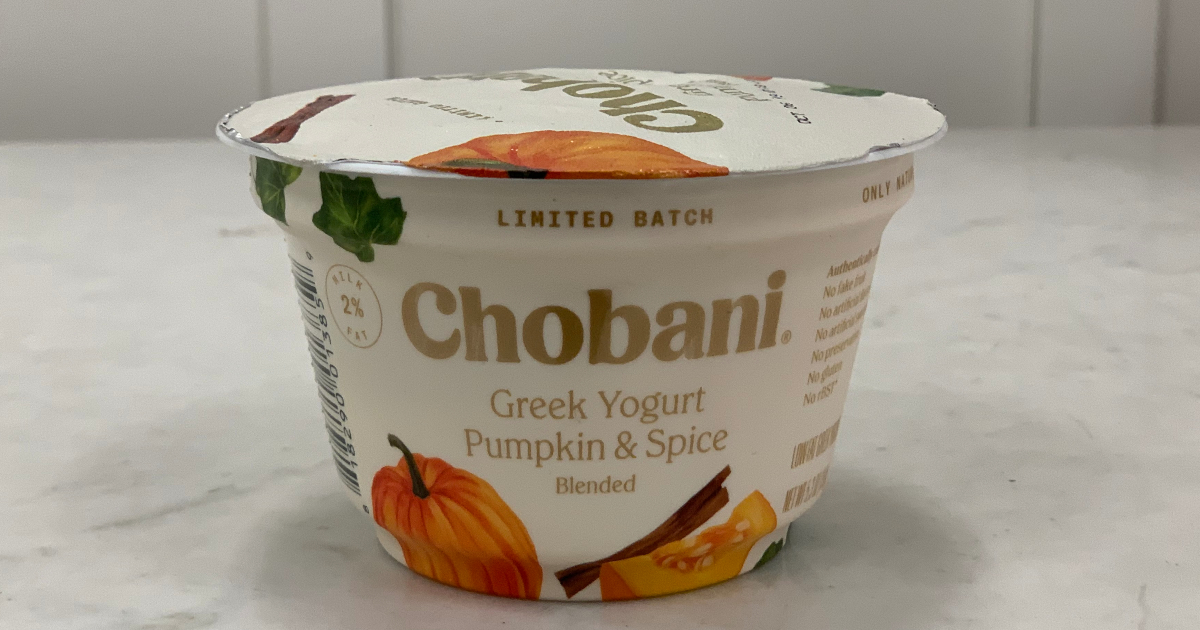 This yogurt was so bland, it had me wondering if my “taster” was broken. It just tasted like plain yogurt to me. Even though it said “blended” on the container, I stirred and stirred, and even dug all the way to the bottom in case this was one of those fruit-on-the-bottom situations. Nope, it just tasted like plain yogurt, all the way down to the bottom of the container. This was bland, tasteless, and definitely my least favorite item from my fall haul. 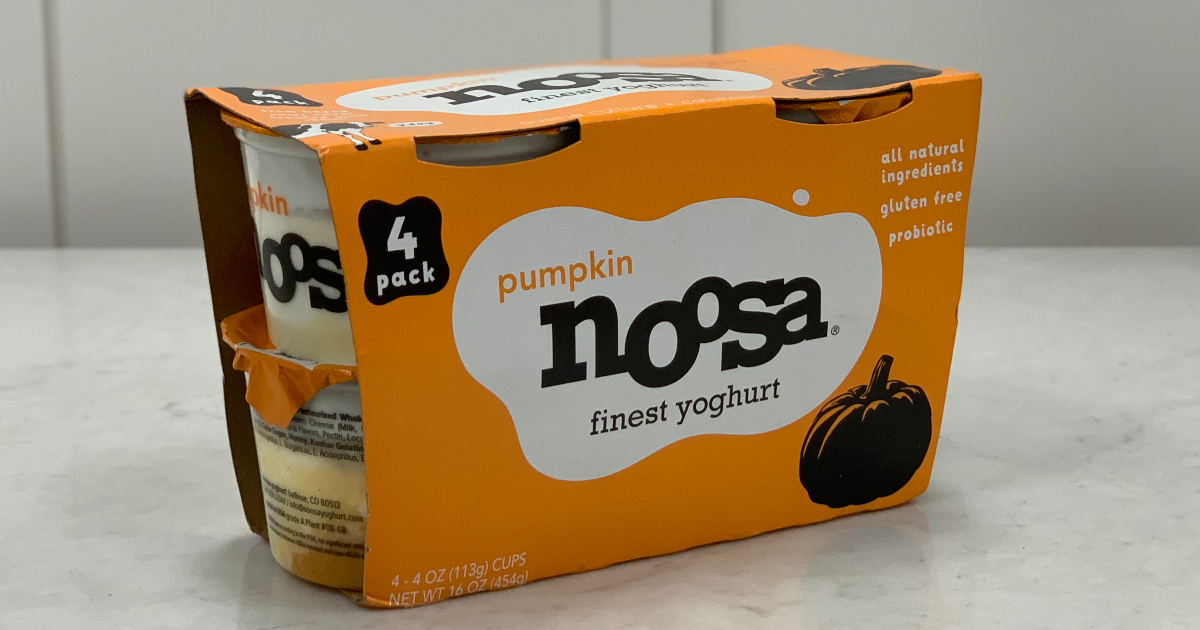 I never heard of this brand before, but I am glad I tried it. I really liked this product. It blends well as you stir it, and you get a really flavorful pumpkin spice taste. It was Iight on my tongue and had kind of a fluffy, creamy feel to it. If you’re a yogurt fan, I think you’ll enjoy Noosa Pumpkin too!

Hip Savings Tip: Now through September 21, get 10% off assorted varieties of Noosa Yogurt when you use the Cartwheel offer found on the Target app.

This limited batch of goodness is every bit as delicious as it sounds. It tasted exactly like pumpkin cheesecake! If you’ve had the Pumpkin Pie Blizzard from Dairy Queen, I would say this tastes very similar. This ice cream is rich and creamy, with chunks of graham cracker crust running throughout the entire pint. I wish this would stay in stock forever! It’s definitely my runner up. The only thing I liked better than this ice cream were those Bantam Bagel Bites.

Hip Savings Tip: Now through September 27, save 50¢ on any one Ben & Jerry’s pint when you use the Cartwheel offer found on the Target app. 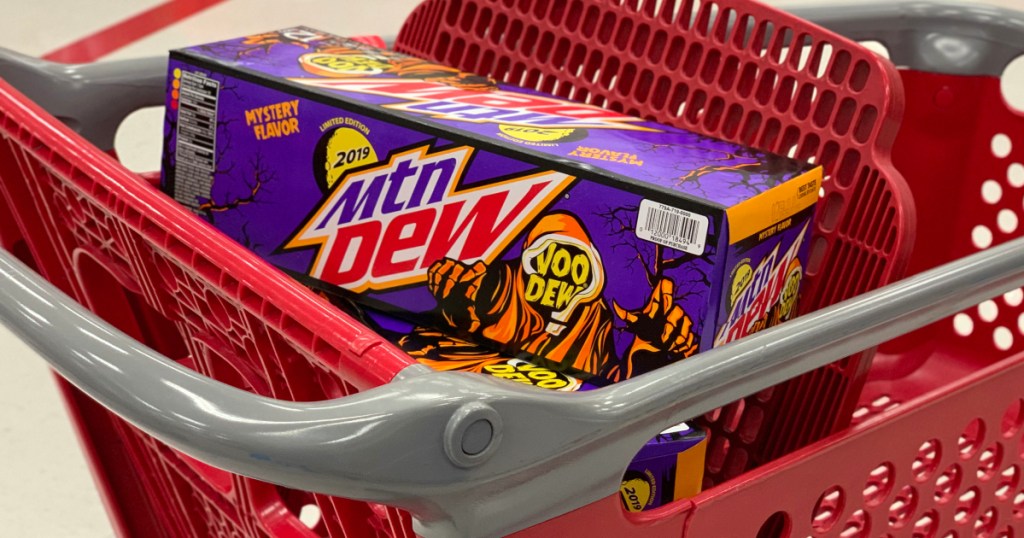 Mountain Dew VooDEW soda is a new mystery flavor with a limited release for Halloween 2019. The clear color of this spooky soda makes it even more difficult to guess the mystery flavor, but it hasn’t stopped anyone from trying! This flavor has been compared to cotton candy, candy apples, citrusy cream soda, and even candy corn. People are all over the place on this one! Here’s what Stetson had to say:

I thought this Mountain VooDEW mystery flavor was fun. I had NO idea what I was going to get out of it. The packaging and cans have cool designs, and that much alone put me in the Halloween spirit. Although it’s very subtle, I did pick up a bit of an orange creamsicle taste. It wasn’t overbearing, and I really thought the drink tasted good. I have heard others compare it to the taste of Skittles. I think it’s fun to try this drink and see if you can guess the flavor. If you like orange soda or Mountain Dew, I think you’ll enjoy this! 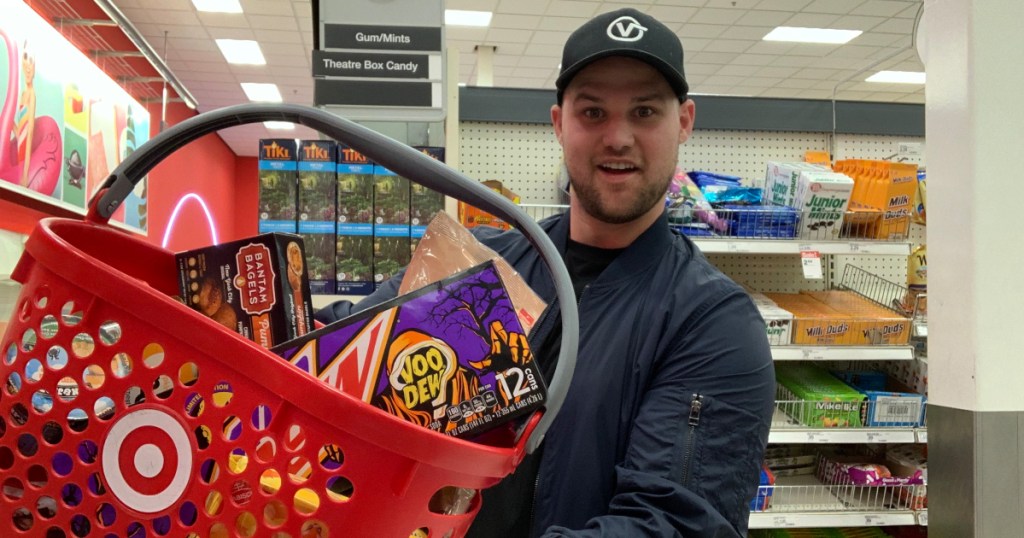 I really liked all of these items except for the Chobani yogurt, which I thought was really bland. My favorite treats by far were the Bantam Bagels with the Ben & Jerry’s Ice Cream being a close runner up. Go grab some seasonal goodies of your own and get ready for fall! Pumpkin PJs optional. 🎃

Keep up with all things Fall and Halloween right here!