Check out our list to see if your favorite 90s candy and snacks are available for purchase now! 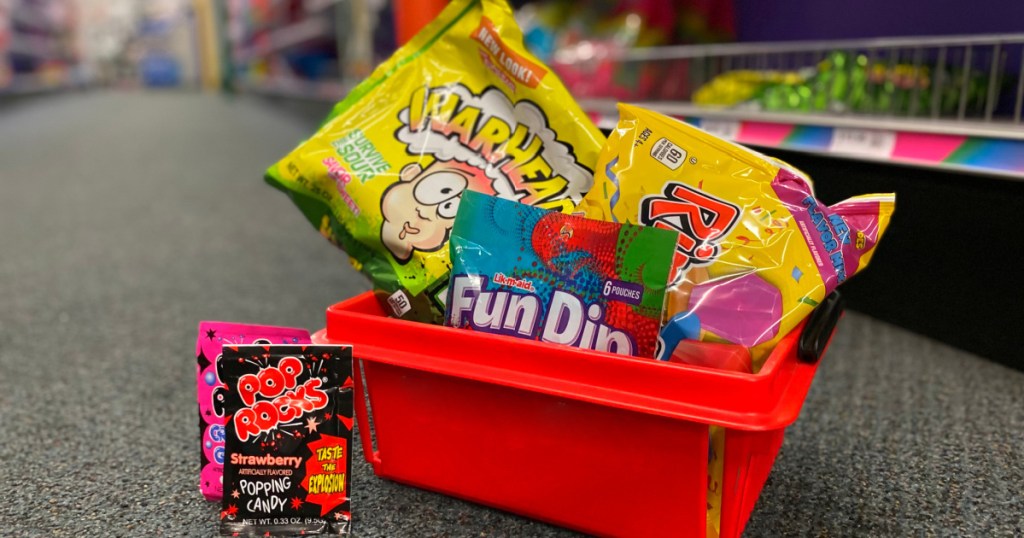 Though it almost feels like yesterday, the 1990s were an iconic era in time. The colorful, loud packaging of 90s does not get lost in translation when thinking of 90s candies. From boybands to fashion trends, some things act as a time machine, but 90s candy and snacks, including the ads for them, were truly unmatched.

You’re lucky we didn’t have to say bye, bye, bye to certain 90s candies, so let’s cue the nostalgia with this list of sweet 90s snacks you can still purchase today!

Please note that not all of these candies and snacks debuted in the 1990s, but they were ALL popular during that time. Prices and quantity vary depending on the store/location.

1. Dunkaroos were arguably the most notable 90s snack of them all. 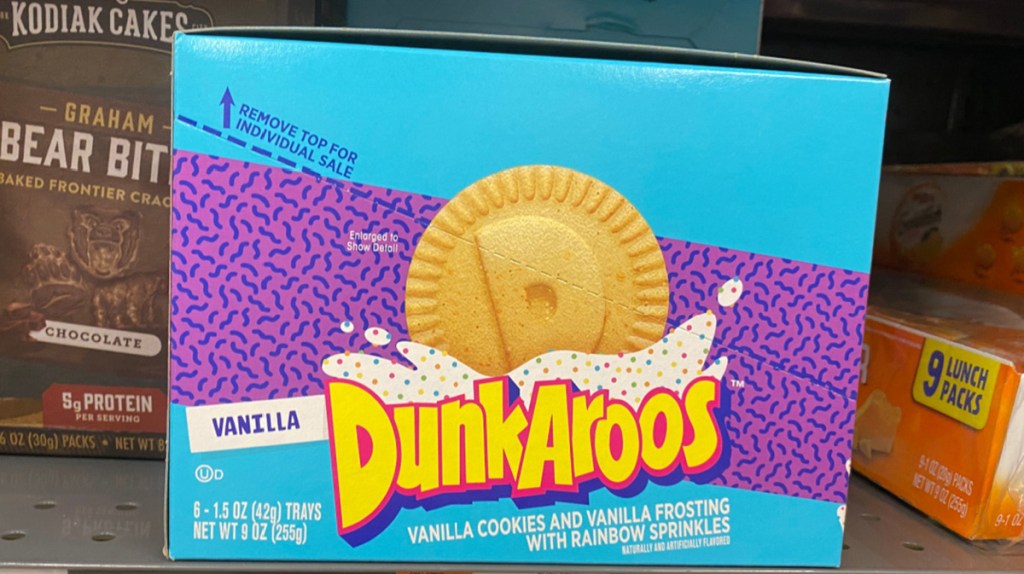 Originally appearing in the United States from 1990 to 2012, the 90s and early 2000s kids’ hearts across America were shattered when vanilla cookies were discontinued. However, Dunkaroos made a comeback in 2020, and you can now purchase them in select stores.

Here’s what reviewers on Amazon had to say:

“These are almost as good as they were in the ’90s, but slightly changed. Still taste great, but cookies are more like sugar cookies now.” – Elizabeth

2. Sno Balls were the tastiest cream cakes around. 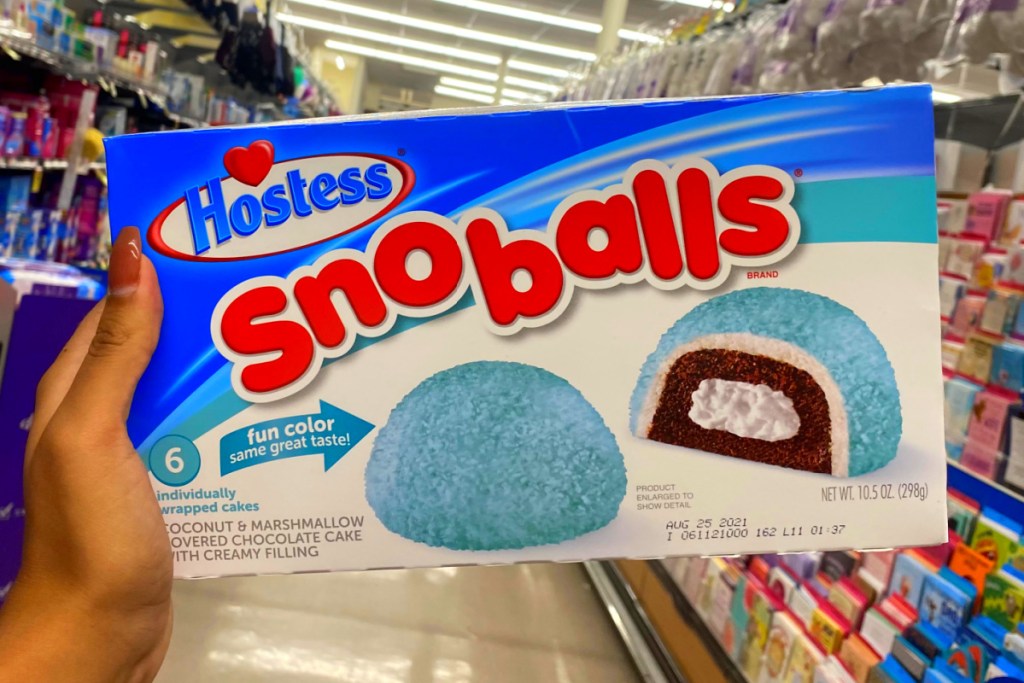 Coming in various colors but infamously pink, the marshmallow-coconut treat has been a staple in time for centuries, and the 90s was no exception. Keep an eye out for these treats next time you go to the store so nostalgia can set in for people of all ages.

3. Little Hug Fruit Barrels were the beverage of the decade. 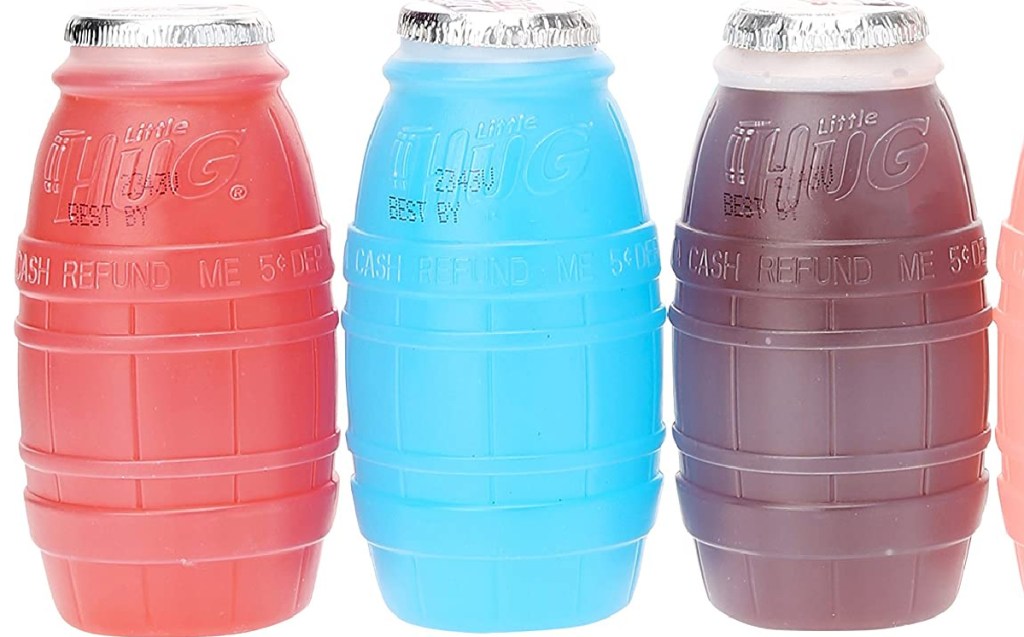 These were easily my favorite childhood beverage! I was drawn to the colors and how fruity the Little Hug Fruit Barrels tasted. While these brightly colored drinks aren’t at the top of the list for the healthiest treats for kids (and for the kids at heart looking for nostalgia), they’re only 10 calories, gluten-free, and aren’t caffeinated! 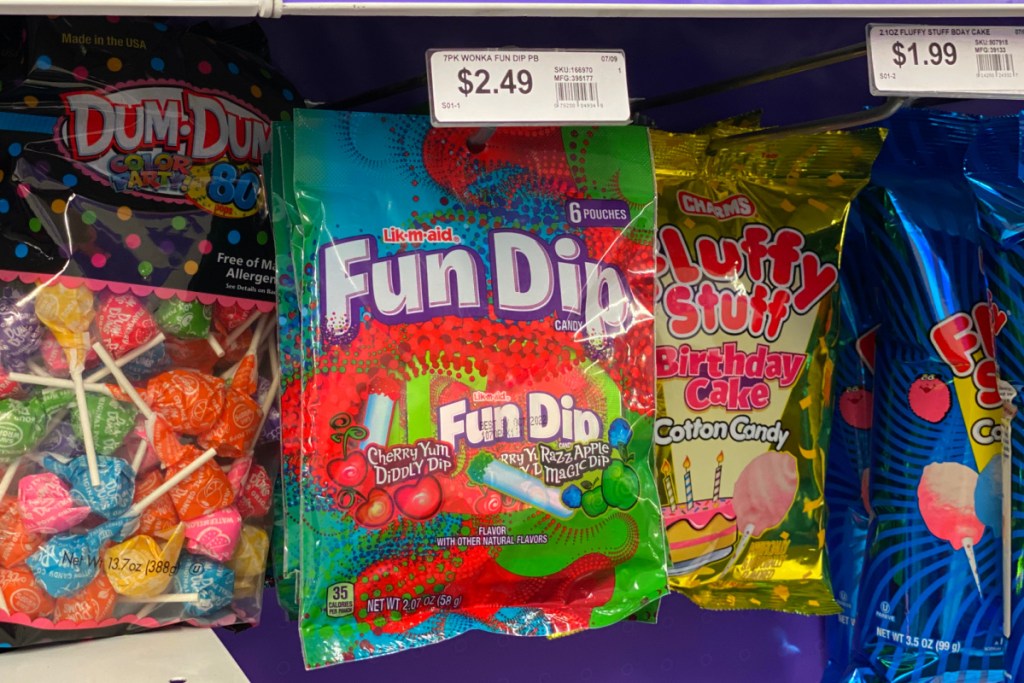 This 90s treat was very popular for every kids’ special occasion. Although it’s not the most nutritious snack, it’s still readily available in many locations.

5. What were you doing if you didn’t wear a Ring Pop as an engagement ring? 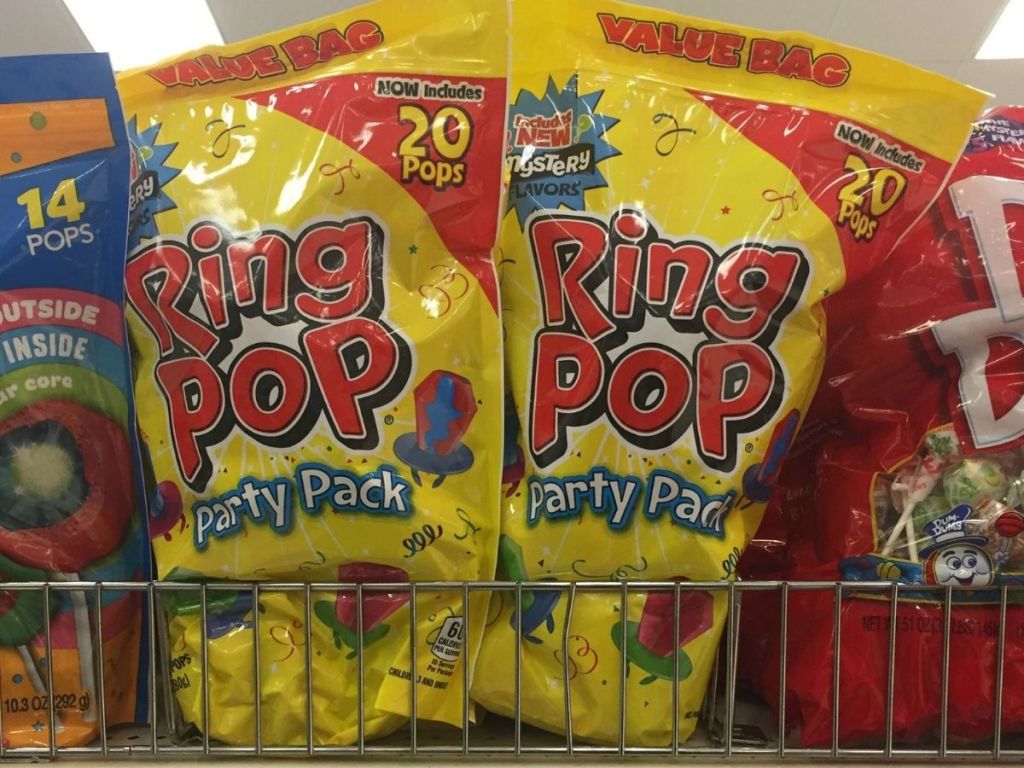 Still going strong with various flavors, Ring Pops was one of my top 90s snacks. We could use it as an accessory when playing dress-up while simultaneously enjoying a lollipop. I definitely couldn’t help but beg my mom in the grocery store for one every time we passed it. It’s still being sold in the mainstream snack industry and is still just as popular!

6. Would could forget drinking the sweet flavors of Nik-L-Nip? 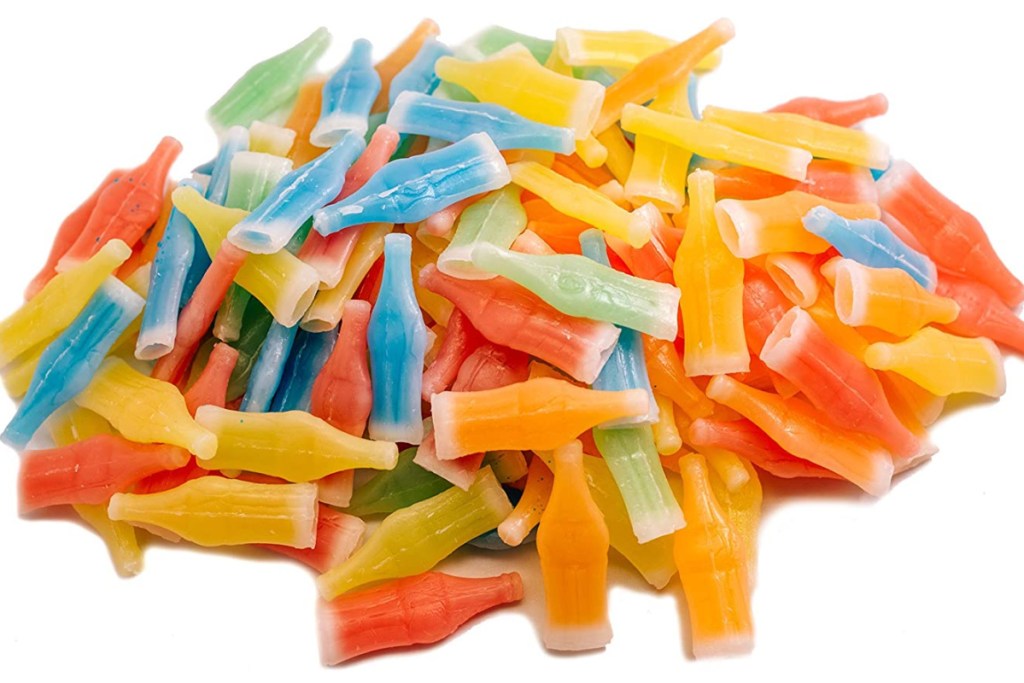 Nothing more entertaining than biting off the top of the bottle and drinking Nik-L-Nips: amusing and delicious! My Hip sidekick Emily loved these as a kid!

“I’m not sure why, but I was so obsessed with Nik-L-Nips when I was younger. I have the best memories of getting these from the store while stocking up for snacks before going to the drive-in as a family. Even though it’s the smallest amount of juice and biting off the top is truly just biting into wax, for whatever reason, they were my favorite! 😂” – Emily

7. eFrutti Snacks had us playing with our food even when we weren’t supposed to. 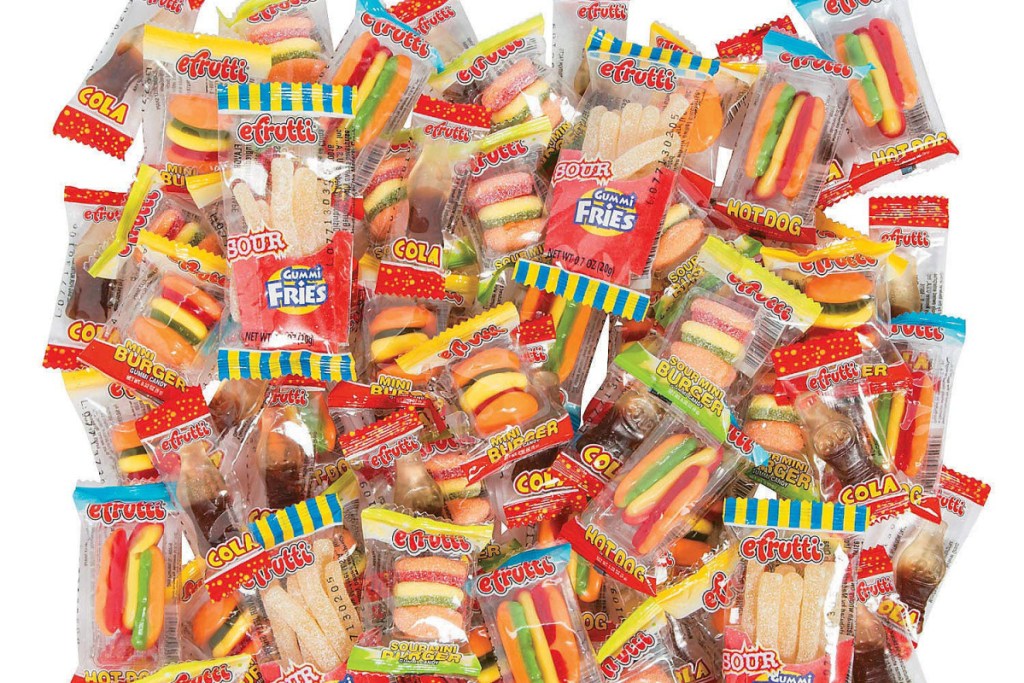 From pizzas, hot dogs, and hamburgers to cheesecake, popcorn, and milkshakes, the German treat is known as eFrutti offers various gummy versions of actual food. I don’t know what it is about having mini gummy versions of real-life food, but it’s just as yummy as it is adorable!

8. The classic Chick-O-Stick was the perfect balanced combo of coconut and peanut butter. 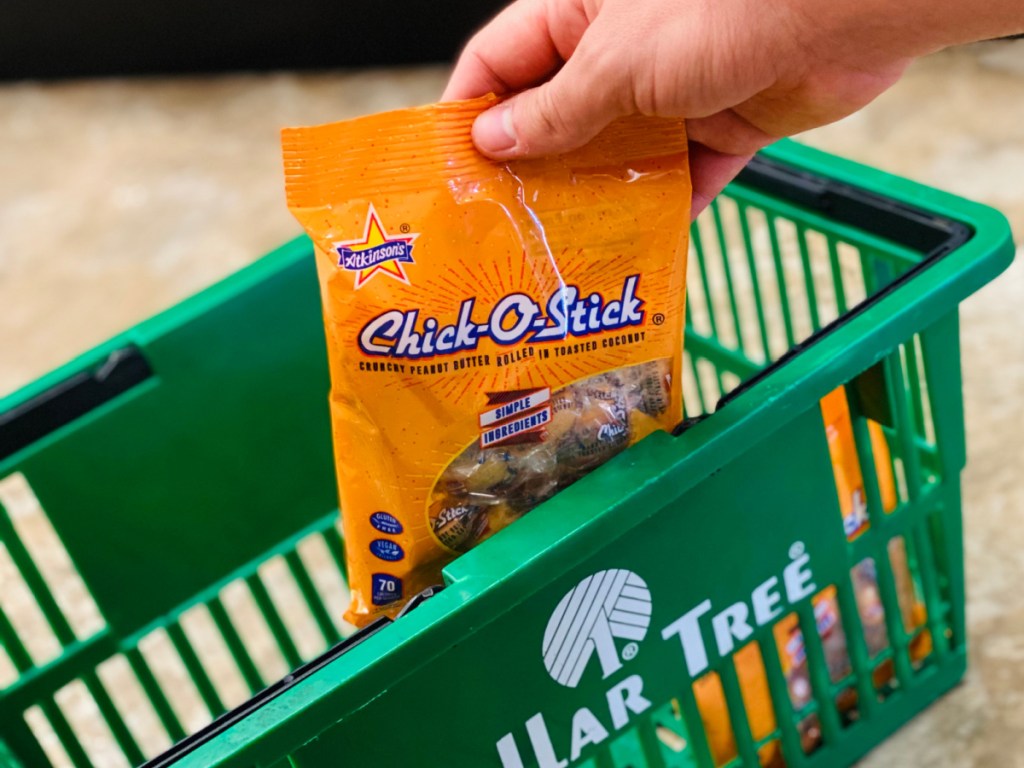 Similar to Butterfingers without chocolate, the old-school candy, known as Chick-O-Stick, was a staple candy passed out for Halloween and extremely popular in the 90s. If you love peanut butter and coconut, this is a can’t miss treat!

9. Tasting (and hearing) the explosive Pop Rocks was an unforgettable experience. 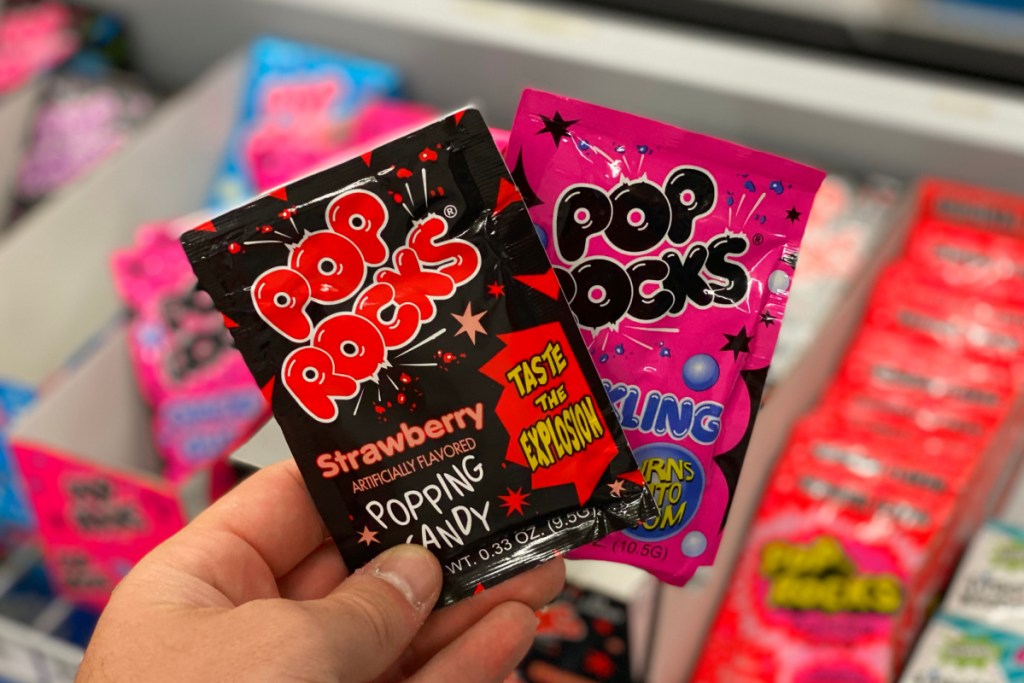 Ever wonder how Pop Rocks… pop? Carbon dioxide is released, causing the sizzling sound. While it’s not necessarily harmful, it may have caused a stomach ache or two, but for a 90s kid, the entertainment was worth it. 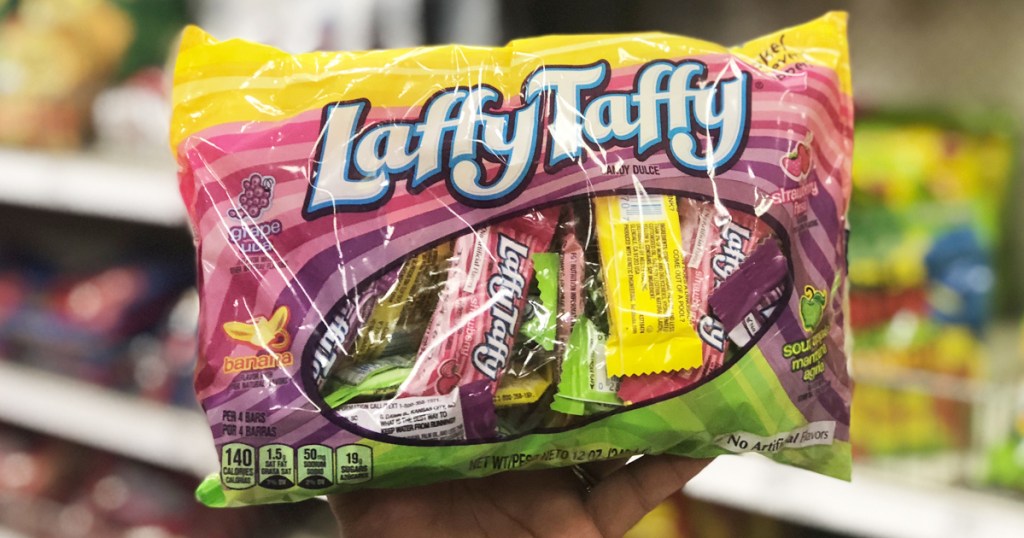 The genius name of Laffy Taffy described its goal and what it is: to make you laugh while eating taffy. Another fun thing about them is that all the jokes are written and sent in by children, and they’re still making us laugh today!

11. Who could resist eating as many Nerds as possible at once to intensify that tangy flavor? 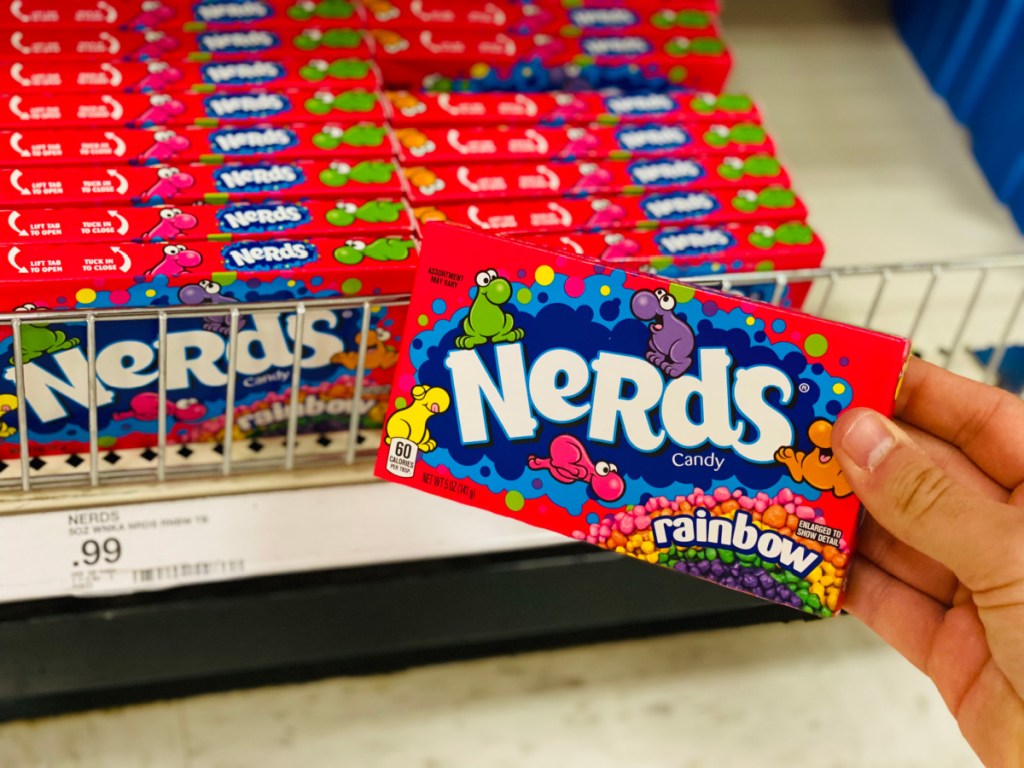 My favorite part of this candy was the packaging. I couldn’t get enough of the adorable animated Nerds characters. Fun fact, each color nerd is a different concept, including Pink as Curiosity, Purple as Deep Thinking, Yellow as Logic, Red as Creativity, Green as Humor, and Orange as Spontaneity.

This tidbit of info is a great way to educate kiddos about the pleasures life has to offer while indulging in some candy, and you can read more stories with your little ones on the Nerd’s website!

12. Cry Baby Gum had us holding back the tears. 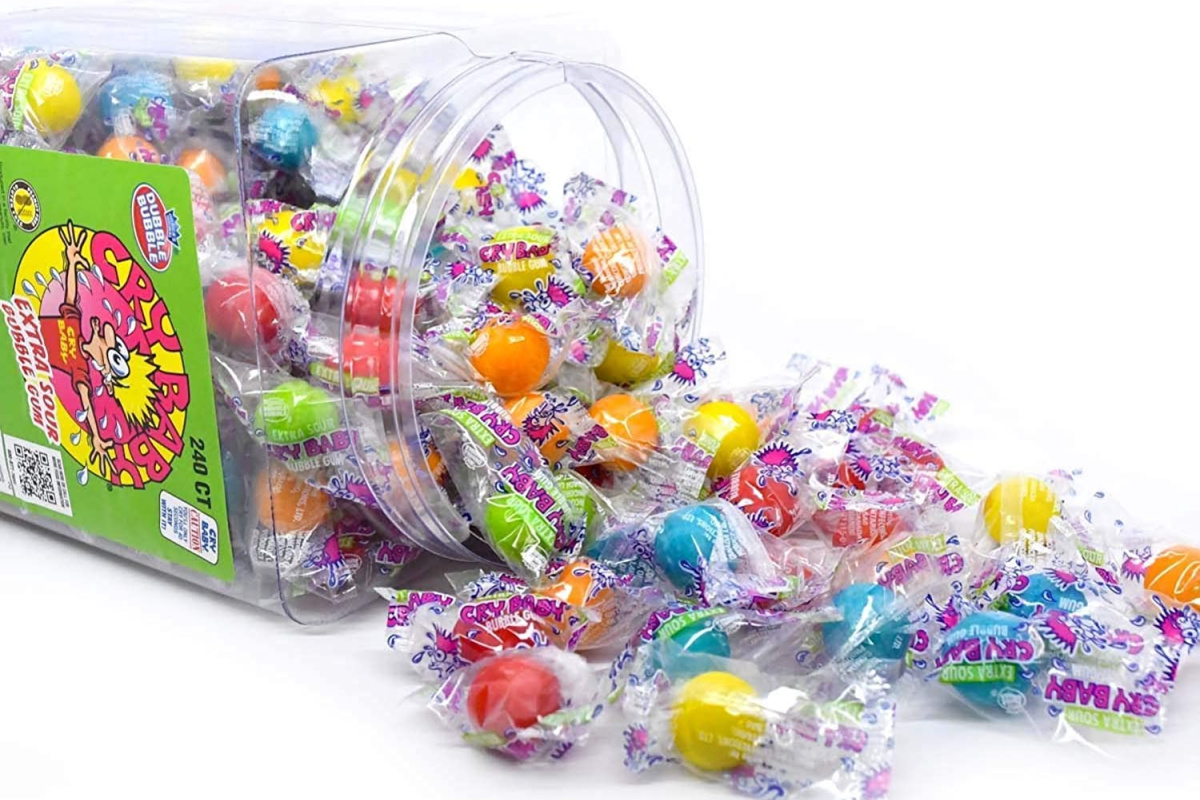 This sour gum known as Cry Baby Gum came out in 1991 and remains a perpetual moment in the history of 90s candy. Even though it’ll make your eyes well up from a puckering punch of sour, the fun flavors will keep you coming back for more!

13. We played with Push Pops more than actually eating them. 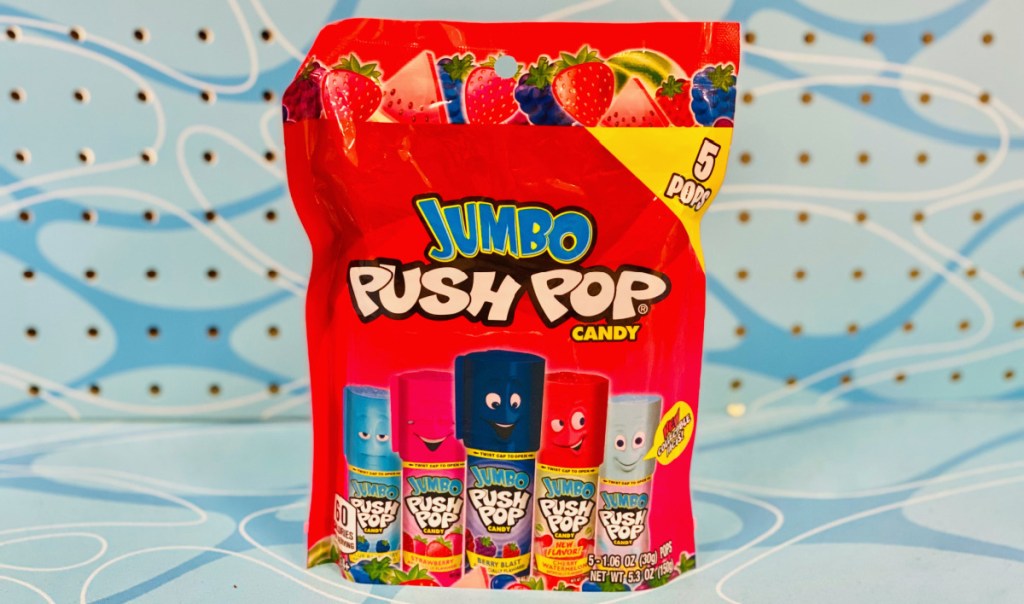 Though the packaging has slightly changed, I will forever appreciate Push Pops as a reminiscence of my childhood. These are still great for birthday parties and other kid events!

14. The colors of Candy Buttons made them irresistible.

They may not have necessarily tasted like anything (let’s be honest, we all found ourselves eating just as much of the paper backing 😂), but Candy Buttons had so many colors making it impossible to pass by without purchasing! 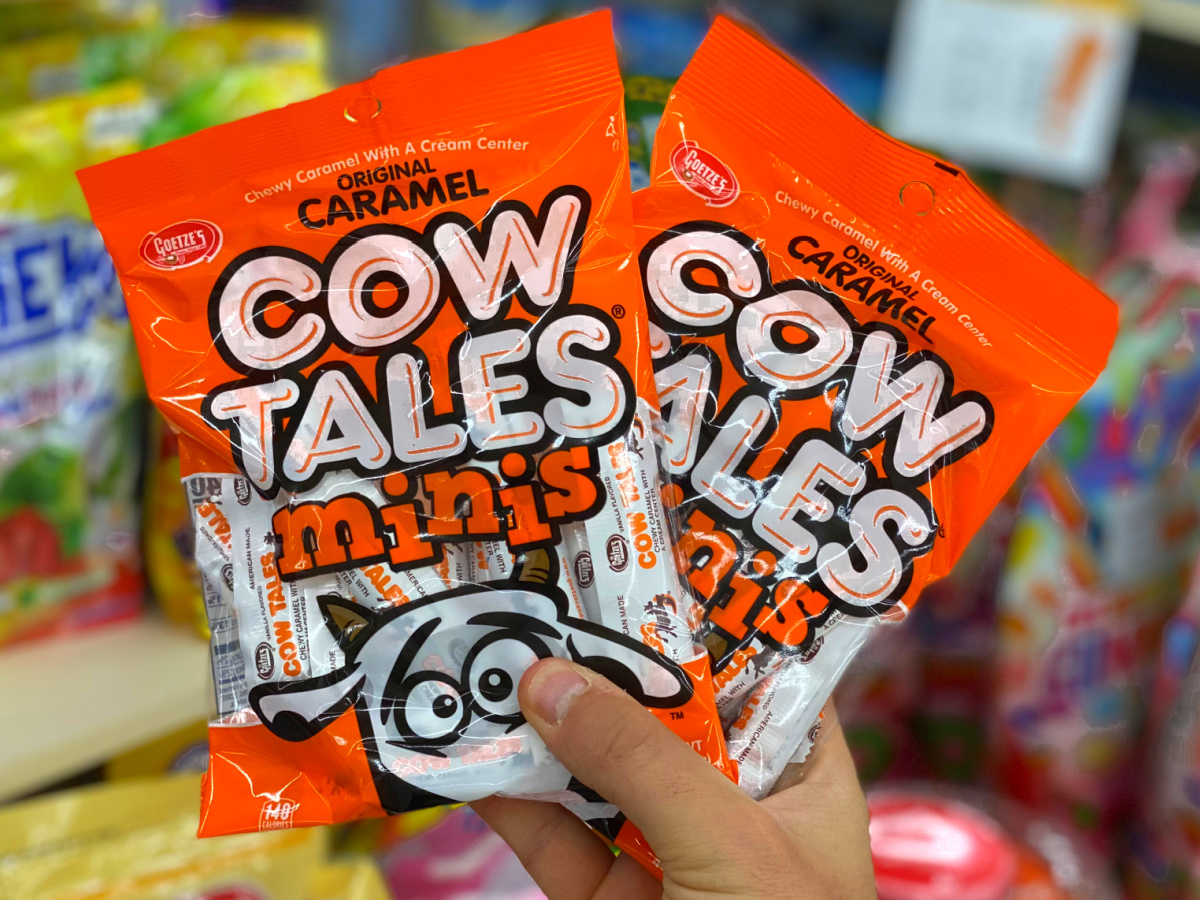 This one was a Hip2Savers’ fan favorite! Made of caramel and cream, Cow Tales were a staple in the 1990s snack industry. Luckily, we never had to say goodbye to them, as they are still available in many grocery stores and on Amazon!

Here are some comments about Cow Tales Candy from other Hip2Savers:

“I love the caramel-flavor Cow Tales, but you can only find them in certain places!” – Tiffany

16. The temporary tattoos from the five-flavor Fruit Stripe Gum were the best part. 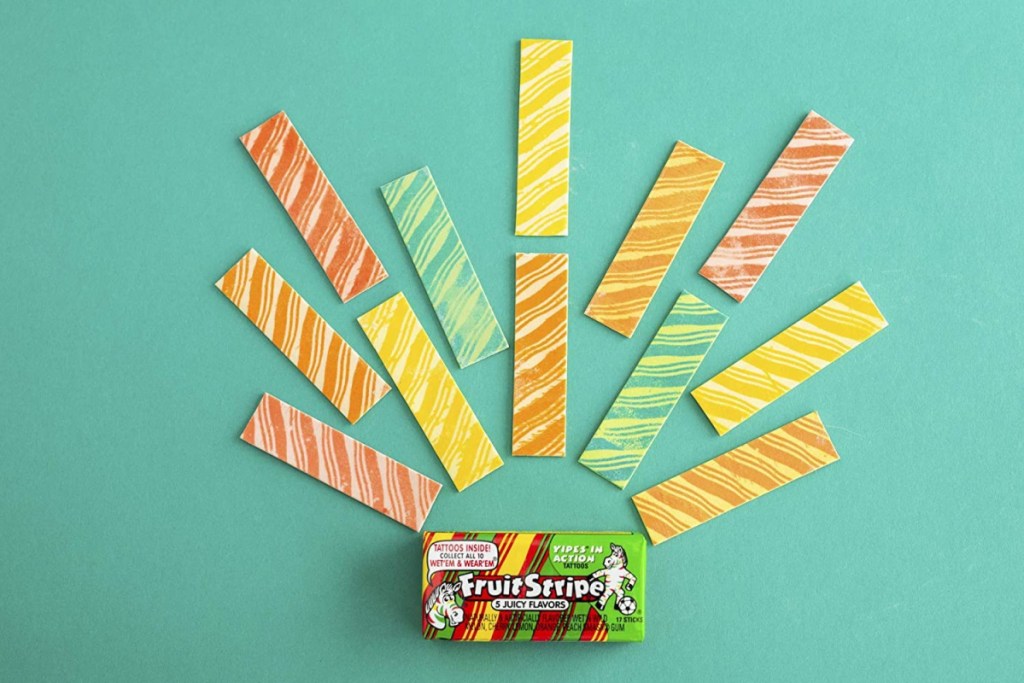 I feel like no one really purchased Fruit Stripe Gum for the flavor, as it was gone as soon as it came, but the childhood flashbacks make it fun to purchase once in a blue moon. Anyone else love applying the tattoos from the wrappers? 🙋‍♀️

17. Dare each other yet again to see who will rise to the WarHeads challenge. 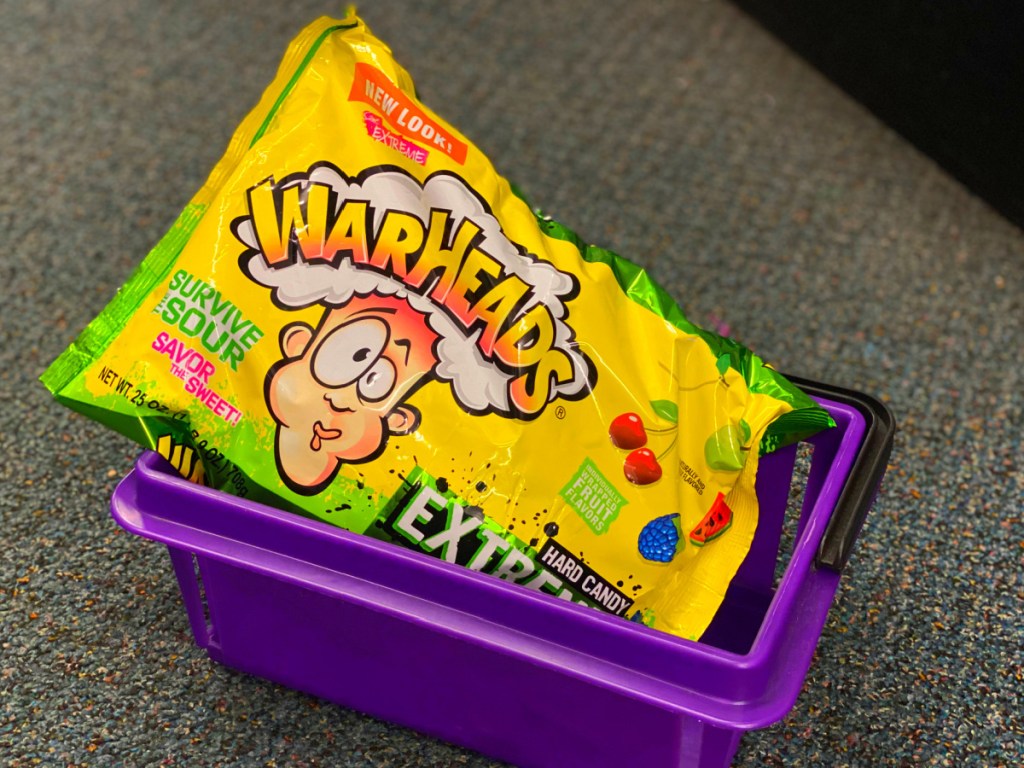 Coming to the USA in 1993, this Taiwanese 90s candy was extremely popular. With all of us daring each other on the playground to eat these without tearing up, it’s no wonder that by 1999 WarHeads had become a $40 million brand. Of course, if you enjoy sour candies, this was probably a breeze for you!

Last summer, Warheads took on creating alcoholic drinks, specifically spiked seltzer. If you’re over 21 and want to enjoy the nostalgia, be sure to try it! Who knows what else they have up their sleeve this year…

18. Whatchamacallit made it impossible to forget the name. 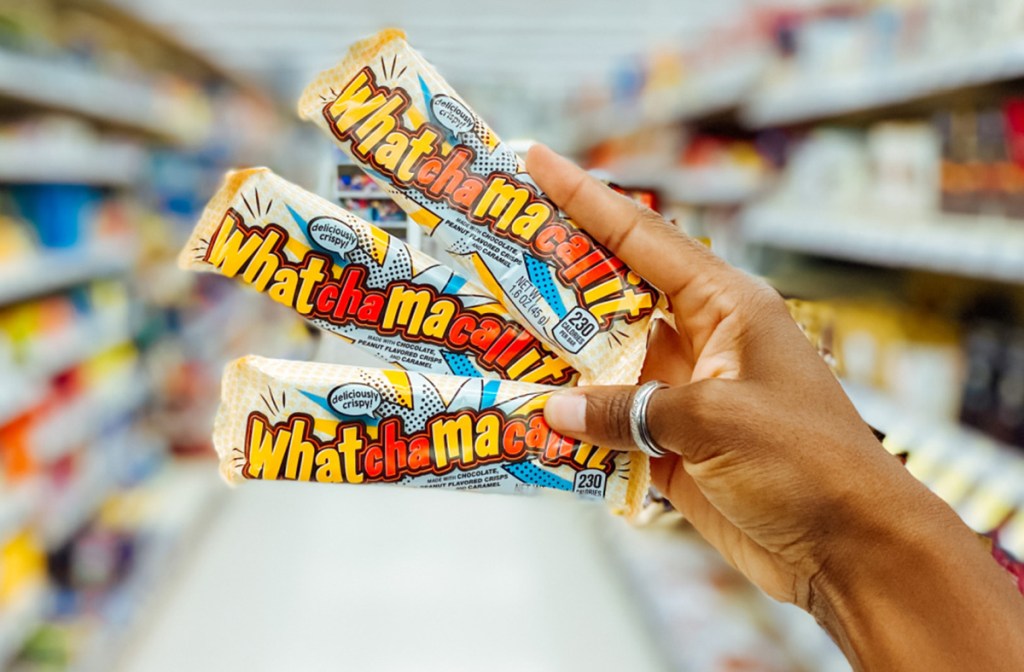 Created by Hershey, Watchamacallit is a lasting candy when it comes to 90s snacks. While they aren’t at every store, they can be commonly found in the candy bar section at checkout and are worth grabbing when you come across them!

19. Hubba Bubba Bubble Gum Tape was in its prime in the 90s. 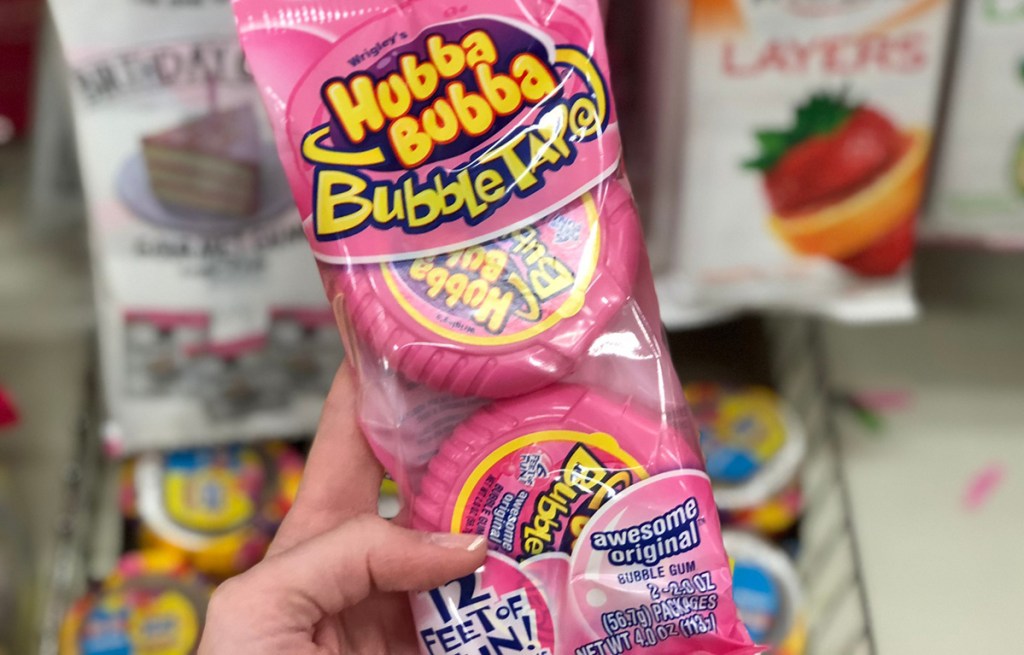 Although not every variation is still around, the infamous pink gum tape isn’t going anywhere for a long time. As a kid, once I tried rolling out and chewing the whole thing at once. Although I don’t recommend that, it still brings me a sense of nostalgia every time I see it at the grocery store. 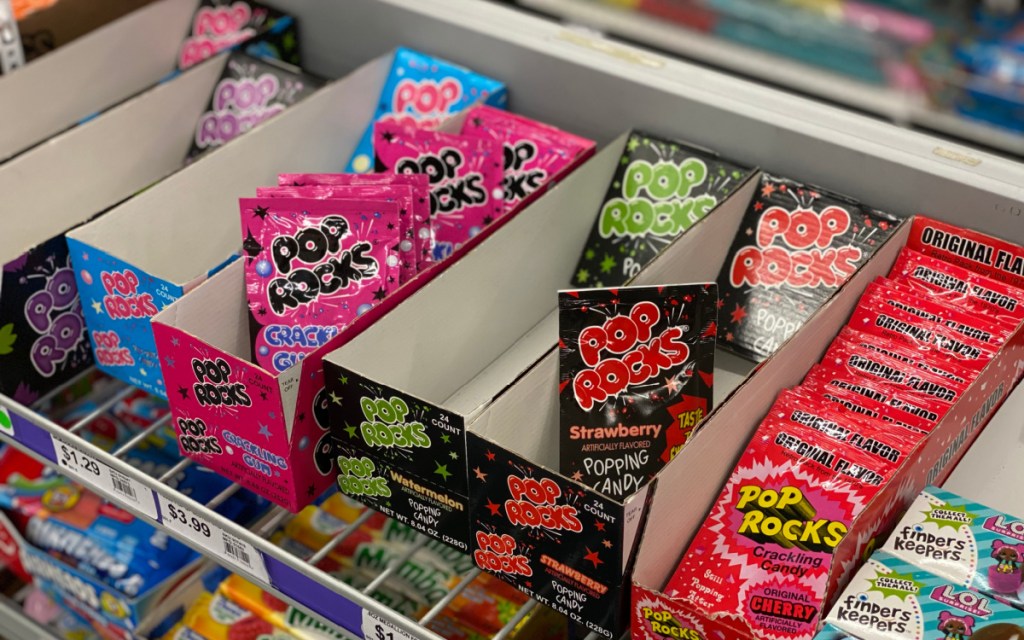 Whether you’re enjoying these 90 candies as a token of your childhood or bringing them into your little one’s life, it’s comforting to know that the option of jamming out to your fave boyband’s soundtrack while indulging in some nostalgic snacks is still on the table!

Save big at your favorite stores with the best story shopping hacks! 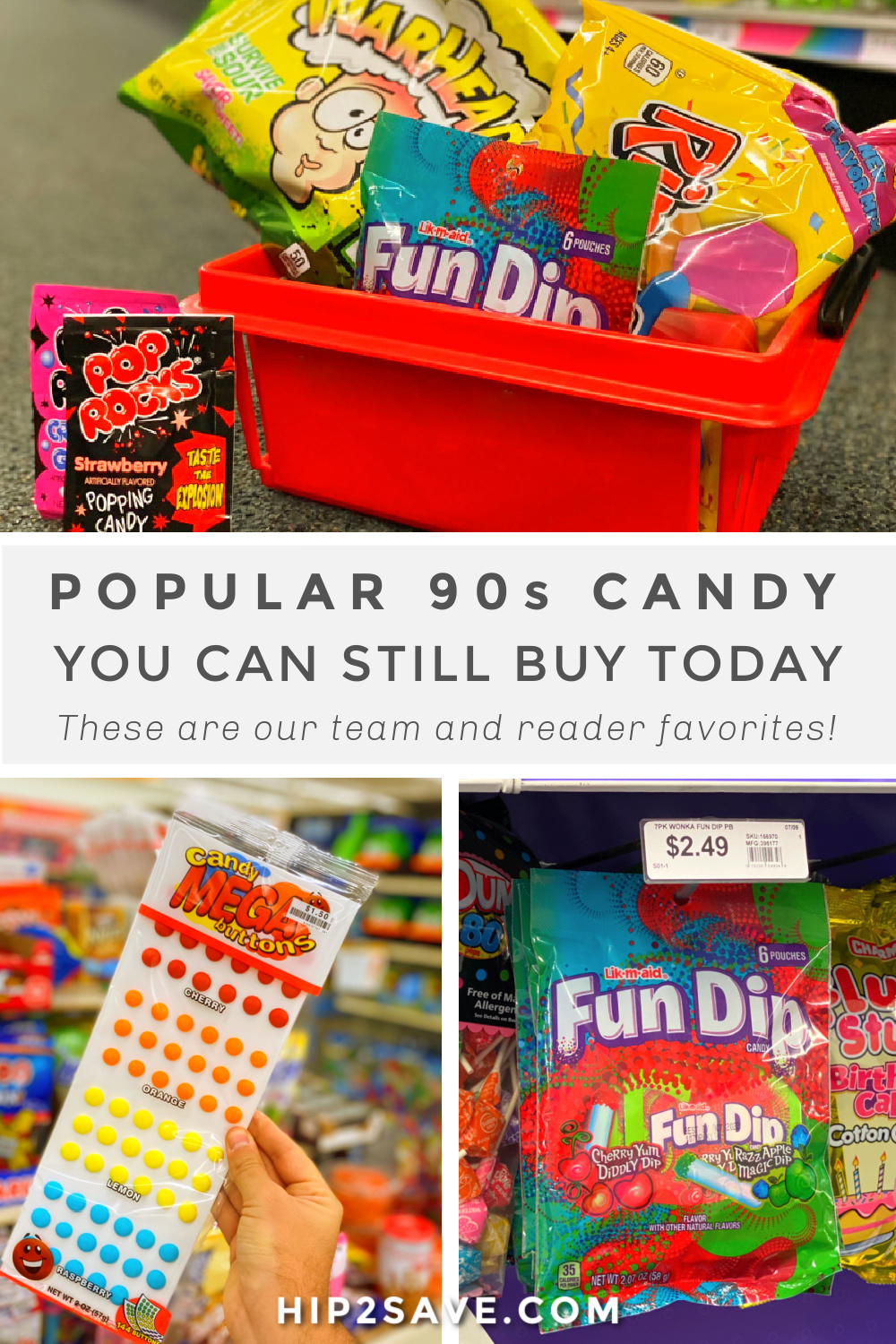