How Much Should You Spend on Bath Towels? (+ 5 Brands We Love!) 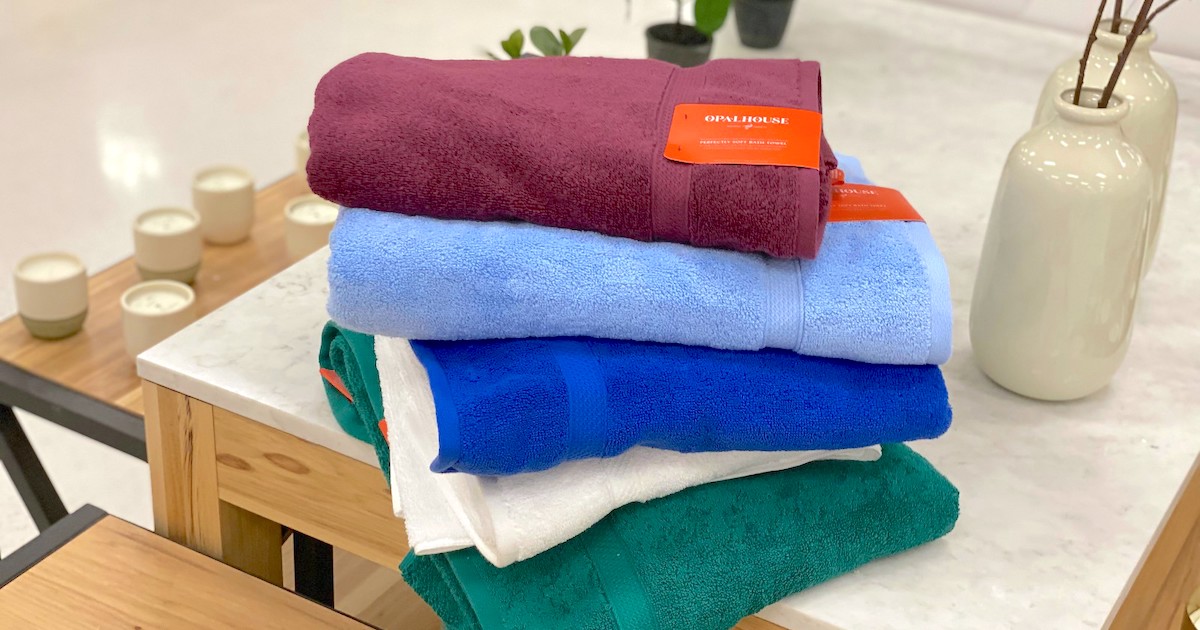 Is spending more really worth it?

We’re debating on how much you should really spend on bath towels, and after hearing from the entire Hip2Save team, we’re also sharing the 5 best towels to buy on a budget. Our picks are soft, high-quality, and will actually last.

Keep reading for all our top towel recommendations, tips, and team feedback on how much we spend! 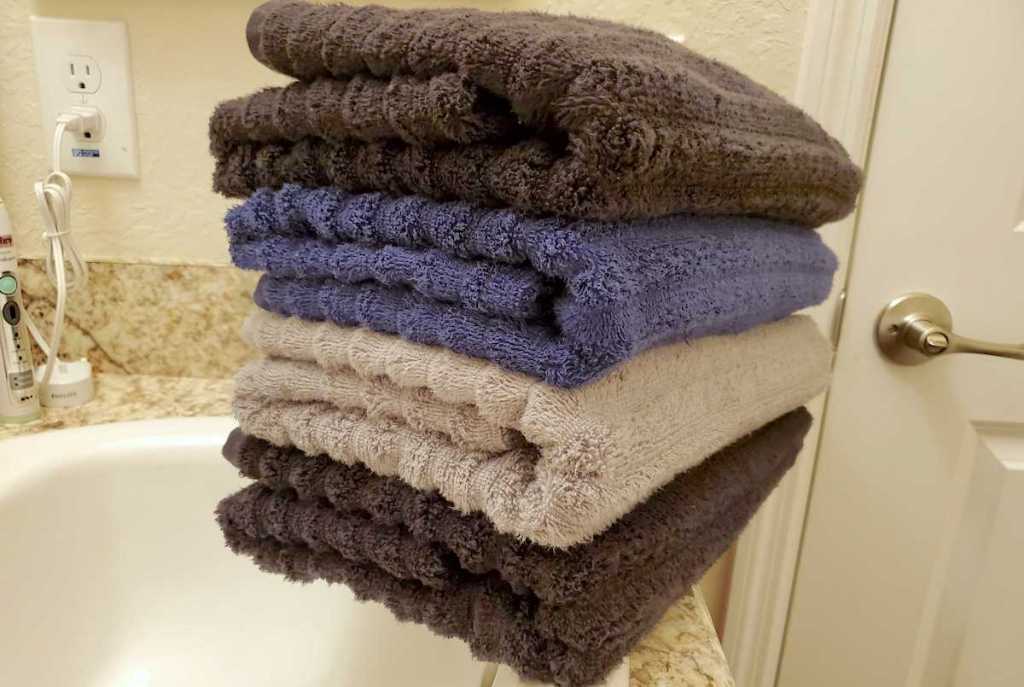 By having a unique textured bath towel with zero-twist cotton loops, you’ll have an extra fluffy & luxurious feel every time you step out of the shower. Plus, as my Hip sidekick, Rachel stated, they’re extremely quick-drying and so far she’s experienced no fading with the rich colors she chose.

Speaking of color, they come in 12 different variations and start just under $4 so there’s something for every bathroom and every budget. Win, win! Just keep in mind, Rachel recommends washing them a couple of times before using to get rid of any excess lint most towels have anyways. 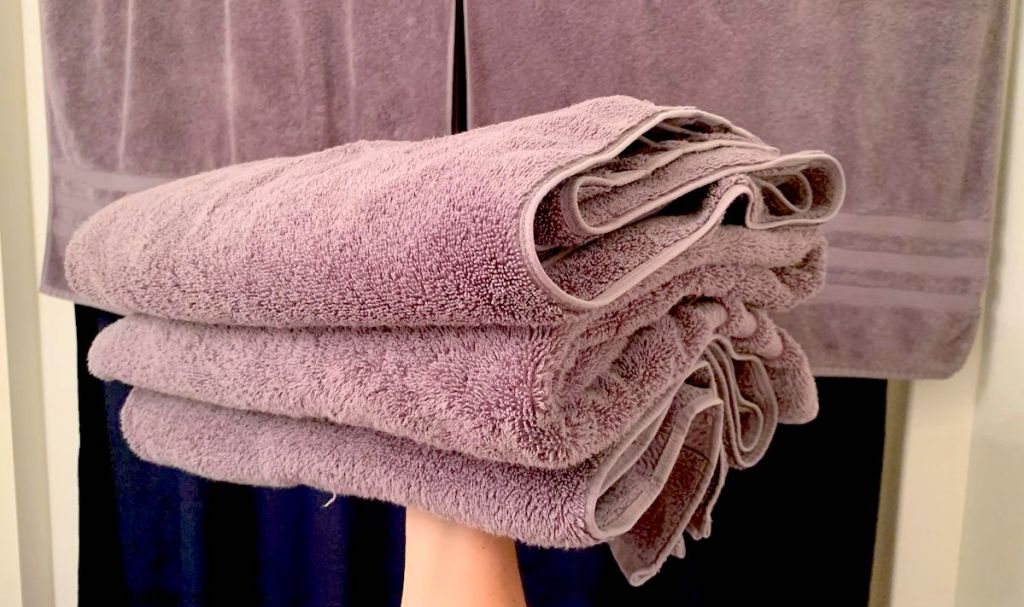 According to my Hip sidekick, Chelsey, these affordable 100% cotton bath towels never fall apart and are great at holding their color! If you’re a Sam’s Club member, you can score a set of these oversized towels at an amazing price! Not only are they oversized, extra soft, and super-absorbant, but they’re also cosmetic-friendly so they’re resistant to fading from all your favorite beauty products. 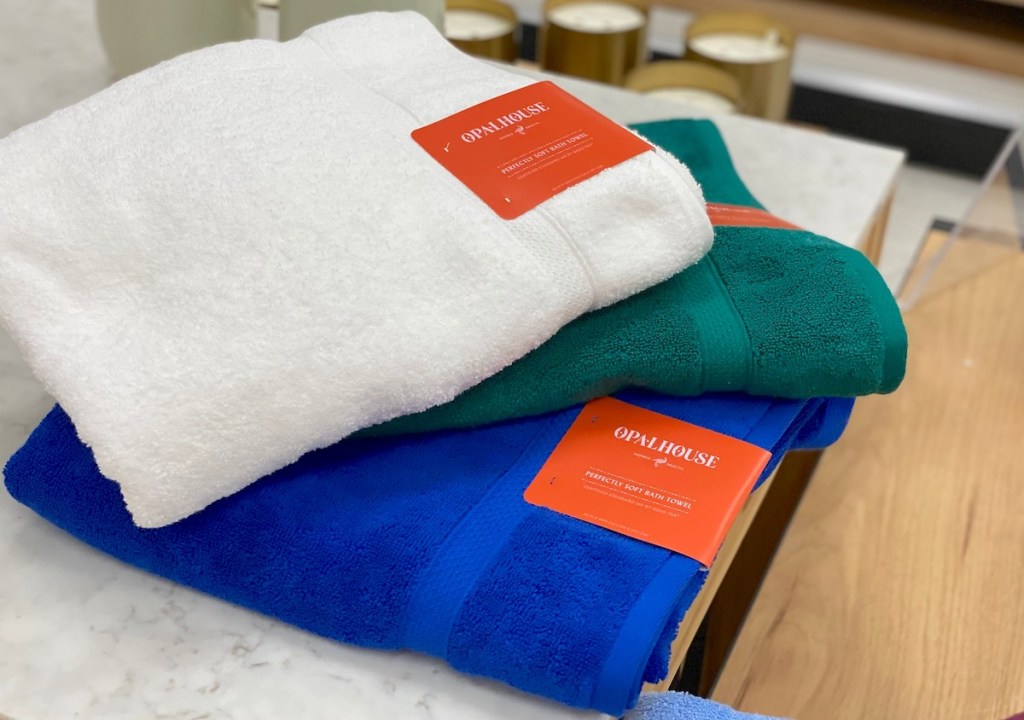 If you needed another reason to love Target, these bath towels are it and they come in 15 different colors, including a rich gem-toned emerald green color (my personal favorite 😍). Most importantly, they’re OEKO-TEX certified, meaning they’re completely free of harmful chemicals and safe for humans to use. You’ll never know how you used anything else before! 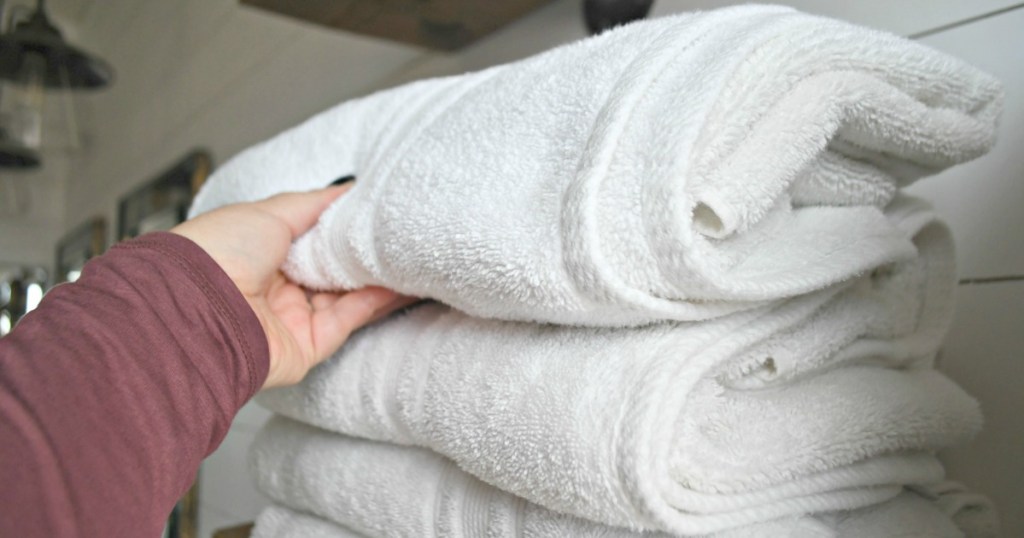 Lina on our team has been using these towels for over two years and she said that they’re still fluffy, thick, and they haven’t piled for frayed. These towels are designed with Hygro cotton, meaning they have a patented spinning technology using a hollow core cotton yarn which makes them ultra-soft and quick drying. So if you’re looking to replace all your towels, as Lina did, these will be sure to check off all the boxes on your must-have list. 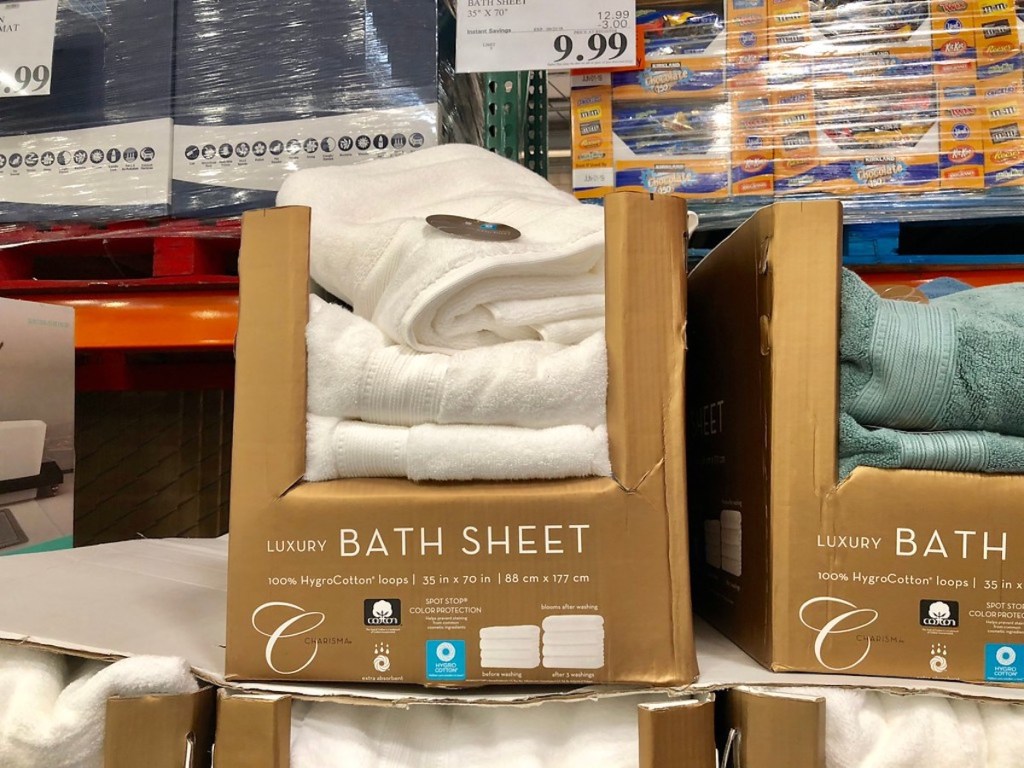 As a bonus, if you’re a Costco member they’re also available online or in-store at a great price! You can scoop up regular bath towel sizes or bath sheets. Plus, they’re normally $12.99 each, but they occasionally go on sale for just $9.99 so keep your eyes peeled! 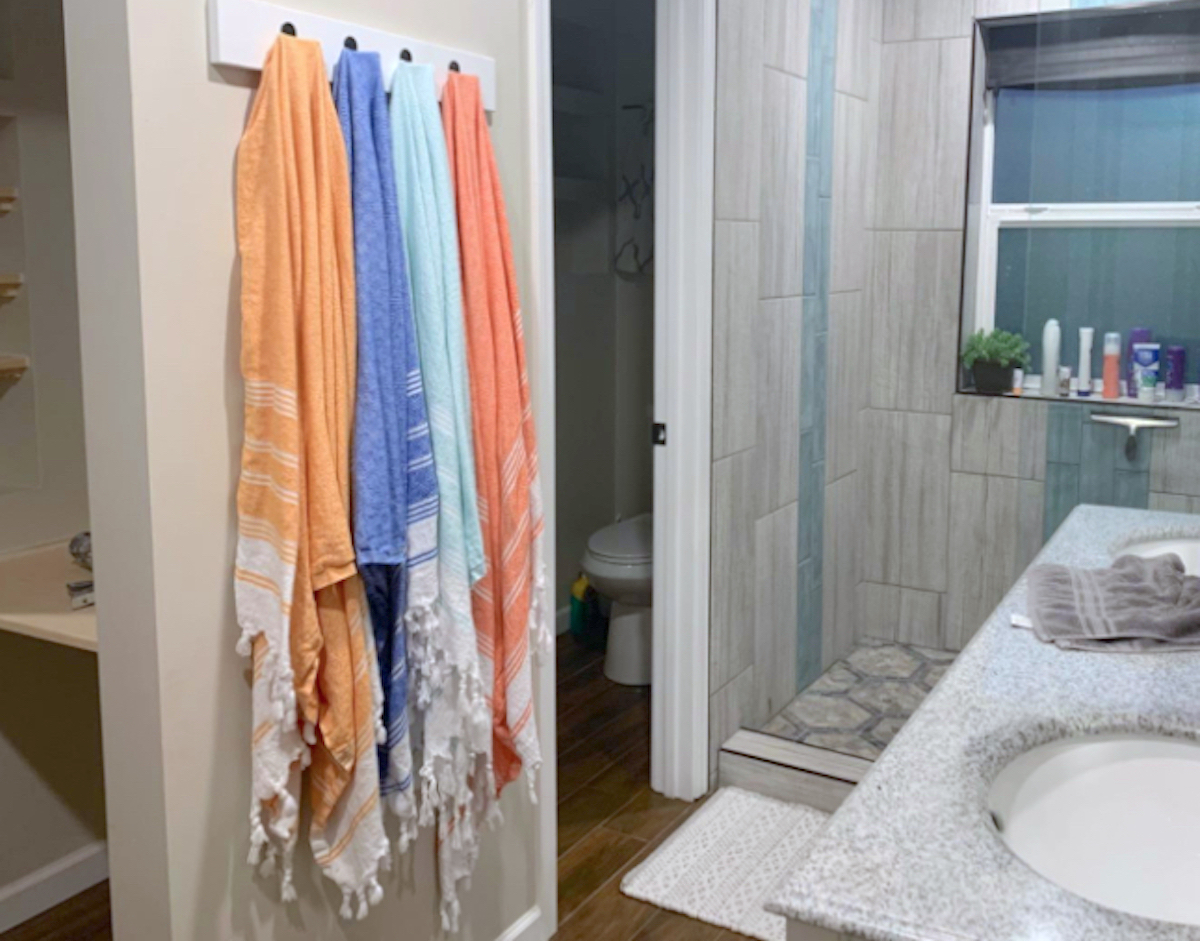 If you’re short on space, you’re going to love how small these cotton Turkish towels fold up. Not only are they my Hip sidekick, Holly’s favorite towels, but they’re also the best-selling Turkish towel on Amazon and rated one of the best by The Spruce!

They’ll take up a fraction of the space compared to regular bath towels and are so pretty to look at no matter where you put them. Given their high-quality diamond weave, they’ll also dry quicker than any other towel you’ve owned!

Let’s talk about how often should you wash your bath towel: 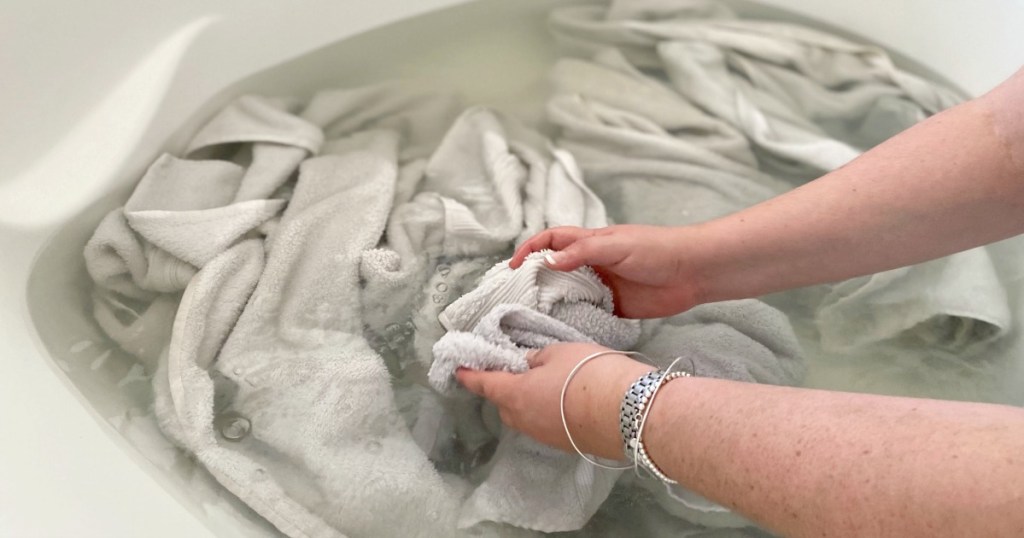 You can extend the life of your towels by avoiding unnecessary laundering. It’s recommended that you wash your bath towels after every 3-4 uses. Make sure to hang your towel immediately after each use as proper air circulation encourages faster drying and reduces the risk of mildew and bacteria.

A few additional things to keep in mind:

Hip Tip: Bring your towels back to life by giving them a deep cleaning. Thanks to Lina, we just learned how to do laundry stripping – great for your everyday towels, and you probably didn’t even realize they were that dirty, to begin with!

I’ve broken down our team’s feedback based on whether each of us goes for the cheapest options (SAVER), if we look for the solid middle ground (MID-RANGER), or spend all our money on lush towels (SPENDER).

Here’s what the SAVERS had to say: 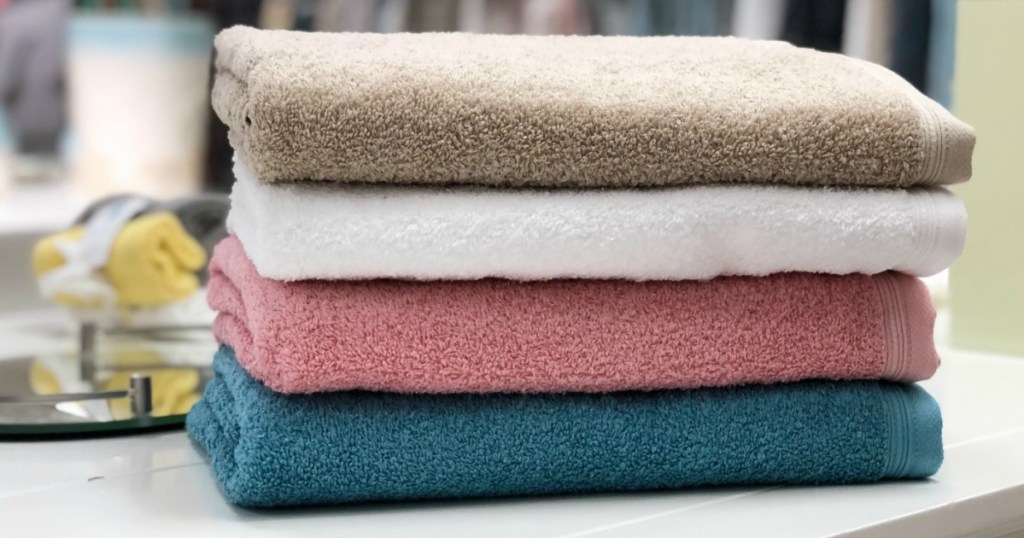 “I like to spend less, so I grab white cheap towels from Walmart. I like to add a little bleach to the wash every so many washes to keep them white. I don’t really care about them. It’s like pajamas for me. I can’t spend on those either—No one sees them LOL! (It’s old tees, leggings, or sweats!)” – Amber

“We have super cheap white ones from Amazon. I like to bleach them every now and then, so going with an inexpensive towel that I can be harsher with is the way to go for me.” – Emily

“In our house, the guest bathroom and kid’s bathroom have towels that are easily replaceable and they are all white so I can clean and bleach them without worry.”  – Stacy

Here’s what the MID-RANGERS had to say: 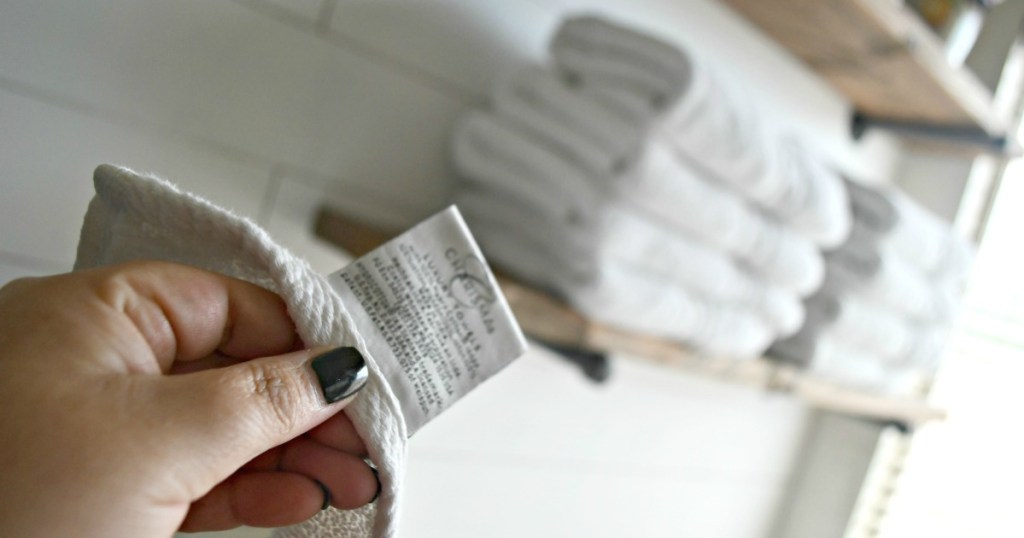 “I’m a mid-price range towel girl. I don’t like the cheapo ones, but I also don’t spend a fortune on them, either. I usually buy nicer brand ones at places like TJMaxx.” – Michelle

“My dream towels are the Turkish ones from Restoration Hardware, but for now I’ll settle for Charisma line from Costco. (See my review.) My thing is I don’t like them too small – the larger the better for bath towels!” – Lina

“I’m a mid-range girl too! I don’t like cheap towels, but at the same time, I don’t want to spend a ton either. Wash, dry, done.” – Jennifer

And here’s what the SPENDERS had to say: 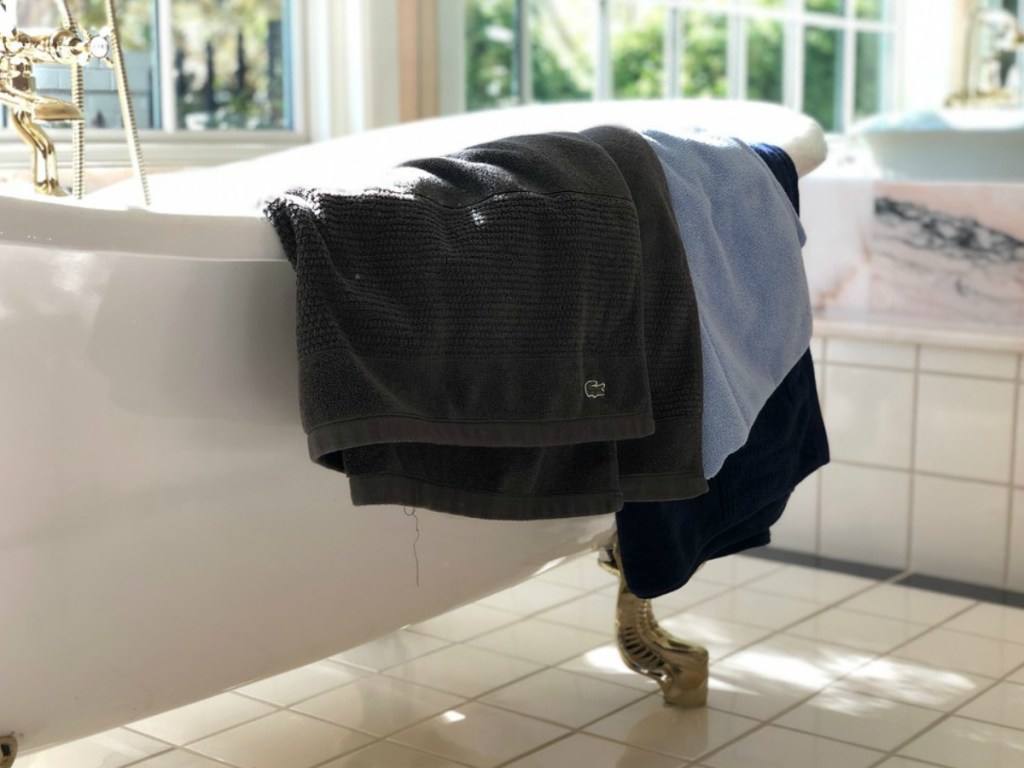 “There’s something about wrapping yourself up after a warm shower or bath in a high-quality towel versus settling for something cheap. As I’ve gotten older, I’m all about the higher-quality items that not only last longer but give you the experience of luxury! I currently love the Lacoste Legend Supima Cotton Bath Towels from Macy’s. They are large, thick, and such high quality, plus they often go on sale!” – Collin

“I do spend extra on towels for our family, but not for extra fluffiness. We have a large family & big towels take up so much space. We splurge on Turkish towels from Amazon because they work wonderfully, are thinner, and dry quickly. I love that I can stack a whole lot more in the cabinet.” – Holly

“I used to be a cheap towel person, and then my husband got fed up with the towels we had and got rid of ALL of them. We went to Sam’s Club and bought a bunch of new ones, and they were a little more spendy but SO worth it. They are so soft, and I can definitely say I’ll be spending more on towels if these ever start to not be so soft. We’ve had the Sam’s ones for a little over a year now, and they are still just as soft as day one!” – Chelsey

How much do I spend on bath towels?

Whenever I need some new towels, it’s because I’ve totally had it with the ones I currently have so I’m looking for new ones in a pinch. That said, I can always turn to Home Goods for quality towels at a decent price.

As for the color, they always have white ones in stock, which is my favorite to buy since I just bleach them frequently to keep them fresh and crisp. I know bleach isn’t normally the best way to clean whites, but it’s my favorite. With having 3 kiddos, towels tend to get used and abused in our house, so I can’t justify spending a ton on them. I do still care about the softness though, so I just feel for whatever’s softest in the store and run from there!

Thinking about bedding, too? Check out our team’s favorite sheets! 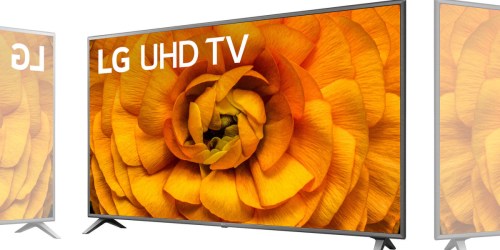 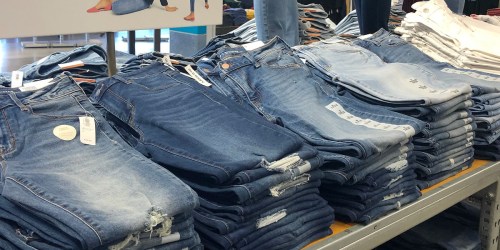 Old Navy Jeans for the Entire Family from $8 (Regularly $20+) 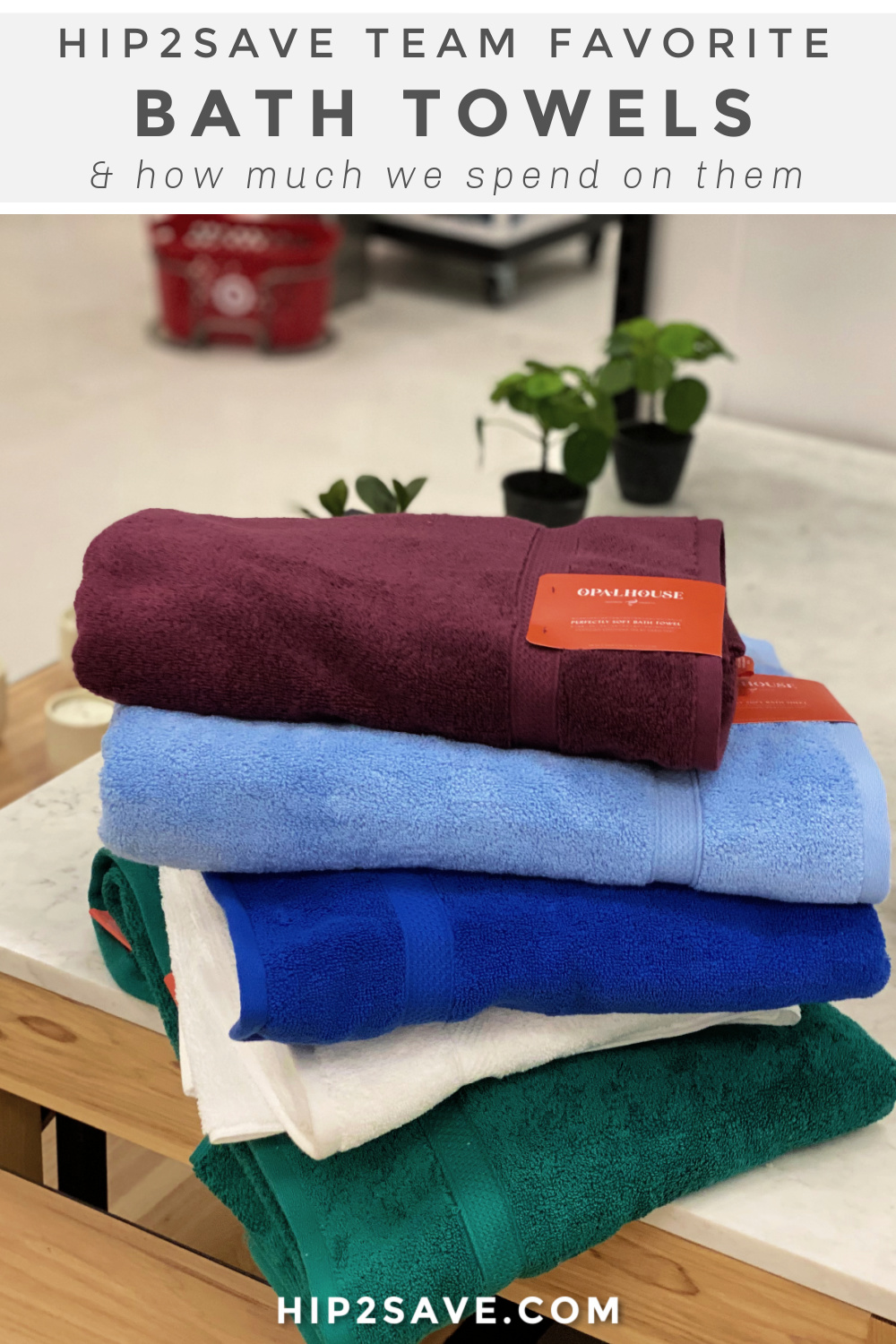