Have you heard of The Salad Bowl Game? This FREE party game is perfect for your next gathering! 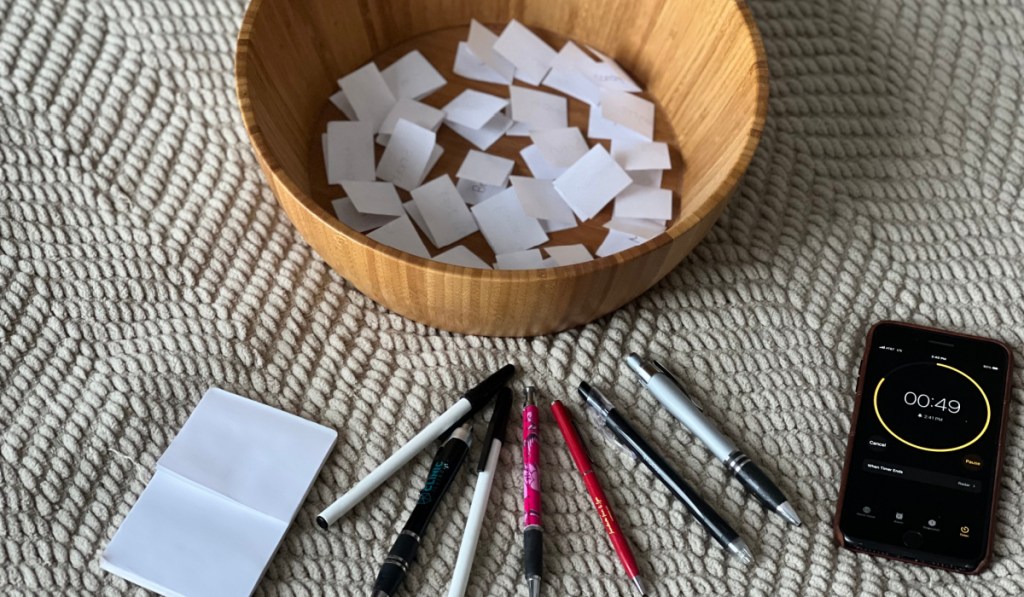 If you love charades, you must try The Salad Bowl Game. 🥗

Looking for a fast, fun, and FREE party game for your next gathering? We have just the game for you to try! We’ve been hearing a lot of buzz about The Salad Bowl Game.

It’s an easy game that combines elements of Charades and Taboo. We tested it out and it’s super simple to learn. Plus, the supplies you need to play are most likely already in your home.

The Salad Bowl Game is appropriate for almost all ages so the kids can join in too! It’s best played with a group of 6 people or more so it’s perfect for your next holiday, family gathering, or party. Unlike some board games, if you have a BIG group, that is no problem! When it comes to this game, the more the merrier!

Have we piqued your interest? We have The Salad Bowl Game instructions for you. Keep reading to learn how to play!

Here’s how to play The Salad Bowl Game: 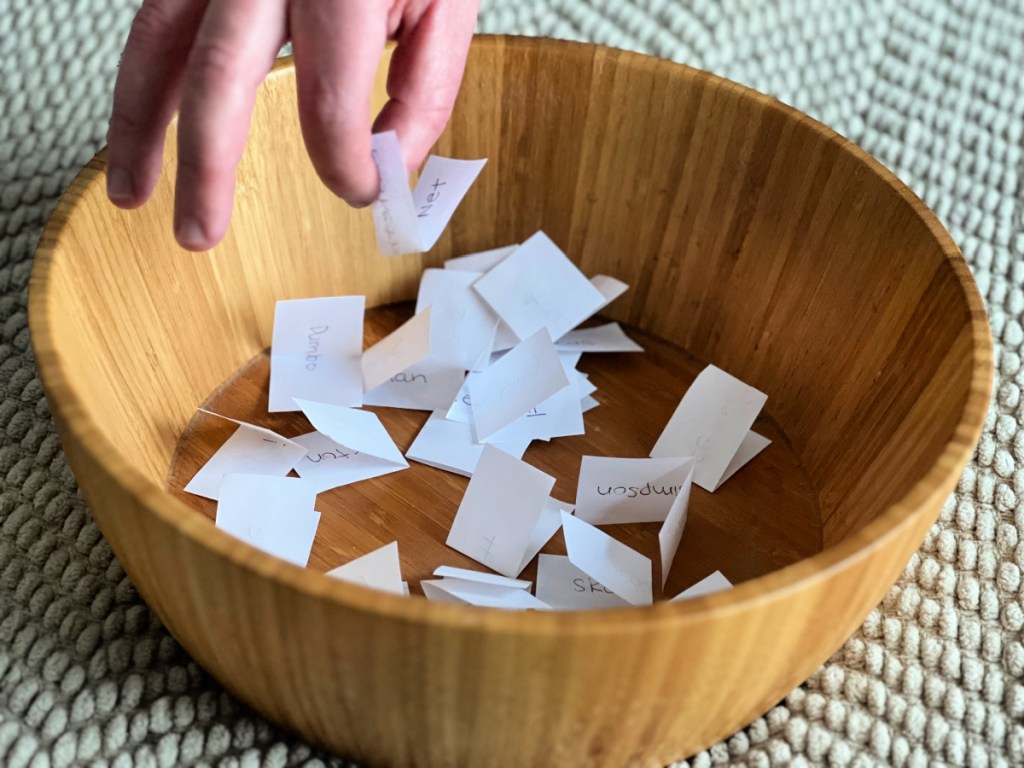 The object of the game: The team volunteer/player for each round has one objective and that is to quickly get their teammates to guess what is written on the slip of paper. If the team guesses correctly, the volunteer will grab another slip of paper and keep giving clues. Each team has 1 minute for their volunteer to get the team to guess as many secret words as possible.

How to score the game: Each team scores 1 point for each word they guess correctly. 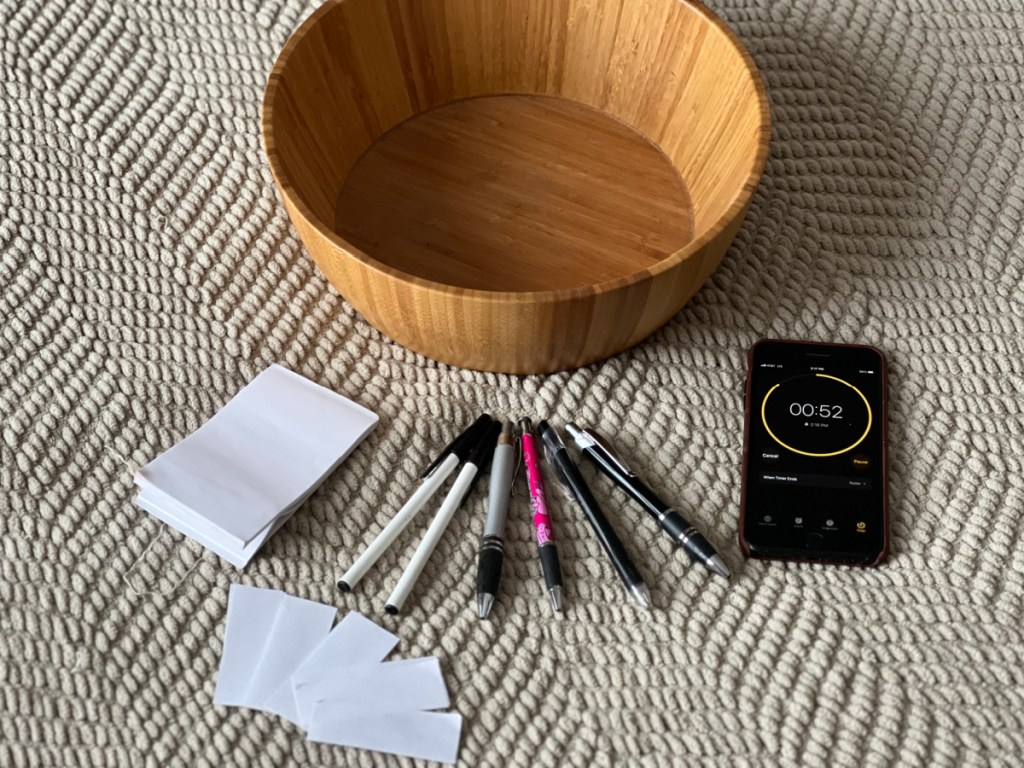 How to set up The Salad Bowl Game:

Setting up the Salad Bowl Game is easy-peasy. Here’s a list of what you need: 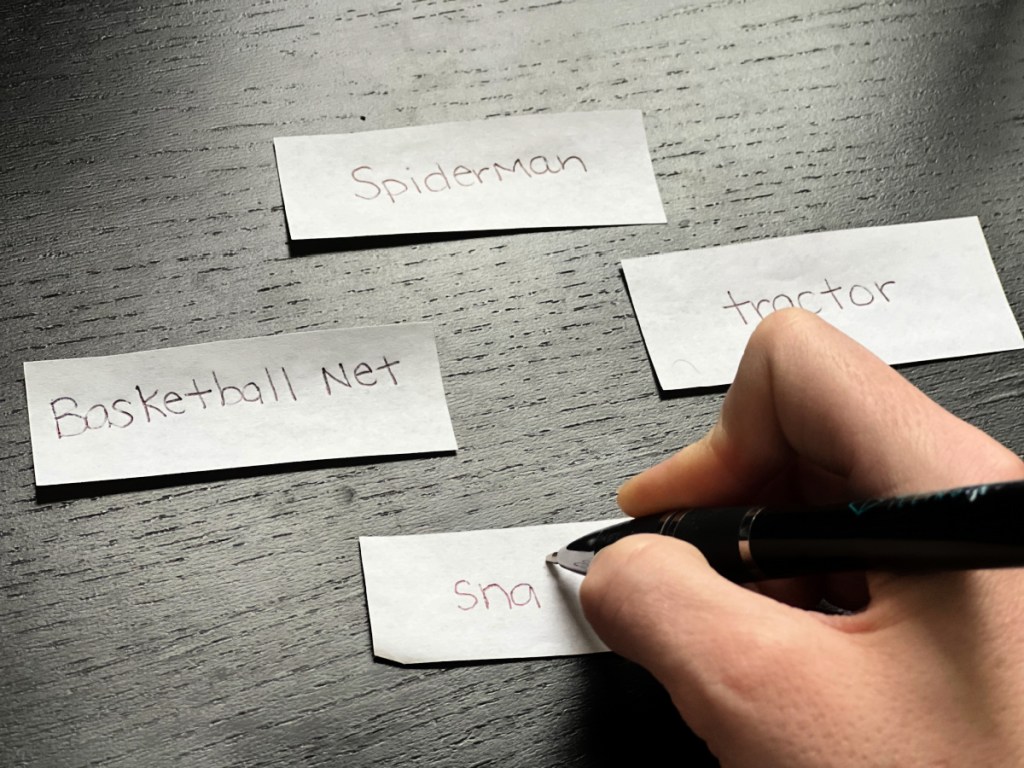 Once you have your supplies, give each player 4-6 slips of paper and a writing utensil. Have them secretly write down a person, place, or thing on each piece of paper. You can use movie titles, fictional characters, and celebrities, too!

Once done, have the players fold their slips of paper and toss them inside the salad bowl (if you don’t have a salad bowl, you can use a pot or any other large container). No peeking! 🙈 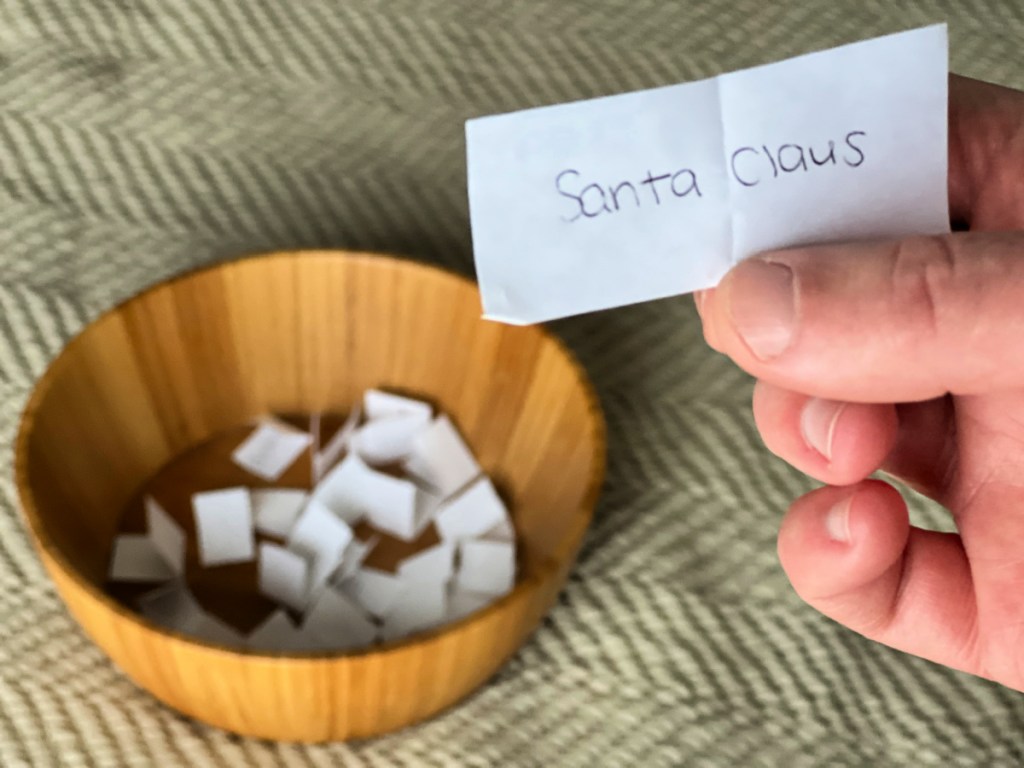 Ready to play? The Salad Bowl game is easy to learn and can be played with just 4 simple steps!

Divide the group into 2 teams with an equal number of players (larger groups may need to make 3 or 4 teams). Designate one player to also be a scorekeeper. 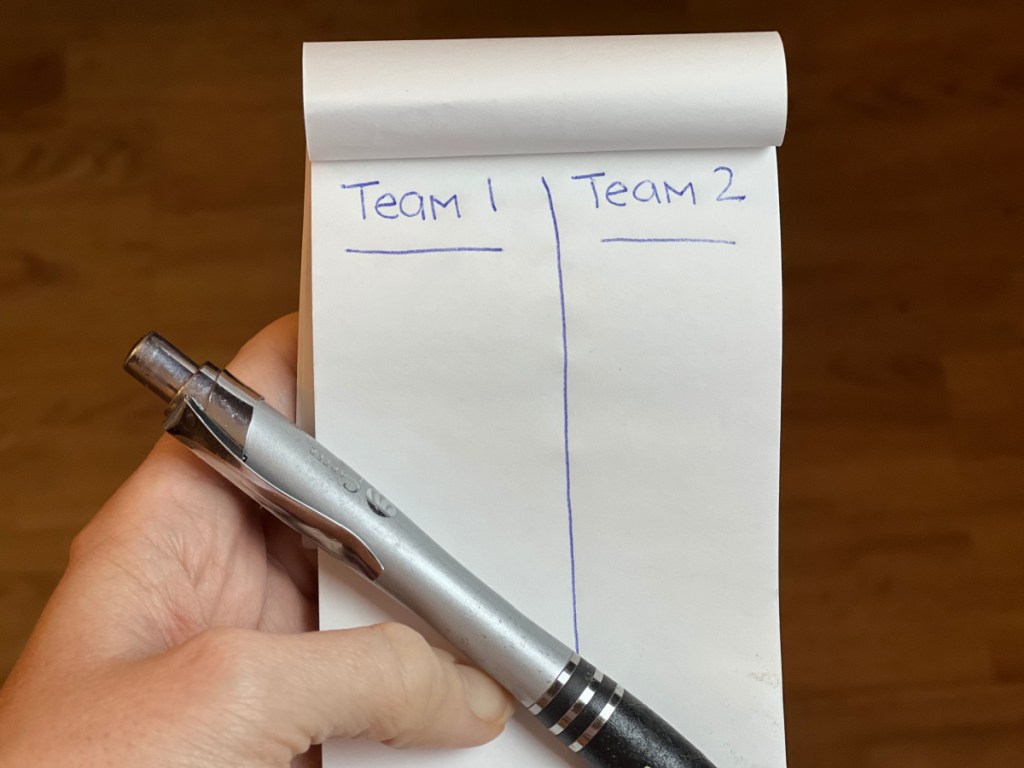 Have each team choose a volunteer for the first round, pick the team that will go first, and set the timer for 1 minute. 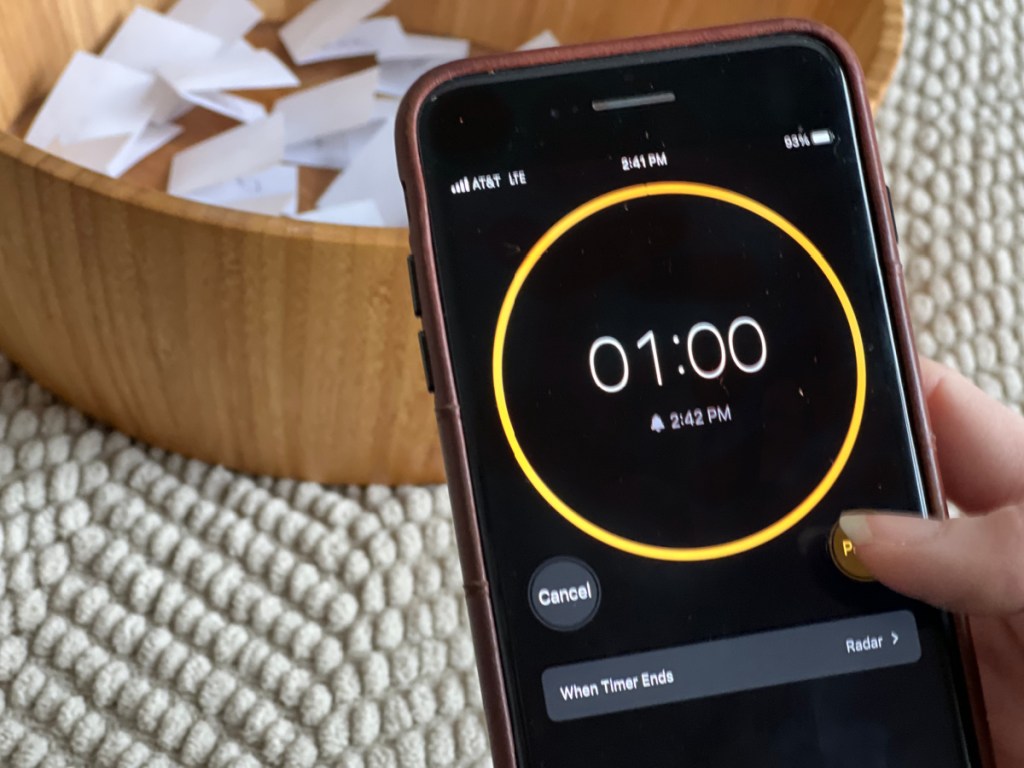 3. Start playing! There are three rounds with different guessing methods.

The first round is similar to the game Taboo. Start the timer and the first volunteer will pluck a slip of paper from the salad bowl and look at the secret word or words written on it. For this round, the volunteer can only give clues using words. There are no props or gestures allowed!

The player may give clues using any amount of words they would like. The catch? They cannot say any word (or part of any word) that appears on the slip of paper.  For example, if the slip of paper says, “skateboard” the player cannot say “skate,” “board,” or even “skater.” What they can say is, “Tony Hawk is famous for riding one of these.”

Once the time stops, the other team will have a chance to play the round. Once the round is finished, the scorekeeper will tally up the scores. Each team gets 1 point for each correct answer. 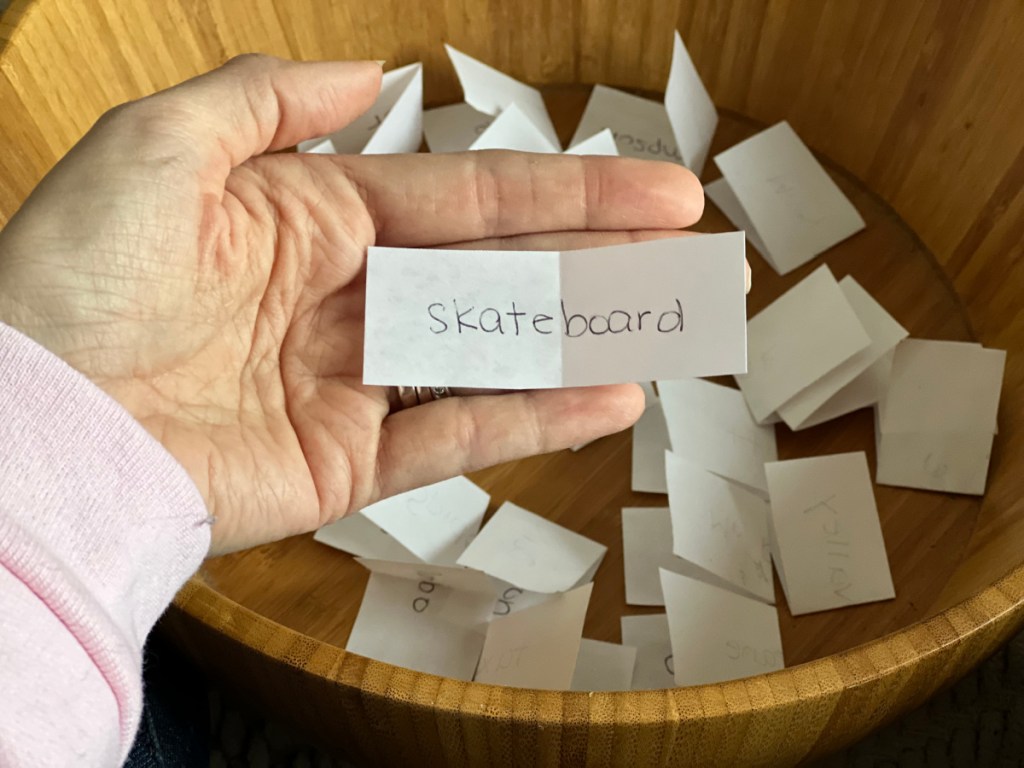 The second round is similar to the game charades and that means no talking! Have each team pick a new volunteer. Set the timer for a minute and let the first team’s volunteer begin. This player can use hand gestures but they cannot make words or say any sounds. 🤐 For example, if you get the word/movie title “Jaws,” you can’t hum the theme song, but you can pretend to have a dorsal fin.

Let each team take a turn and tally up the scores. 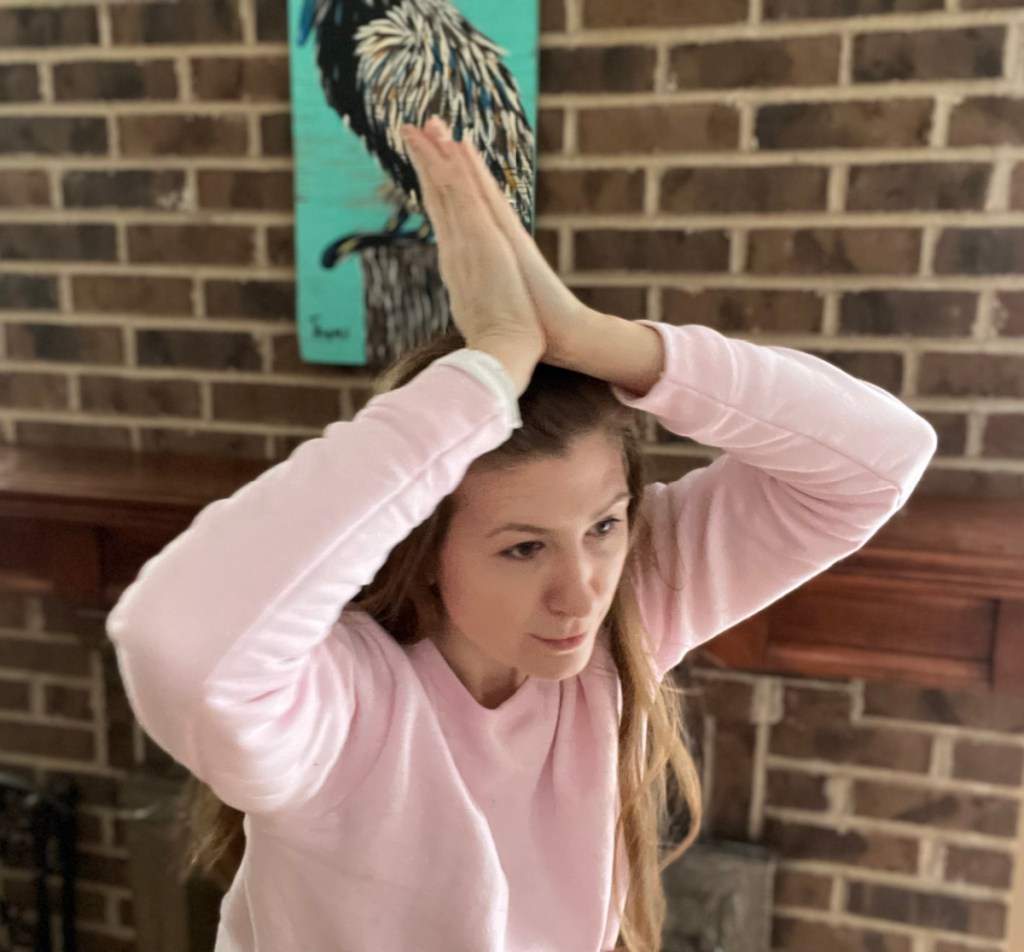 Have each team nominate a new volunteer for the final round. This round is similar to the first except that players must keep their clues to a single word only, so make it good! The word they say aloud must not appear on the slip of paper.

For example, if the slip of paper says, “basketball net,” the player could give a clue like “Shaq,” “Jordan,” or “dunk.” They are not allowed to say, “net,” or “b-ball.” If the team is unable to figure out the word, it is up to you to set the rules on whether they can skip and try a new secret word instead.

Let each team take a turn and tally up the scores. 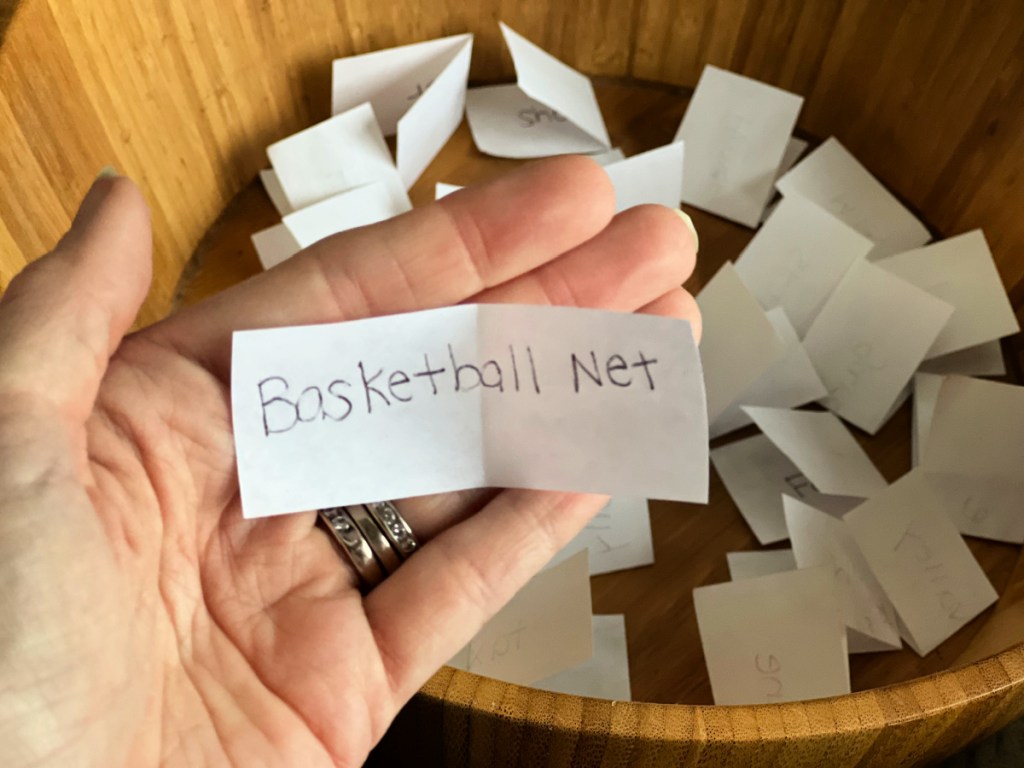 Add up the scores for each round. The team with the highest score wins the game! 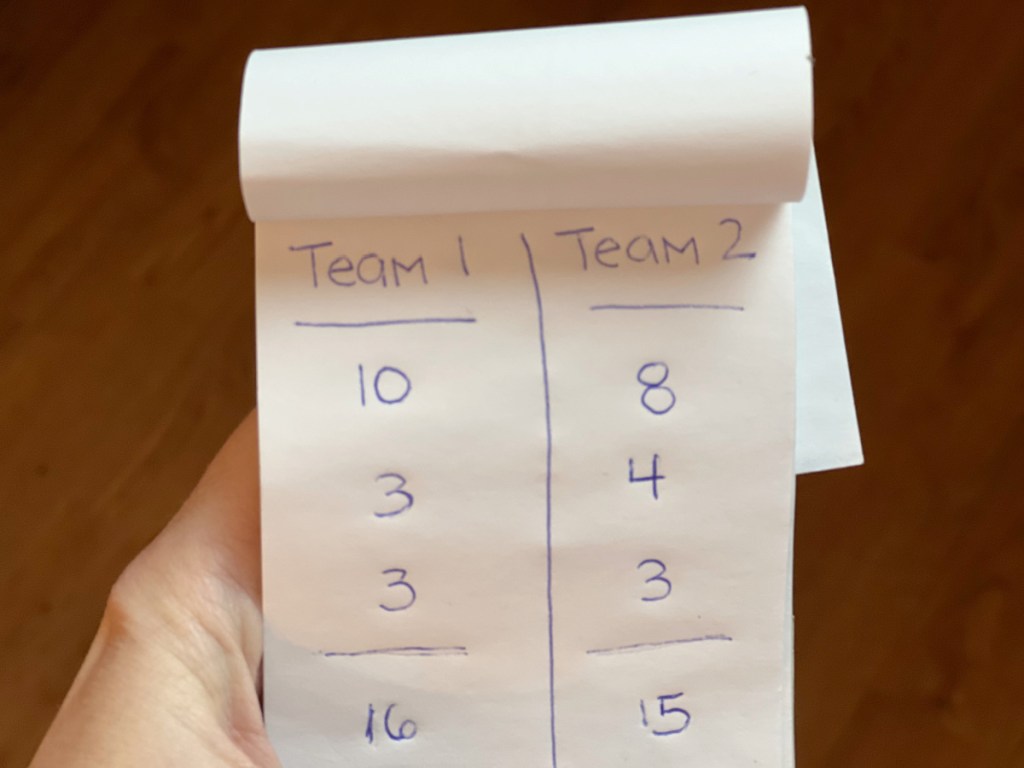 Who knew such a simple and FREE game could be so much fun?! 🙌 If you need a game for your next party, this is one to try!

“This game is so fun for a really large groups of people, which is awesome as lots of board games are usually up to 6 or 8 players. With this game, if you have a very large group for a Christmas gathering or New Year’s, you can play with everyone! I think what makes it so much fun is that it really works for all ages. The little kids can still understand and get laughs out of it as well as the teens and adults. It’s a really, really entertaining game that my entire family enjoyed – and that’s coming from teenagers who are usually hard to please!” – Collin, Hip2Save

Hosting a game night? See our list of the BEST classic board games that should be in every home!

Kara is a writer and photographer from the Midwest. Her creative work has appeared in various publications over the past decade. With a background in finance, she loves to be money-savvy. 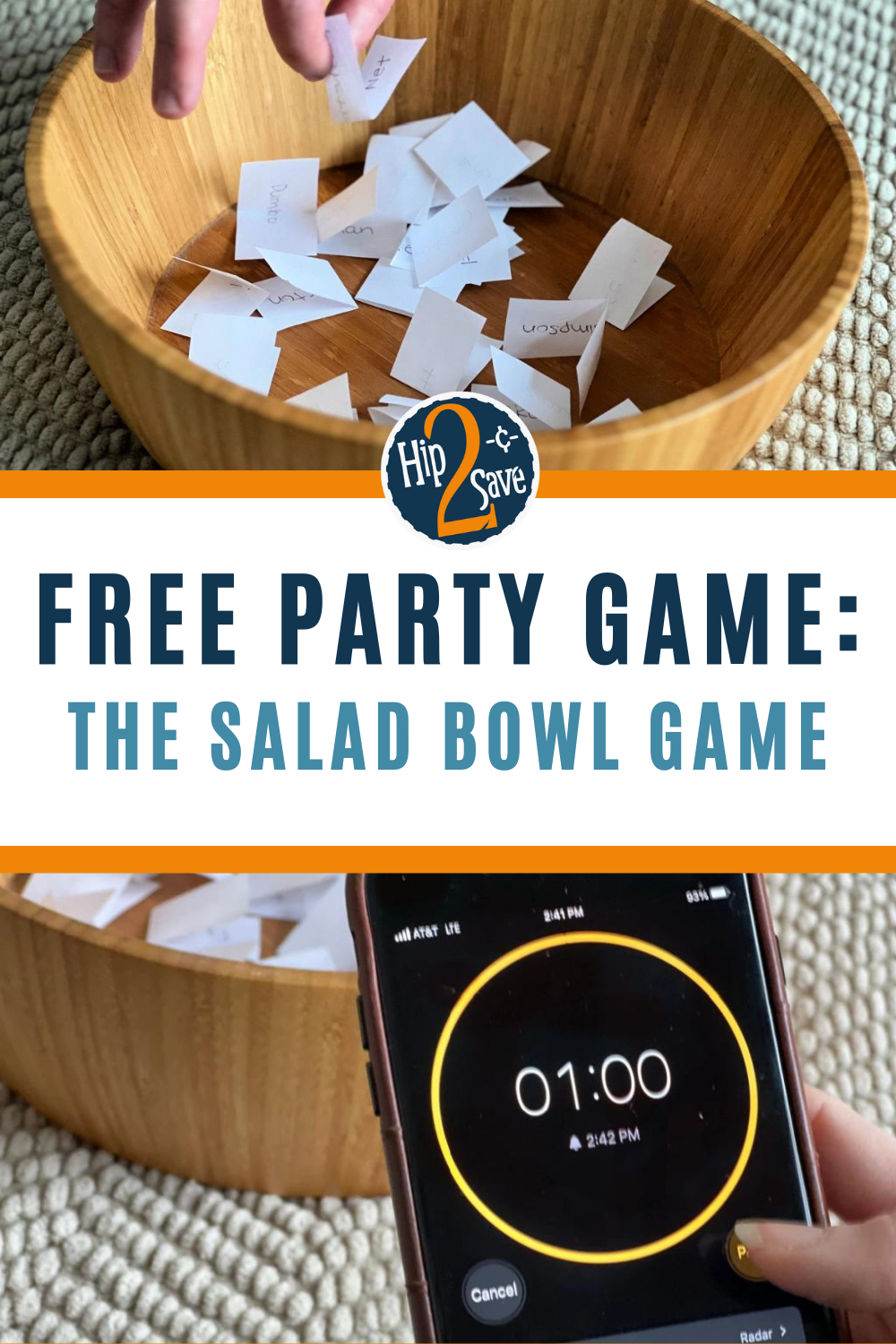