Passing out treats this year? According to the Hip team & readers, these are the worst ones to find in your Halloween candy bag… 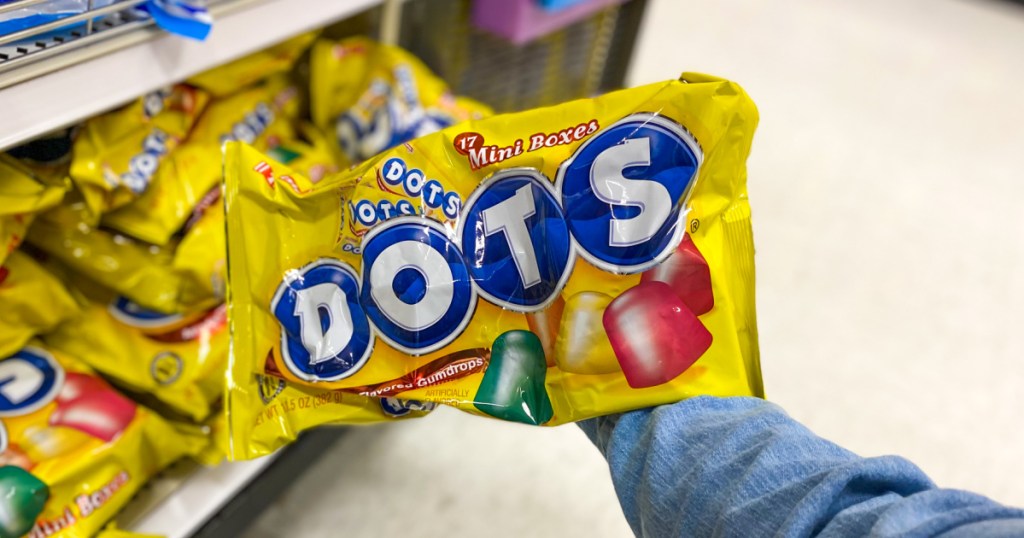 Do you have strong feelings about your (least) fave Halloween candies?

There are some things you should never discuss at the dinner table, including politics, religion, and–as we learned the other day here at Hip–your views on the worst Halloween candy.

A simple question about our favorite and least favorite Halloween candies sparked an unexpected debate. We learned that some candies are universally loved, some are universally dreaded, and others exist in some type of sugary limbo between the two extremes. 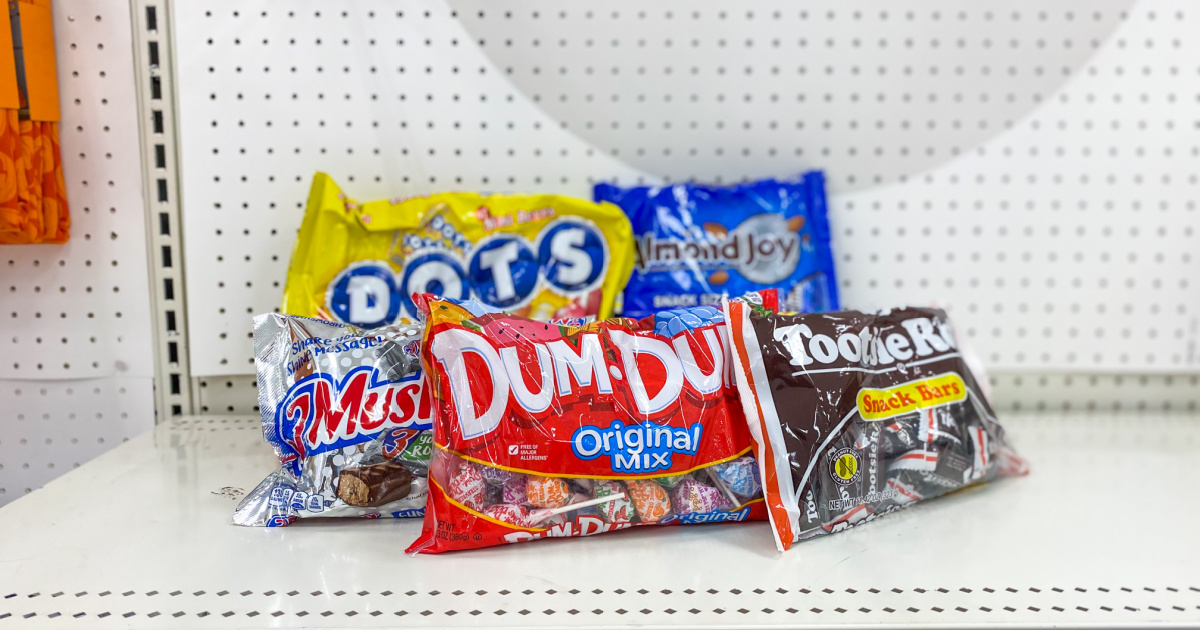 After much discussion between our Hip team and readers, we’ve compiled this list of the worst, least-tasty, & most disappointing Halloween candies that hopefully won’t be landing in your candy bowl this year.

By the way, check out this post to see our picks for the best Halloween candy.

Note: This list is totally not meant to be taken seriously, so don’t worry if some of your faves make their appearances. Think about the bright side–there’s more for you! 🤗 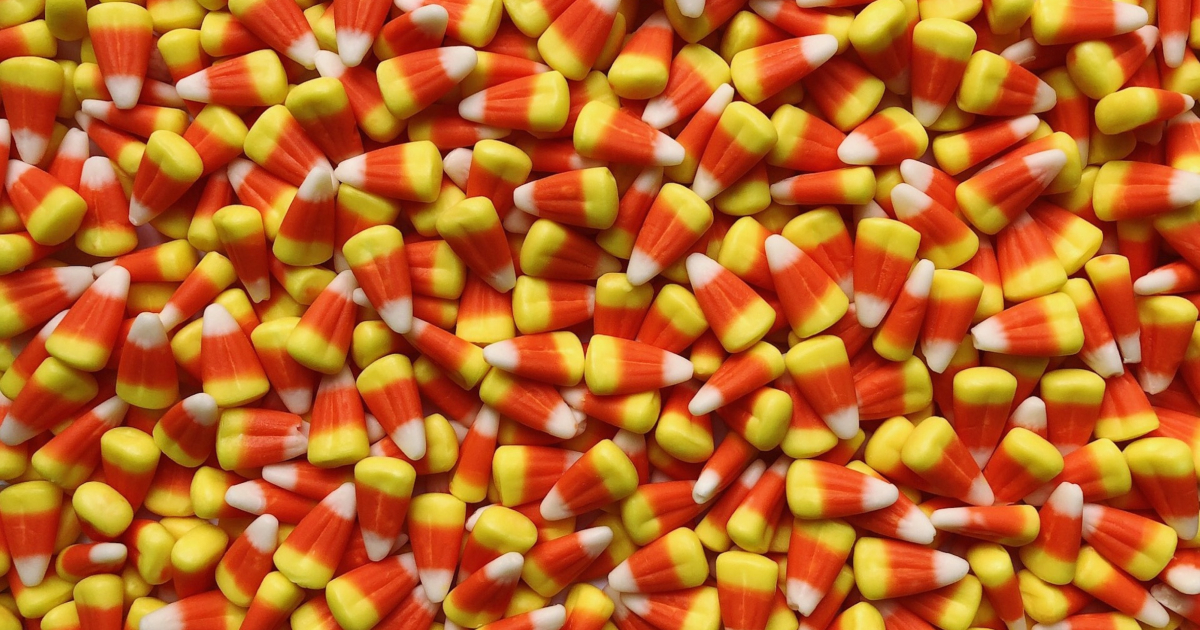 Starting this list out strong is one of the most divisive Halloween candies of all time. But really, what is there to like?

Between the weird, waxy texture to the corn-syrup-flavored interior, it’s not exactly clear how these became such an iconic Halloween “treat” when there are so many better options. During our hot debate, my Hip teammate, Shane, led the anti-candy-corn rally based on negative childhood memories alone. But he’s definitely not the only one who can’t stand the taste.

Psssst! Full disclosure, I (and many others) actually love candy corn, which is why it’s also included in our best Halloween candy list. 😉

Even if you don’t like candy corn, my Hip teammate, Emily, recommends trying it with cashews. I hadn’t thought of that, but it sounds delicious! And it’s also a mandatory addition to our Halloween Charcuterie Board. 😁

2. Turns out I’m not the only one who hates Tootsie Rolls. 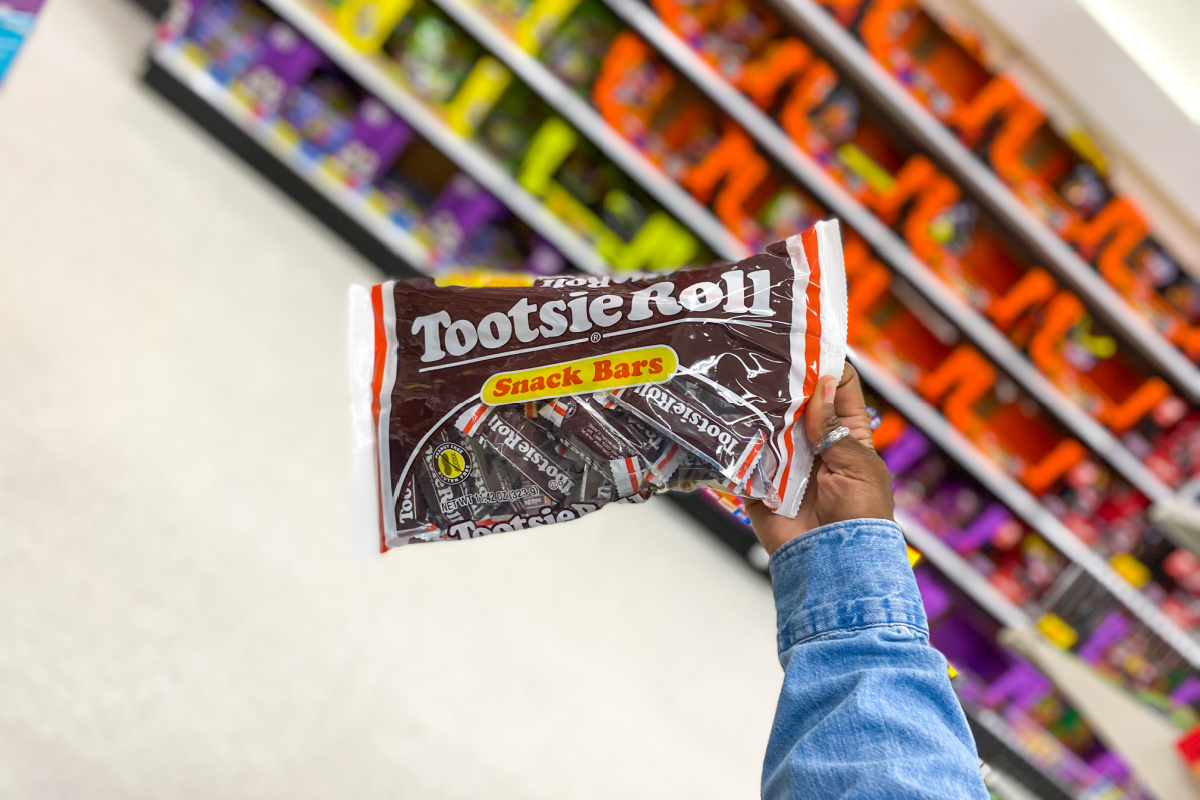 I know, I know, “hate” is a strong word and not one I use often.

But when it comes to Tootsie Rolls, there’s no better word to describe my distaste for them. And I’m not alone! All of my Hip teammates feel the same about the chocolate-inspired candies (I say “inspired” because they most definitely do not taste like my beloved chocolate).

Rumor has it that the fruit-flavored Tootsie Rolls are actually pretty good, but many of us are too grossed out by the original to even try them.

3. Good & Plenty black licorice candy has only one fan on the Hip team!

Have you ever gotten black licorice or Good & Plenty candies while trick-or-treating?

If not, congratulations–it means the people in your neighborhood like you. 🤣

In the defense of anything black licorice-flavored, it has a super strong & distinct taste that you either love or hate…it’s just an unfortunate reality that no one loves it, except for my Hip teammate, Jenna. At least the poor candy has one person in its corner. 🙌

4. We all agreed that Peanut Butter Kisses are one of the worst Halloween candy options ever. 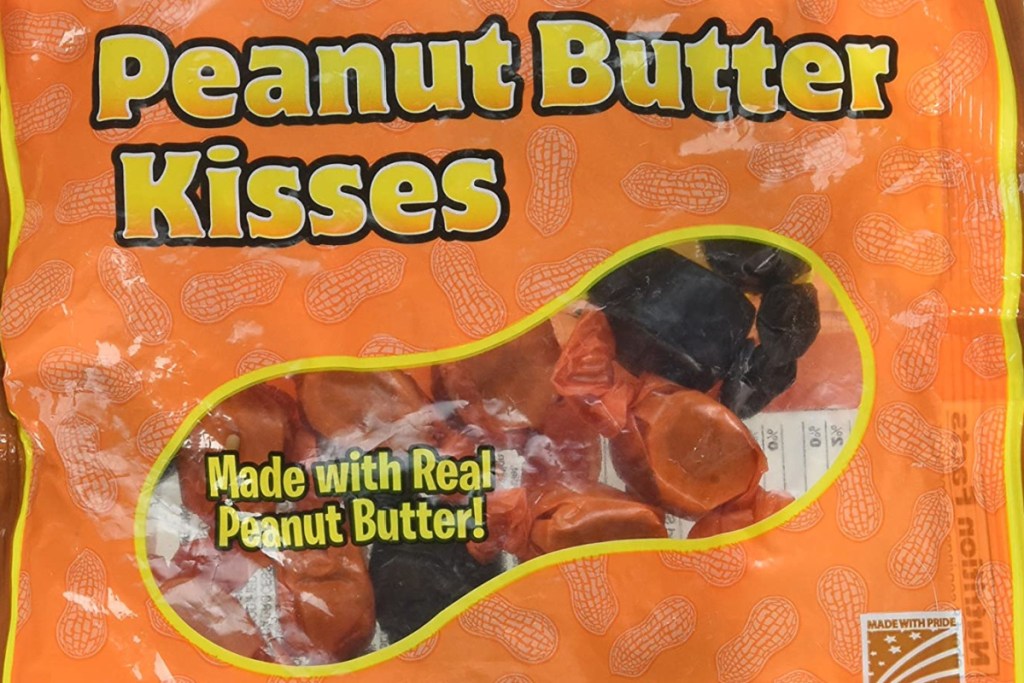 My Hip teammate Liza described Peanut Butter Kisses as “weird PB taffy chew things staring sadly up at you from the bottom of the bag, feeling bad that they’re not literally anything else.”

I also believe these are what our Hip reader, Tessa, was talking about when she wrote that “the worst Halloween candy is whatever is wrapped in that orange and black paper. I think it might be some kind of peanut butter flavored candy, but I can’t keep it in my mouth long enough to know for sure.” We totally get you, Tessa. 😉

Although Liza’s description makes me want to eat these out of pity, I just don’t think I’d be able to hack that weird texture and, quite frankly, upsetting flavor. Whoever insulted my beloved peanut butter like that has some explainin’ to do.

5. We definitely won’t be enjoying any Bit-o-Honeys or Mary Janes this year. 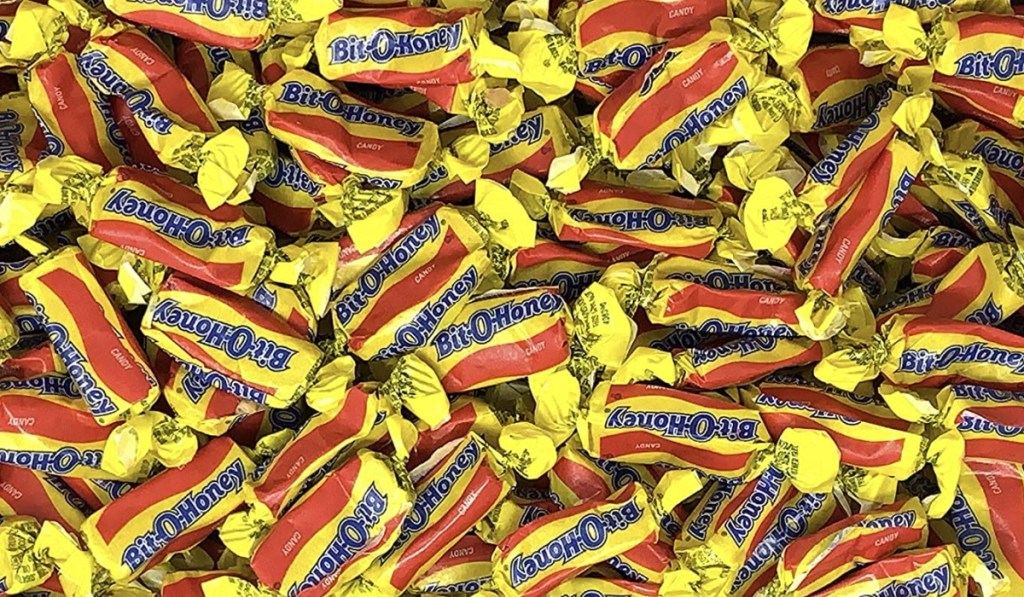 These candies are similar enough that if you don’t like one, you probably won’t like the other.

Honey and almond seems like such a good combo, but in the case of Bit-o-Honeys, well…it just isn’t. And Mary Jane’s peanut butter-and-molasses flavor is equally disappointing.

If you’ve never had them, they both sort of taste like sugary nothingness with a tiny hint of salt. And they get stuck in your teeth, so it’s a lose-lose situation.

6. There are people out there who don’t like Almond Joys… 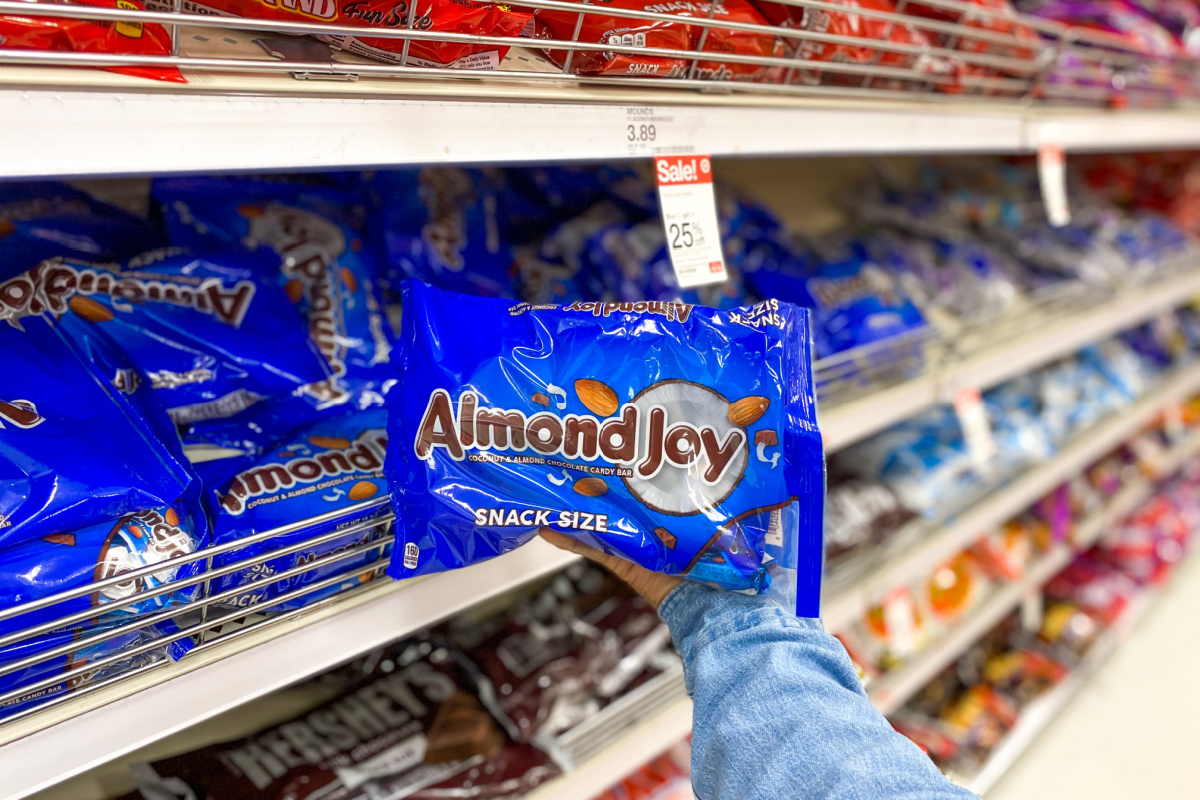 It pains me to put my beloved Almond Joys on the “worst candy list,” but as I mentioned earlier, I have to look on the bright side–at least there’s more for me!

While some of my Hip teammates also like Almond Joys, we were far outnumbered by the haters, and it looks like they’re pretty unpopular with the kiddos as well. These also got a big thumbs down from our readers. Maybe it’s the texture of the coconut? 🤔 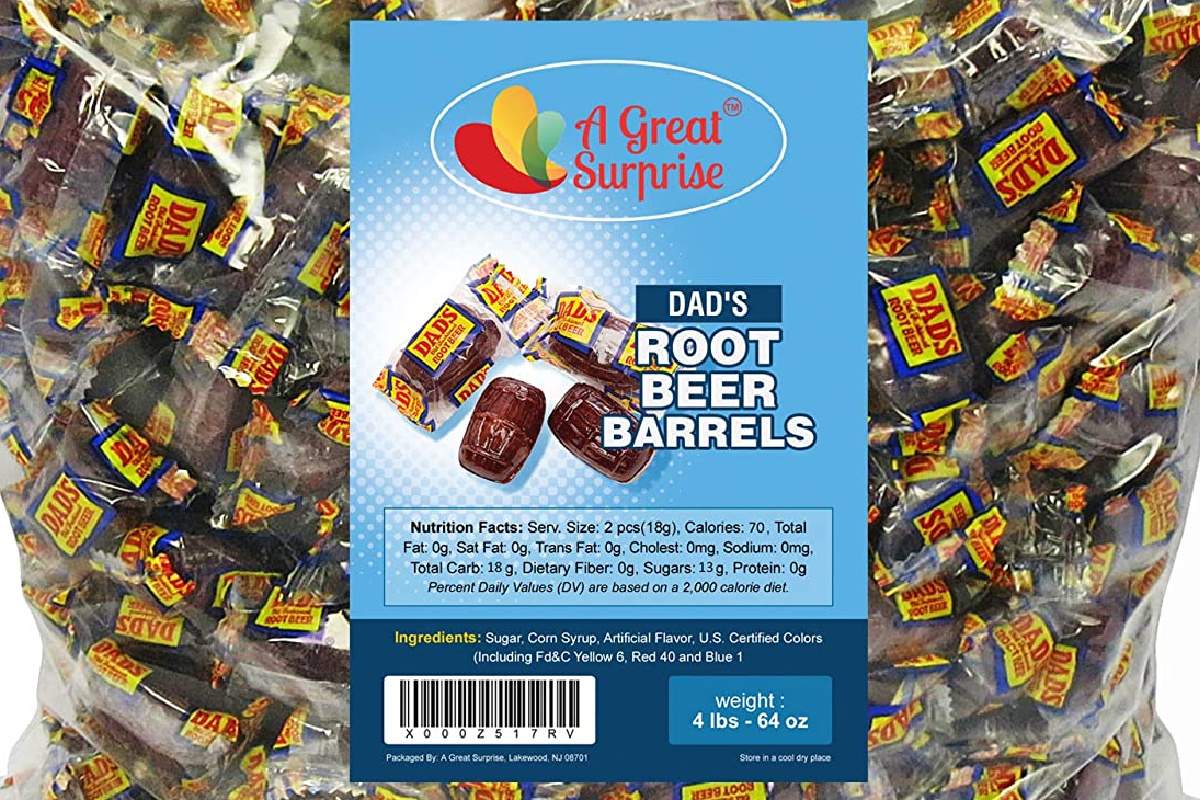 Root Beer is great by itself, but it seems like that flavor doesn’t translate well to candy. When I got the Root Beer Barrels while trick-or-treating as a kid, I’d end up throwing them away because no one wanted them. While they’re not particularly offensive like the Peanut Butter Kisses, they’re definitely unpleasant, which lands them on our worst candy list.

8. We love chocolate bars… as long as they’re not 3 Musketeers. 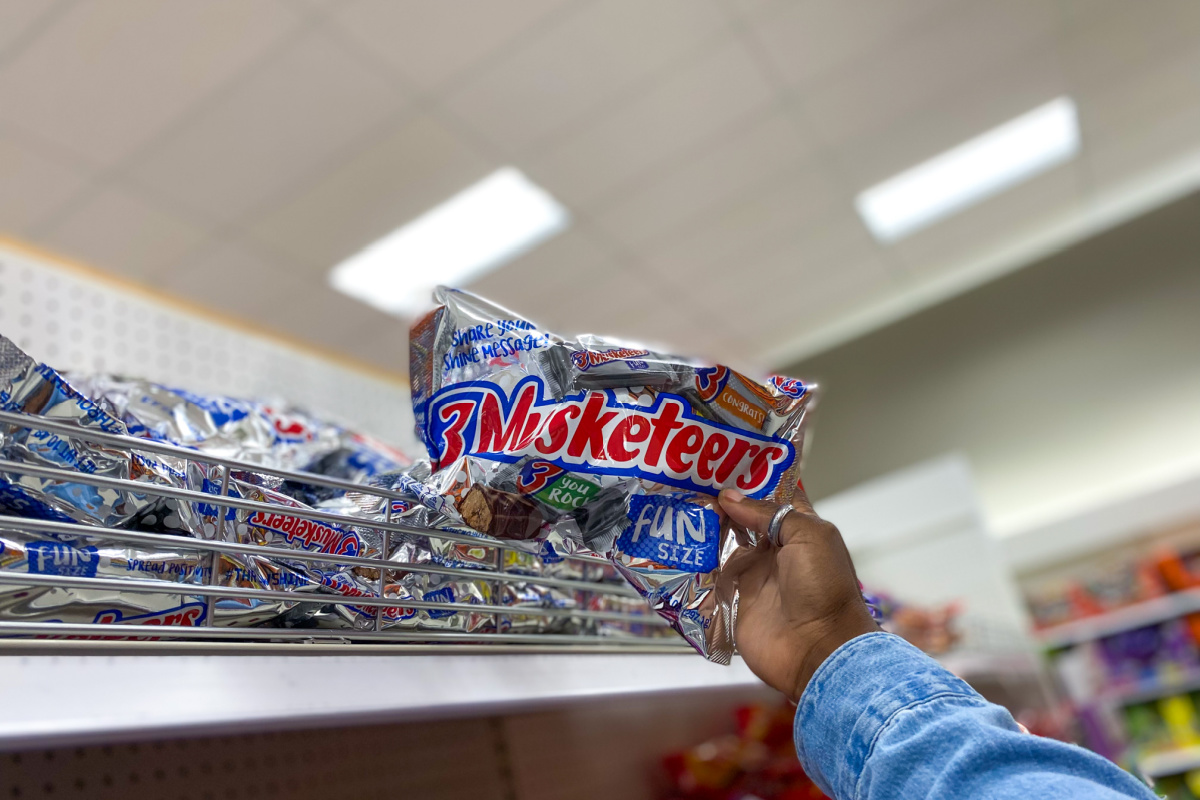 The general consensus between both the Hip team and readers is that we’re always excited to see chocolate in our (or our kiddos’ 🤣) Halloween candy haul, unless it’s a 3 Musketeers.

This candy bar just doesn’t have much going for it. To be fair, it has to compete with fan-favorite Snickers, Kit-Kats, and Reese’s Pumpkins, which my Hip teammate, Emily, referred to as the “gold standard of candy.” So sadly, this candy bar just didn’t stand a chance against its delicious counterparts.

9. Dum Dum lollipops don’t have any fans among our Hip readers. 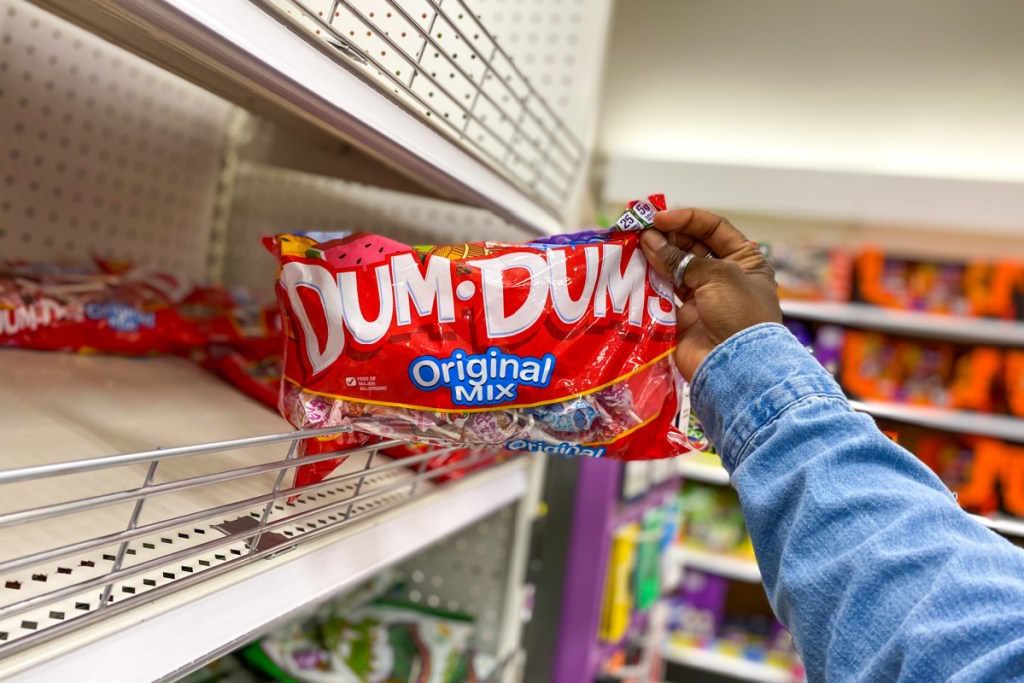 Although I liked the Blue Raspberry Dum Dums when I was growing up, the other flavors were always left to melt in the bottom of my candy bag. 😅 They’re messy and probably way more trouble than they’re worth. We’ll definitely be saving our tastebuds for other, more crave-worthy candies this year.

10. Dots may look like they would taste good, but we all know better. 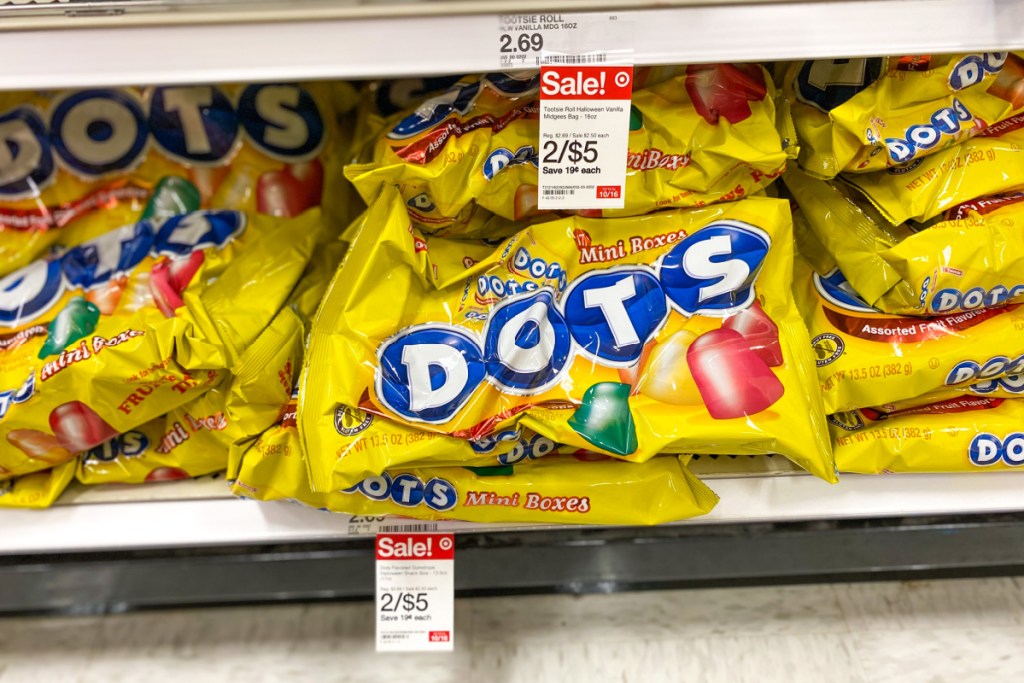 From the outside, you may expect a delicious gummy texture and tangy flavor from Dots. But, tragically, those expectations will be crushed once you get a taste of them.

They’re basically all sugar with no real flavor, and I’m convinced that these were made specifically to get stuck on the sides of our teeth. We can also include Jujubes and Jujyfruits on this list since they’re basically just Dots in disguise. 🧐 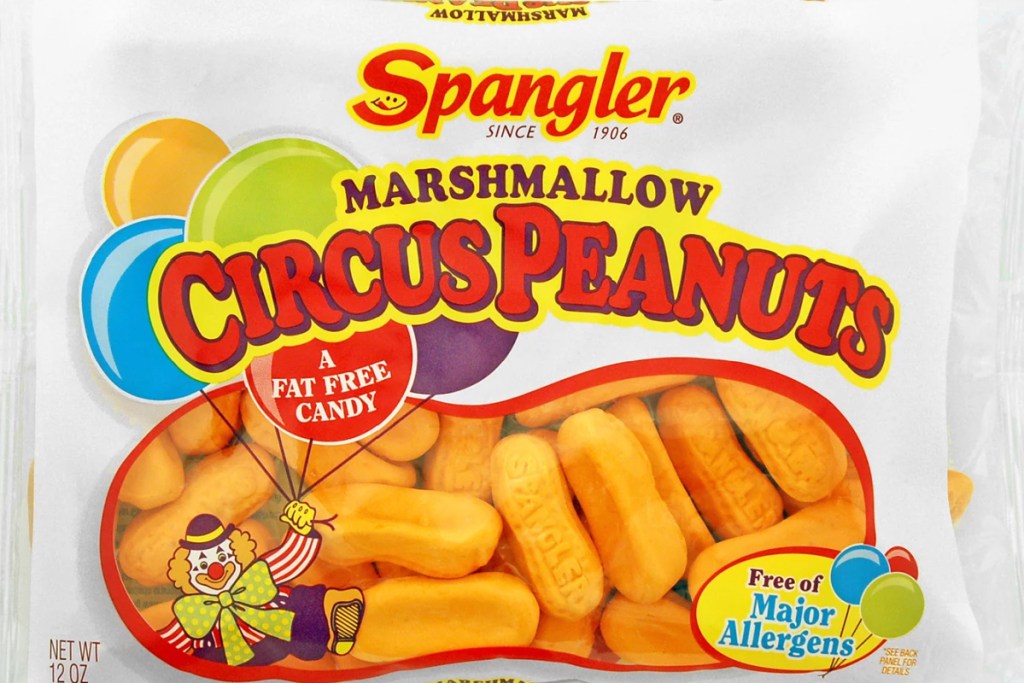 I have a confession: I’ve never actually eaten a single Circus Peanut in my whole life. But several Hip readers mentioned how awful these were, so I had to consult Google and see what the fuss was about.

I searched for “what do Circus Peanuts taste like,” and I really think this first description (courtesy of the Wall Street Journal) told me everything I need to know:

“Though several companies make them, circus peanuts contain essentially the same ingredients: corn syrup, sugar, gelatin and artificial flavor and color. All taste like bananas to one degree or another and are orange and foamy.”

“Orange, foamy corn syrup” doesn’t sound like anything I’d want to put in my mouth, so I definitely won’t be trying Circus Peanuts this year…or any other year, really.

12. You can safely nix all hard candies from your handouts this year. 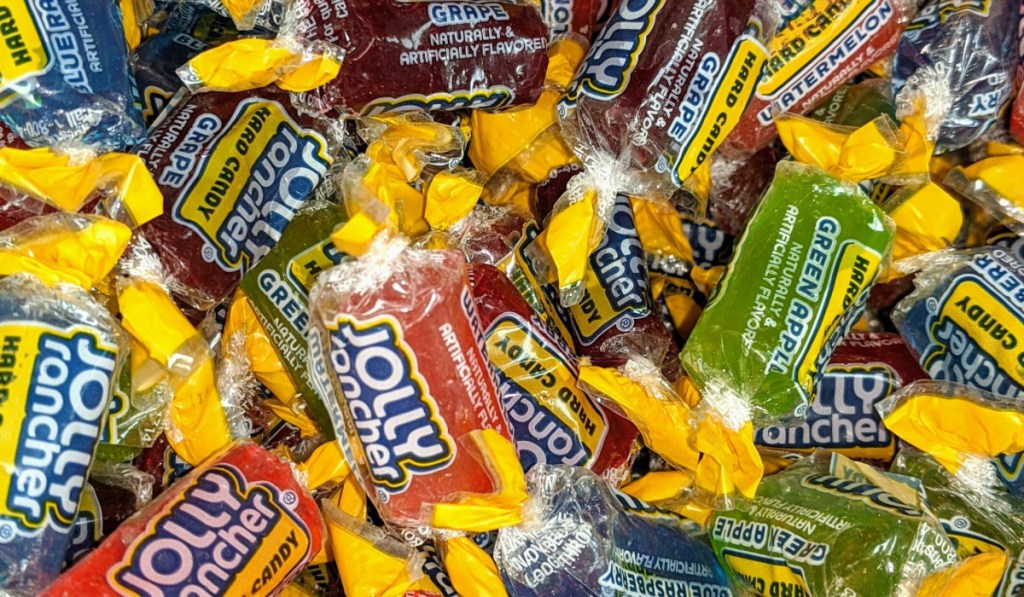 According to Hip readers, most hard candies are a no-go.

Whether it’s because they melt too easily (Jolly Ranchers), they’re too difficult to eat (ahem, Jawbreakers…just why?), or the flavors are a little too old-fashioned (we’re lookin’ at you, Root Beer Barrels), it’s best to breeze past these picks in the candy aisle and go straight for the good stuff. 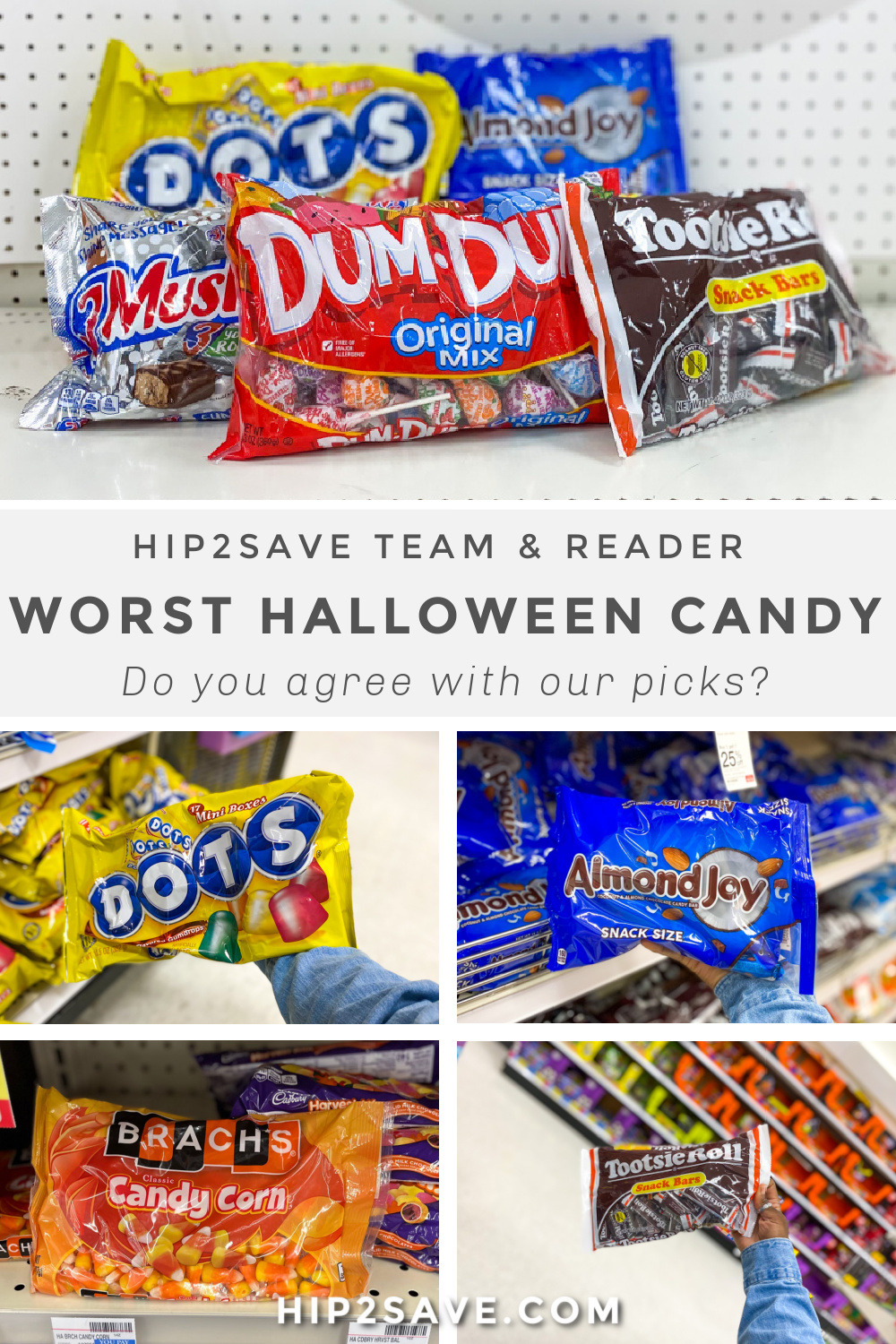