Remember the Million Dollar Chicken Recipe Oprah Hated? I Made It… But With Improvements! 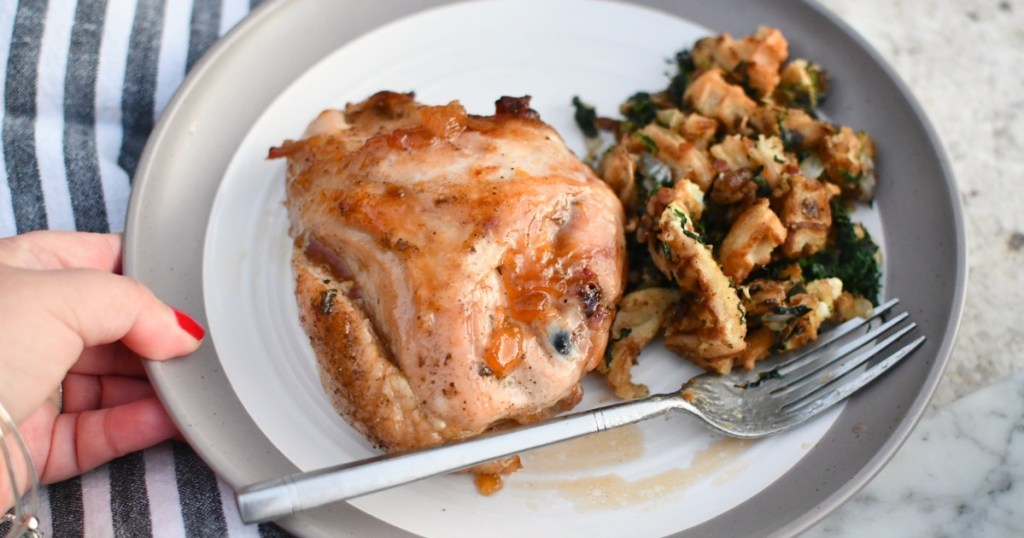 Ready to get nostalgic with me?

A few days ago I came across footage of an old segment of the Oprah show from 2006 where she tasted a meal called Million Dollar Chicken. Oprah had an on-air epic reaction! Her face is hysterical as she tastes some of the stuffing that didn’t have any salt or pepper, and was trying to be polite.

Oh how I miss watching The Oprah Show – anyone else?! 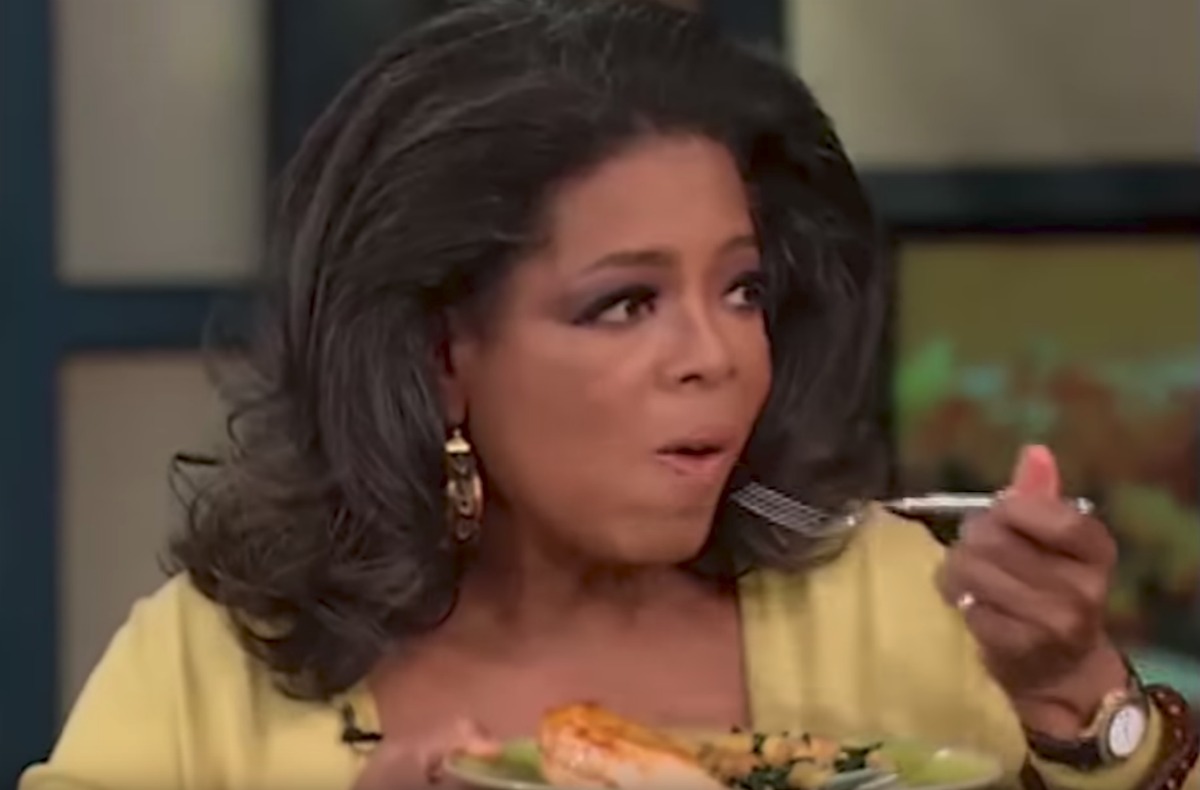 It turned out this Baked Chicken & Spinach Stuffing recipe was created by Anna Ginsberg, for a Pillsbury recipe contest and she was the winner of the grand prize of 1 million dollars! She came on the show to demo her recipe, and Oprah’s taste test was pretty funny! If you watch the clip, she was actually maybe not loving the unseasoned stuffing but did say the chicken was excellent.

I was curious to check out the recipe for this “Million Dollar Chicken”, which can be still be found on Pillsbury.com, and decided to give it a go for myself! 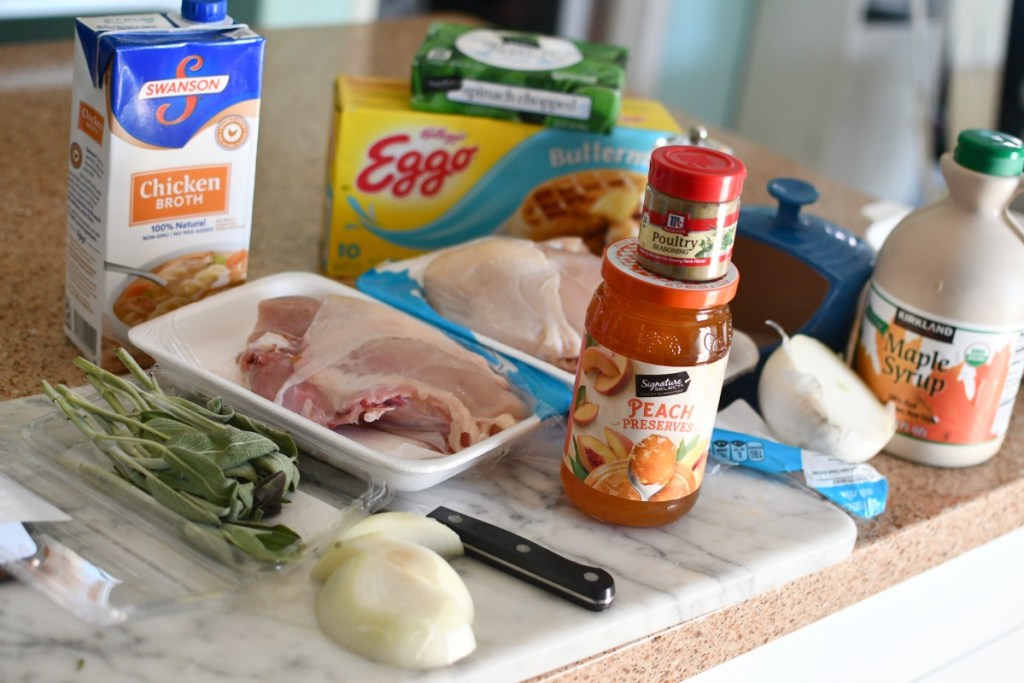 The sweet and savory baked chicken seemed like a super easy and interesting 3 ingredient flavor mix of peach preserves, Worcestershire sauce, and maple syrup. I was also intrigued by the idea of creating stuffing using toasted frozen waffles as the main ingredient, which is kind of genius! 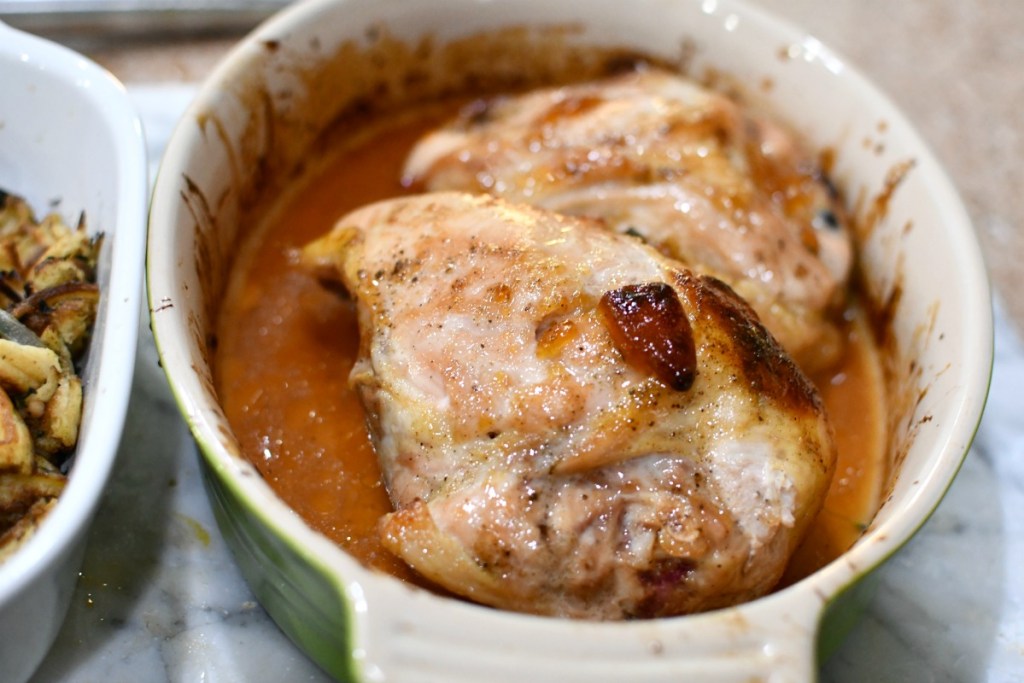 The chicken is an extremely easy process of mixing up the apricot chicken sauce, pouring it over the chicken breasts, and roasting them in the oven for about 45 minutes. It comes out nicely glazed and browned. I’m thinking for next time I may try using this recipe and method, but using chicken thighs instead as we love the richer dark meat. 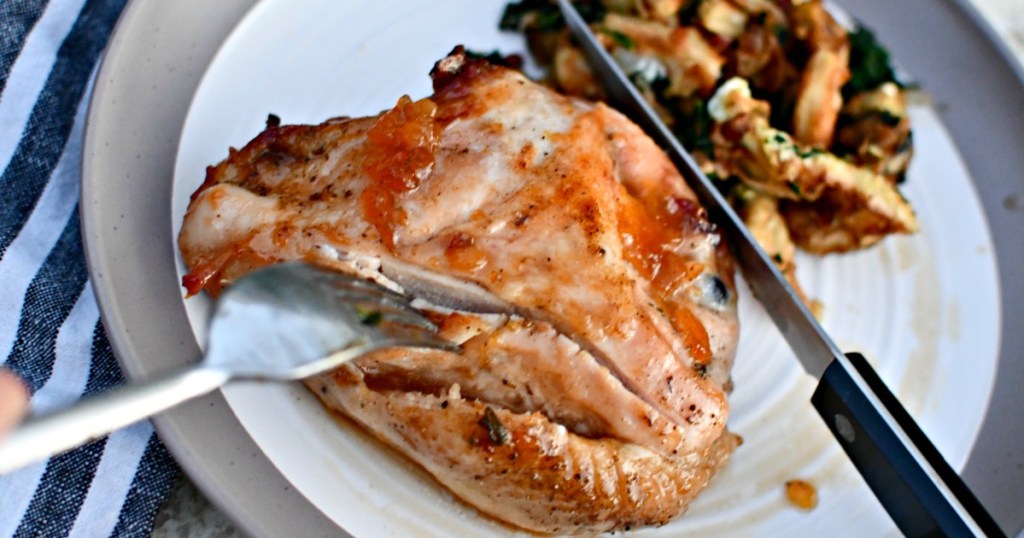 I used bone-in chicken breasts with the skin on like the recipe says and it came out moist on the inside and caramelized around the outside. My kids particularly liked this sweet and savory sauce it makes. 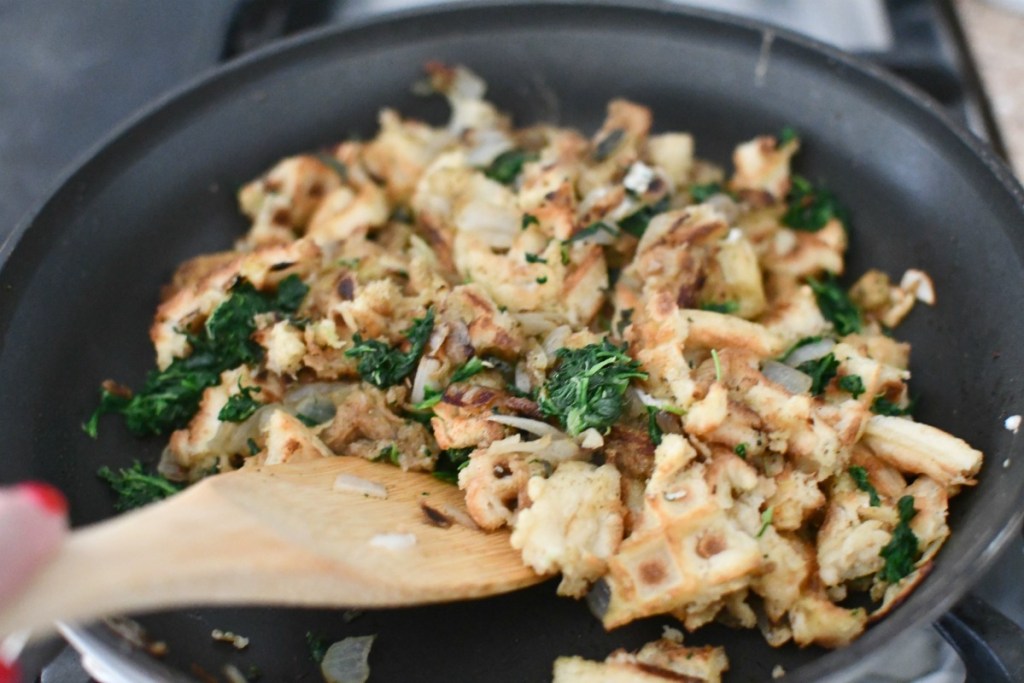 Now for the stuffing. So after reading the comments, I adjusted some things to suit our taste and believe it came out better than the original variation. I used a couple more waffles than it stated, twice as much butter, more fresh sage, and seasoned the onion mixture with salt and pepper. I also used a little less spinach then listed because I know my family isn’t a fan. Overall it was tasty- and I loved the pecans on top!

That’s the beauty of written recipes, I believe. You can always just use them as a guide and adjust to taste for your family! 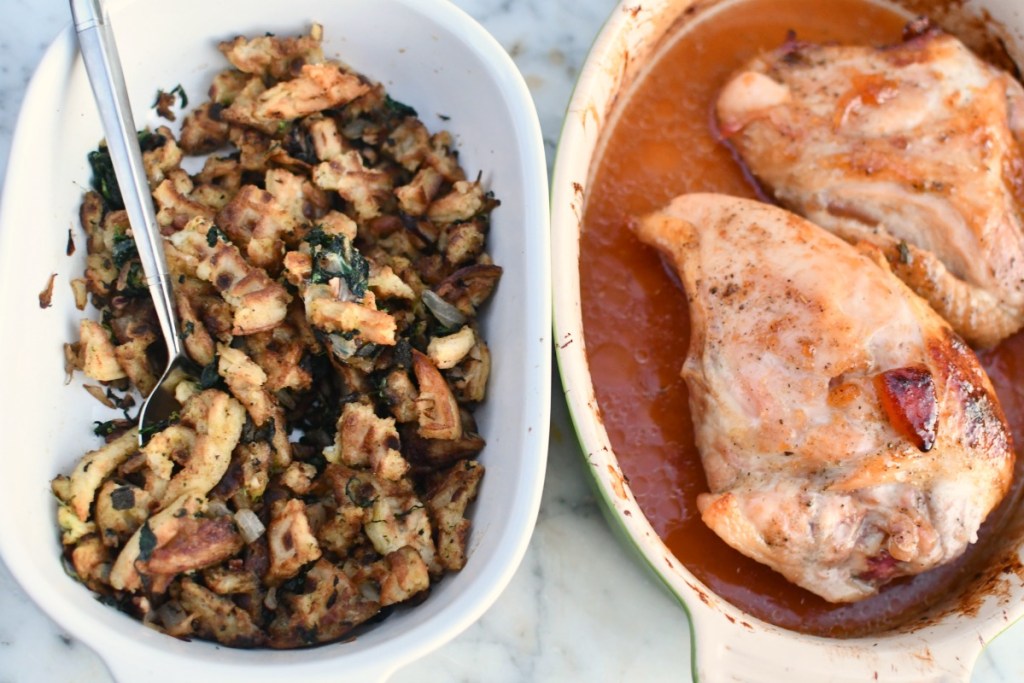 Overall, with the changes I made, this was a pretty solid meal my family enjoyed!

I’ll definitely be using the “Million Dollar Chicken” recipe again. However next time, I may skip the stuffing and serve the chicken with rice and steamed veggies to make things even easier.

Let me know if you give this recipe a try!

See how I meal prep like a pro using this book! 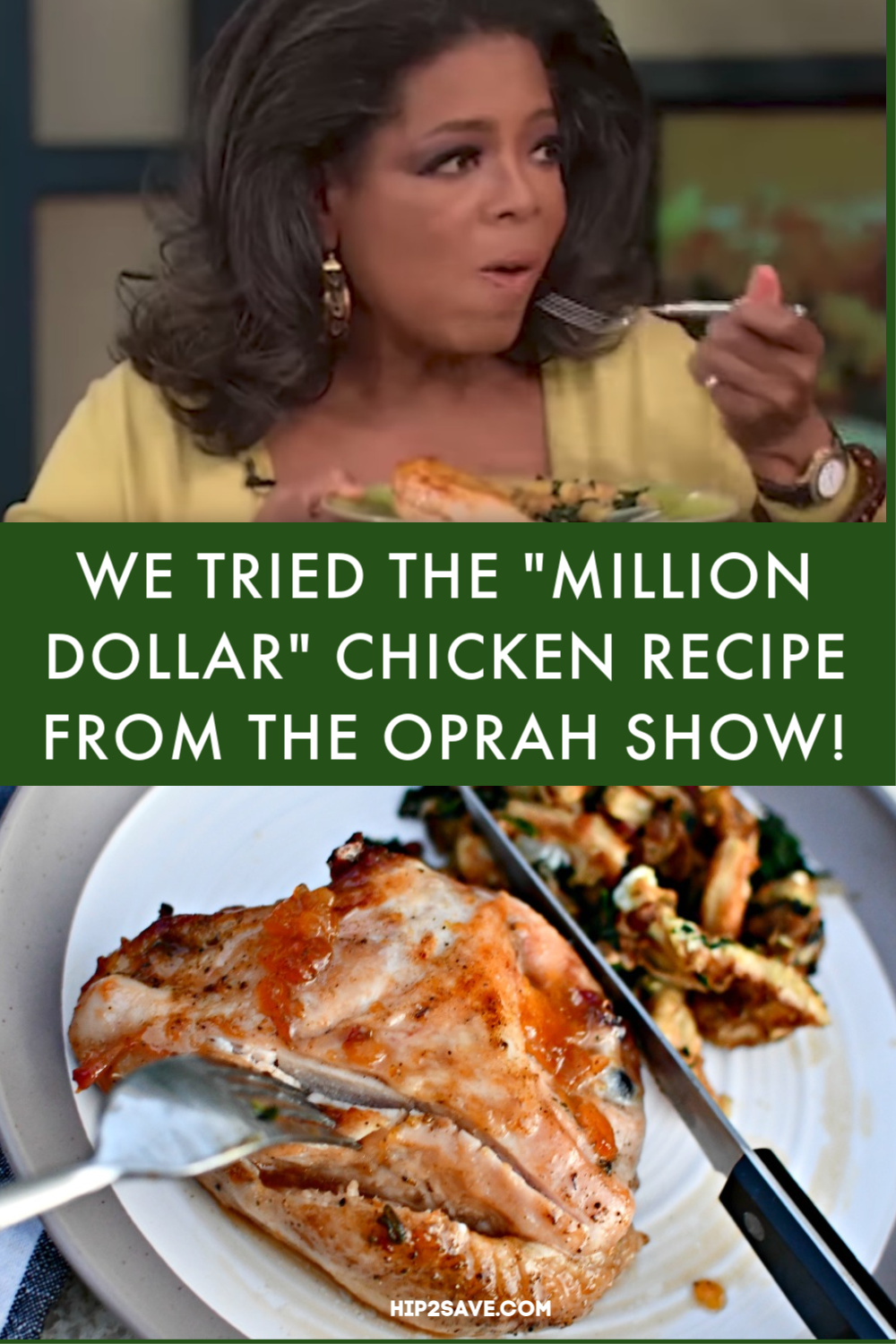