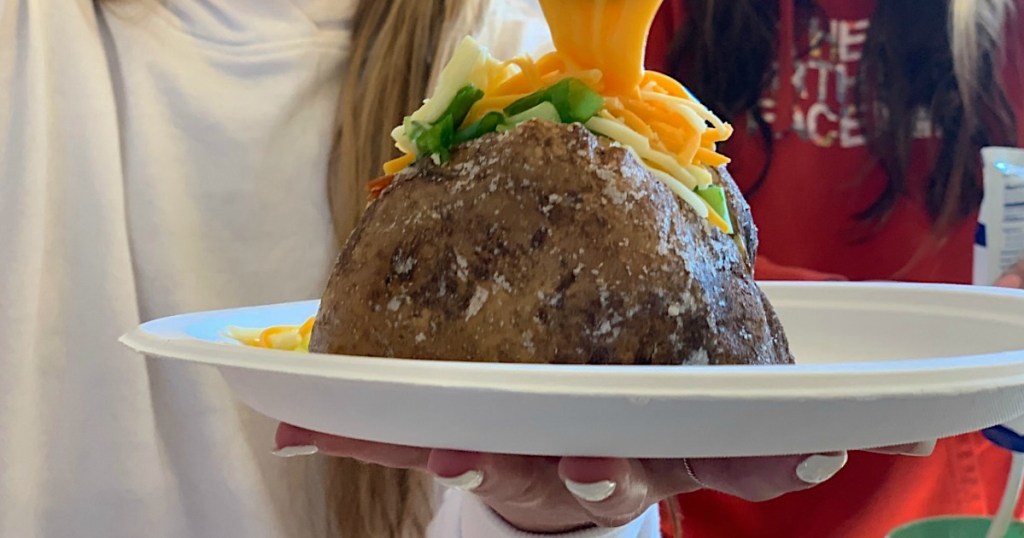 Good food and parties go together like baked potatoes and toppings!

Let’s face it, coming up with meal ideas when hosting a party or feeding a crowd can get tricky when you’ve got different dietary restrictions to think about, picky eaters to accommodate, and figuring out an idea that doesn’t require a lot of prep or clean-up.

Well… if you enjoy baked potatoes as much as we do, you’re going to love this fun baked potato bar idea for your next get together or party! It’s a winner!

Potato bar to the rescue!

Here’s what Collin had to say about this idea:

“Over the summer, I was trying to come up with a fun idea for feeding a large group of hungry yet picky teenagers. After doing some browsing online for inspiration, I decided on a potato bar! I loved this idea because it didn’t seem too difficult or too expensive – just bake a bunch of potatoes and then decide on toppings. And I also thought it was great since the variety of toppings available would appeal to many different taste buds and dietary restrictions.

And guess what? It turned out to be a total success! 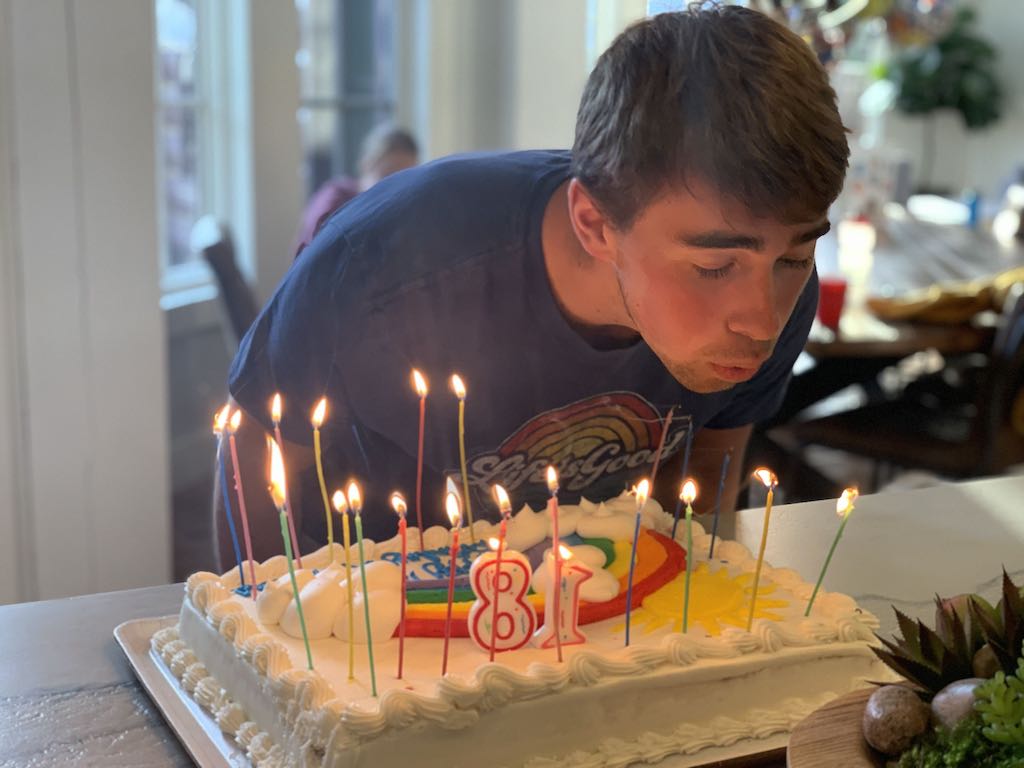 We celebrated my son, Nick’s, 18th birthday (yes 18!! 😢) in July, and all of the teens were so excited about the potato bar! It was nice to see everyone enjoying their meal, especially considering the size of the group.

Oh and if you need a dessert idea for a large group that’s super easy, we love Costco cake! It’s so good, so affordable, and so BIG! The only downside, I can’t resist Costco cake, and I am a total frosting addict. Those corner pieces end up on my plate every single time.” 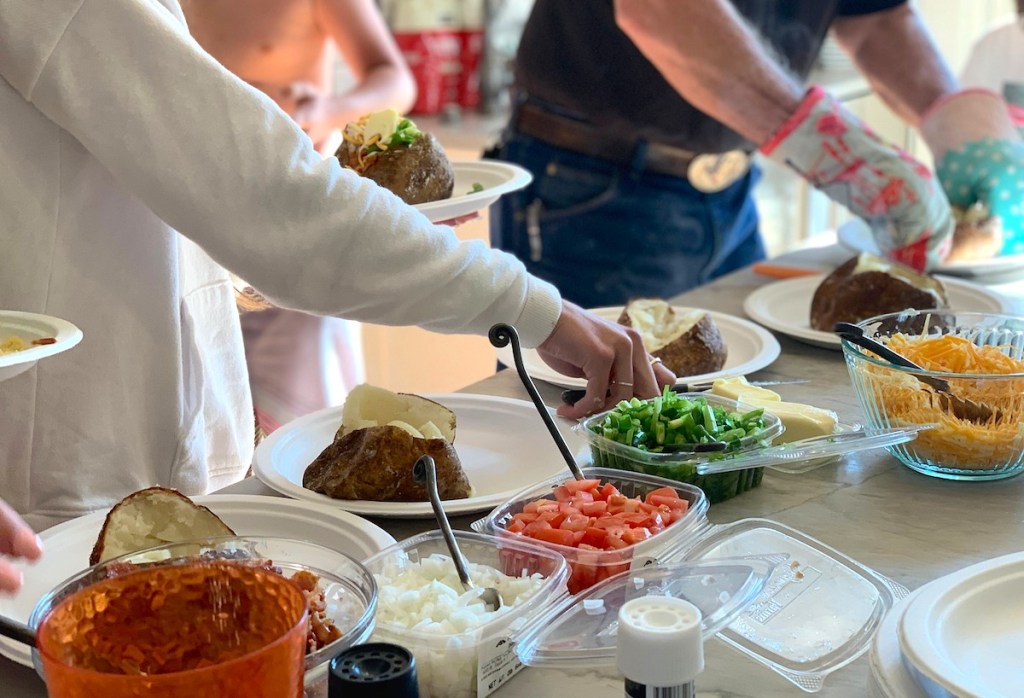 The big benefits of having a baked potato bar for a crowd:

Tips & tricks for hosting your own baked potato bar:

1. Find the best baked potato recipe to prep your potatoes. 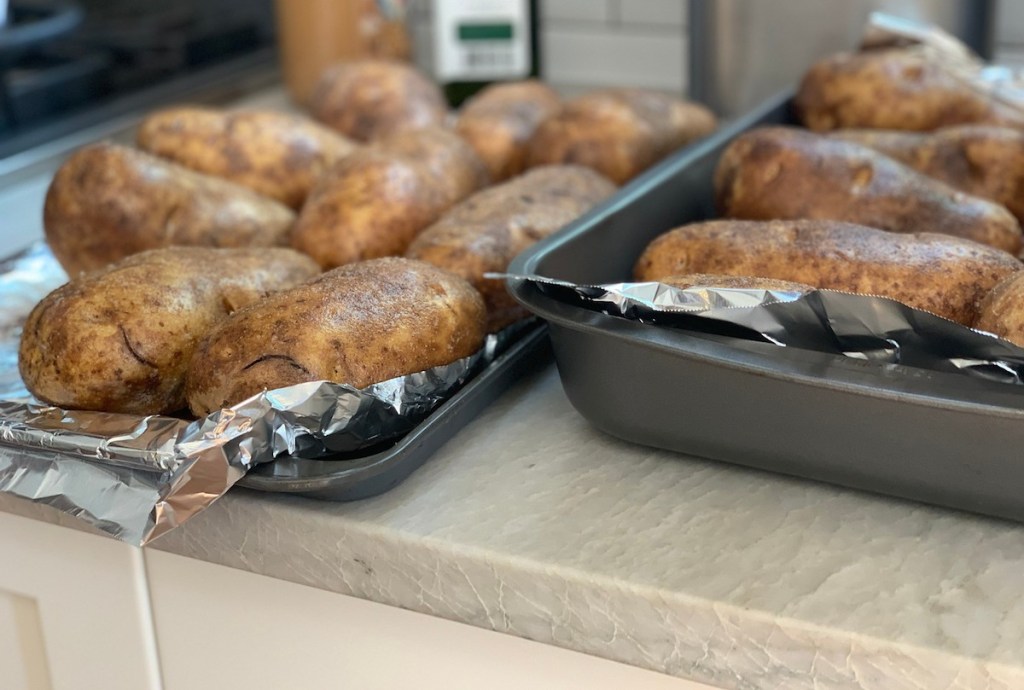 2. Make a pot of chili to really beef it up. 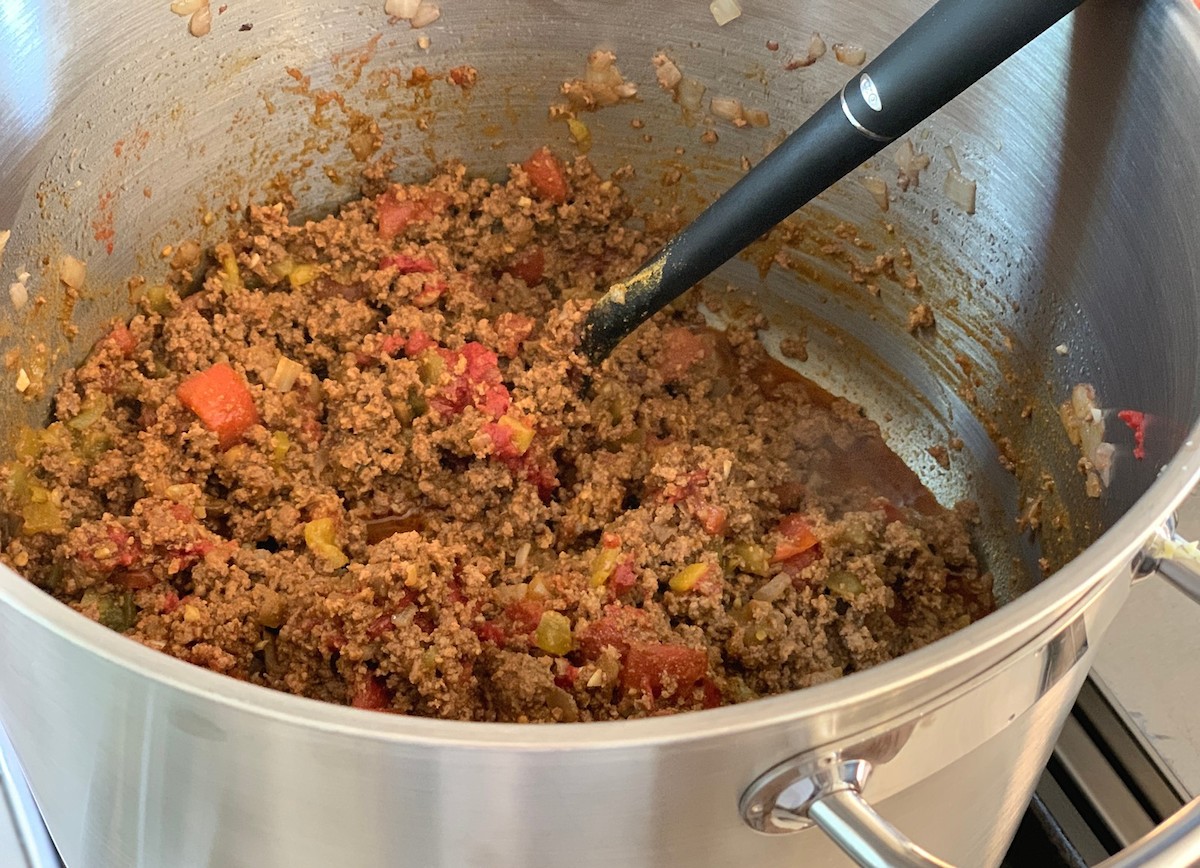 As many of you know, Collin doesn’t eat potatoes, so she also made a big bowl of chili for everyone. That way, she could enjoy the toppings bar on a bowl of chili instead! This is also a great way to beef up your loaded baked potato. (Pun intended) 😉

3. Buy premade toppings to save on time and cleanup. 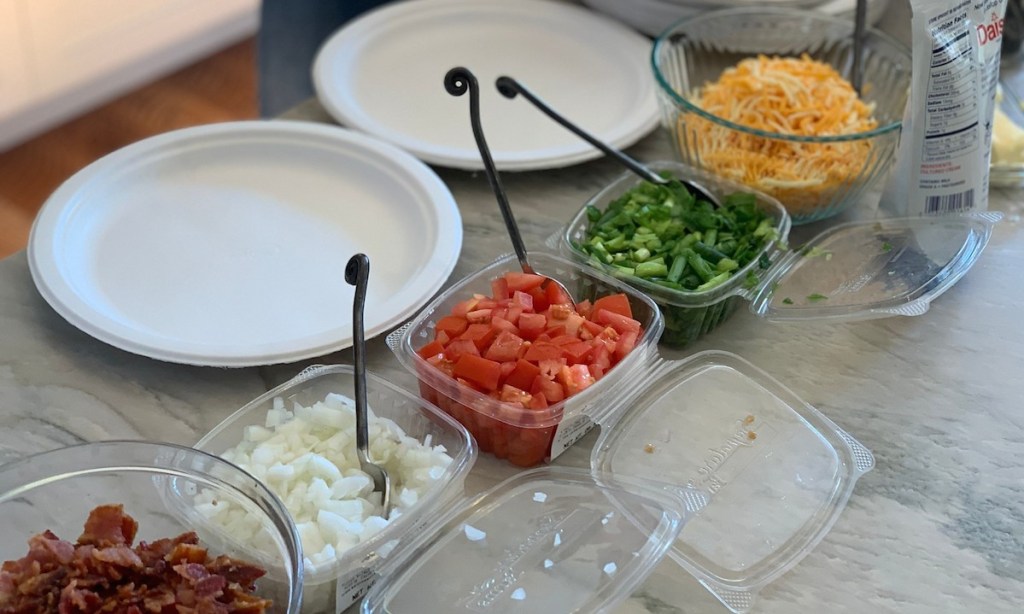 I know, I know… this isn’t the most cost-effective way to handle all your baked potato toppings, but for Nick’s 18th birthday, Collin said that this was the best way to plan her potato bar since she was in a time crunch. And during times like these, sometimes it’s okay to make exceptions.

Collin said that splurging on the squeezable sour cream was the way to go and that it worked seamlessly for the party! This also helped avoid everyone making a mess in the container or on the counter, which also helps make clean up easier, too.

Hip Tip: If you want to chop up all your own ingredients, I highly recommend a food chopper! You can perfectly and quickly dice up so many different veggies in just minutes!

Here’s a list of our suggested toppings for a baked potato bar: 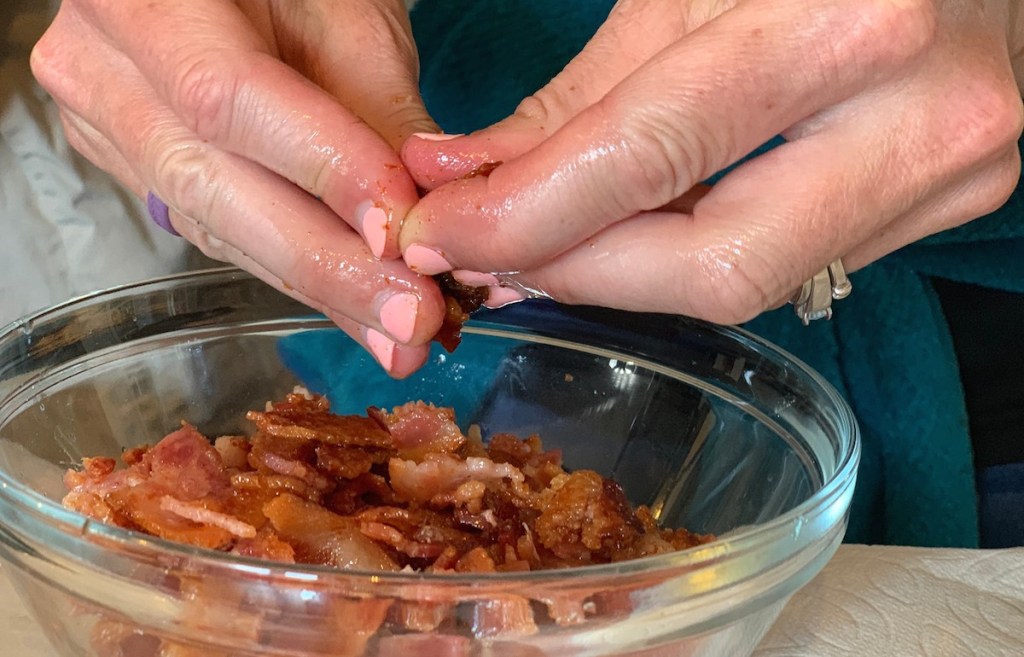 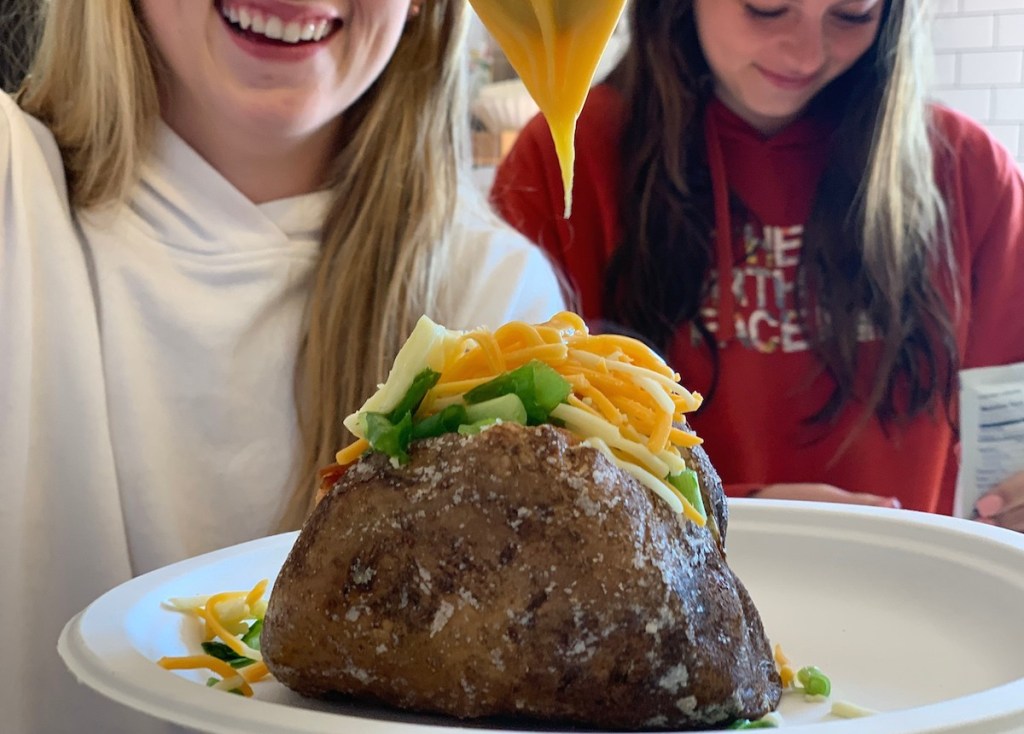 With so many toppings to choose from, friends can load their potatoes up as little or as much as they want. And one thing is for sure: they’ll have a great time, no matter what!

Collin’s son and all his friends really loved the baked potato bar! She said they were totally impressed and left with full bellies. What more could you want when feeding a crowd?!

Other food bar ideas to inspire your next party:

Make this vegan & gluten-free pumpkin pie or lemon blueberry cake for the perfect dessert! Or go get yourself a Costco cake like Collin did. 🙂 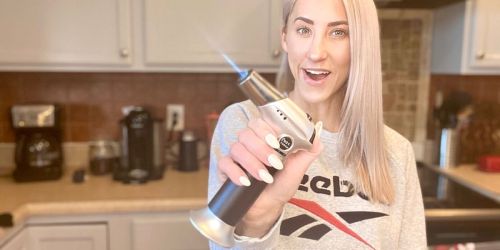 I’m Obsessed With This Culinary Torch From Amazon 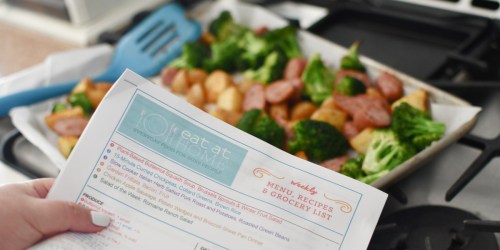 Avoid Dinnertime Stress with My Favorite Meal Plan Service (Get 30% Off This Week!) 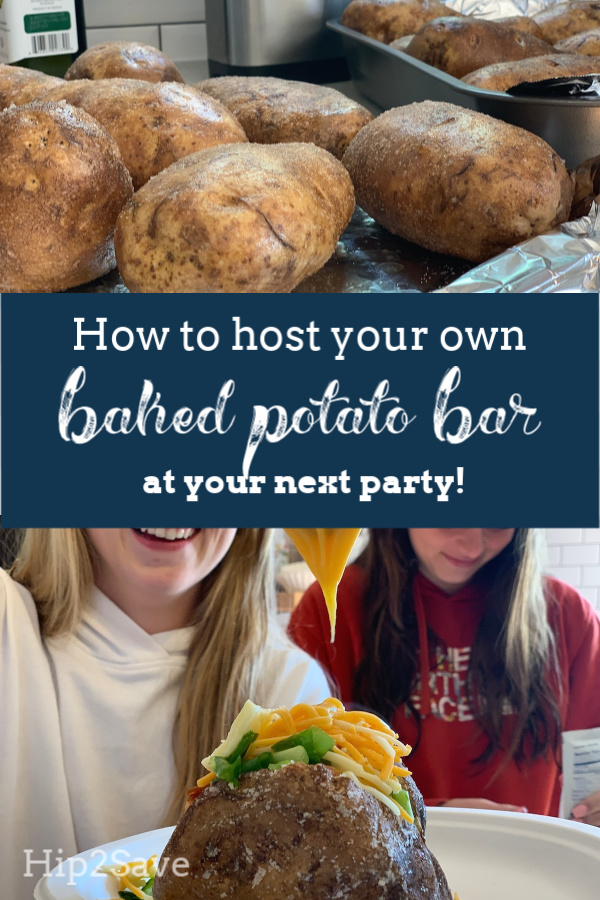