Costco Vs. Sam’s Club Taste Test – Who Has the Best Pumpkin Pie This Year?

Which warehouse club has the better-tasting pumpkin pie? We’re sharing the results of our official Costco vs. Sam’s Club pumpkin pie taste test! 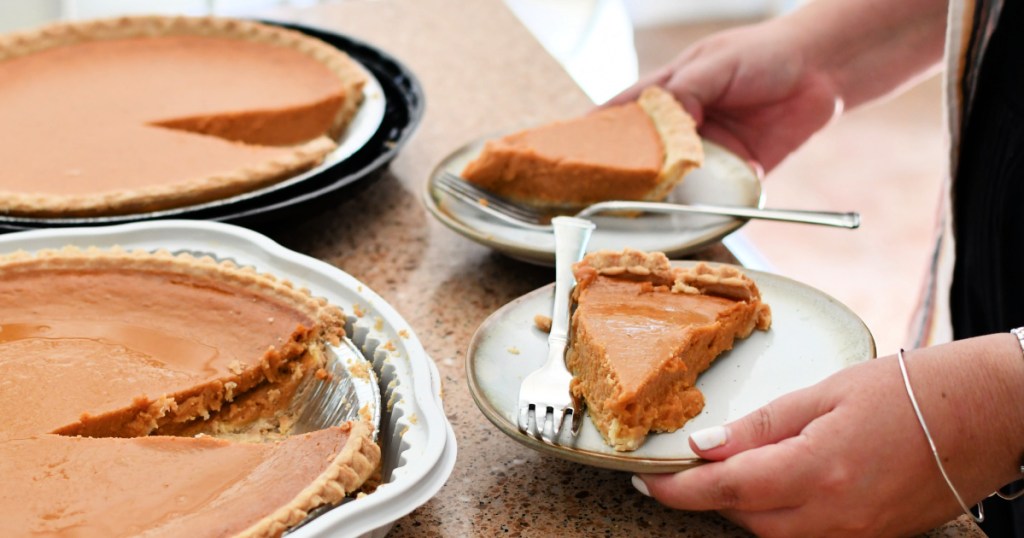 If you’ve ever wondered which warehouse club, between Costco or Sam’s Club, has the better-tasting pumpkin pie… wonder no more! I went again this year to get the scoop on these pumpkin pies and did another taste test for 2021 to see if one was better than the other.

Read below to find out which pie wins in our Costco vs. Sam’s Club Pumpkin Pie taste test. 🏆 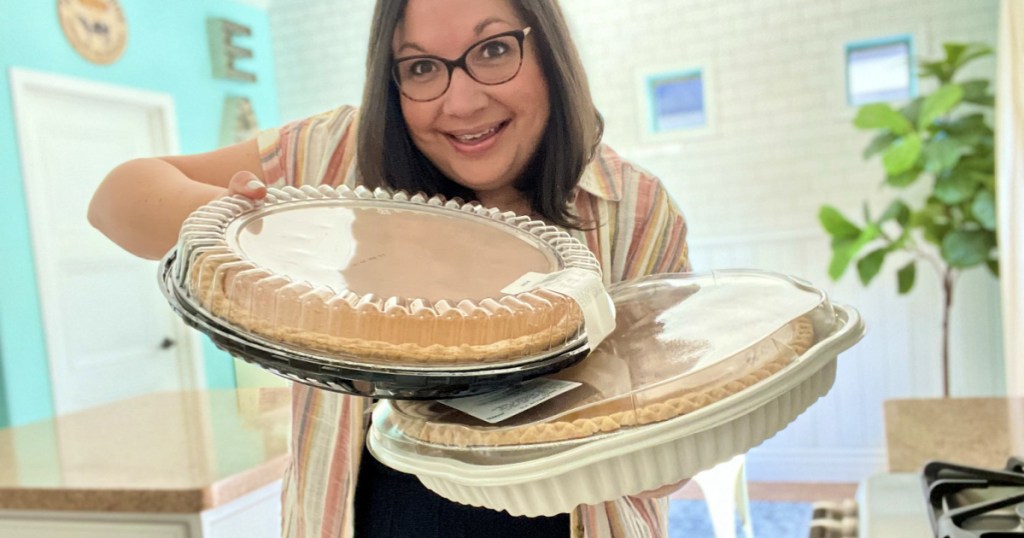 Look at how huge these almost 12-inch pumpkin pies are!

So just from the look of things, either one of these pies could easily feed my entire neighborhood or at least 12 people! To be honest, I’m not even sure you could make a homemade pumpkin pie that size for under $7, so both of these pies are priced at an amazing value!

If you are feeding a crowd on a budget, this is the way to go. 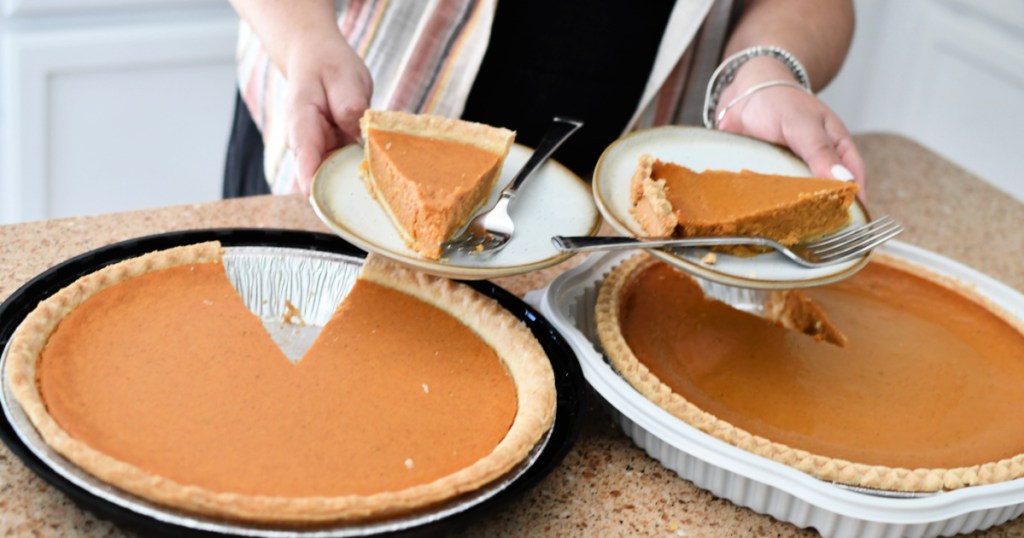 The 12″ Costco pumpkin pie weighs a whopping 58 ounces, which is nearly four pounds. We did notice that the price decreased at my location by $2 since last year, bringing the cost down from $7.99 to $5.99 which is exciting!

The Sam’s Club pumpkin pie is identical in weight and size (also weighing in at 58 ounces), however it did go up in price, I found it for $6.98. That’s still a phenomenal deal for such a LARGE pie! 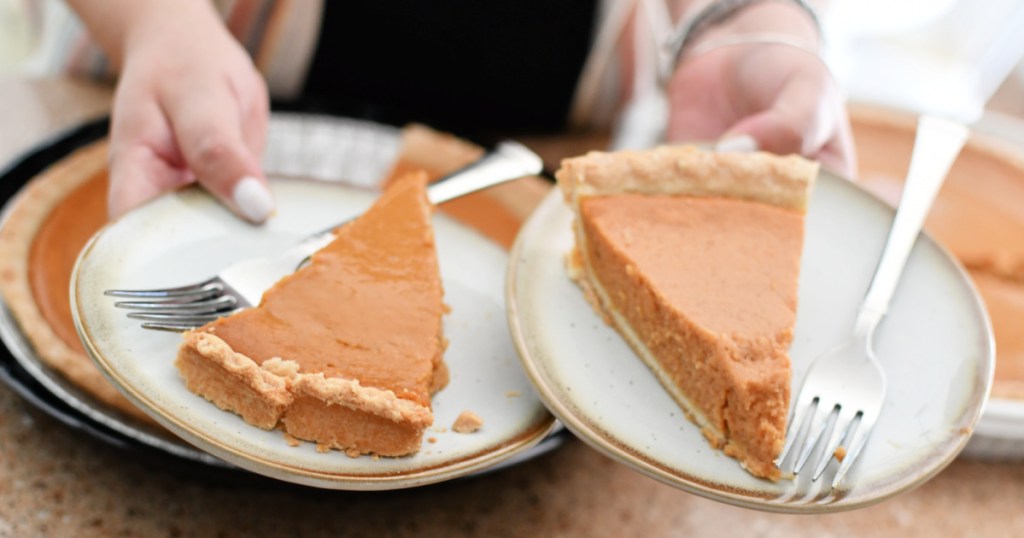 They do look similar but you can see texture differences right off the bat!

You can see that the Costco pumpkin pie slice as shown above (left) has more moisture and is a bit darker in color. The Sam’s Club version shown above (right) is lighter in color, thicker, and looks a little firmer. 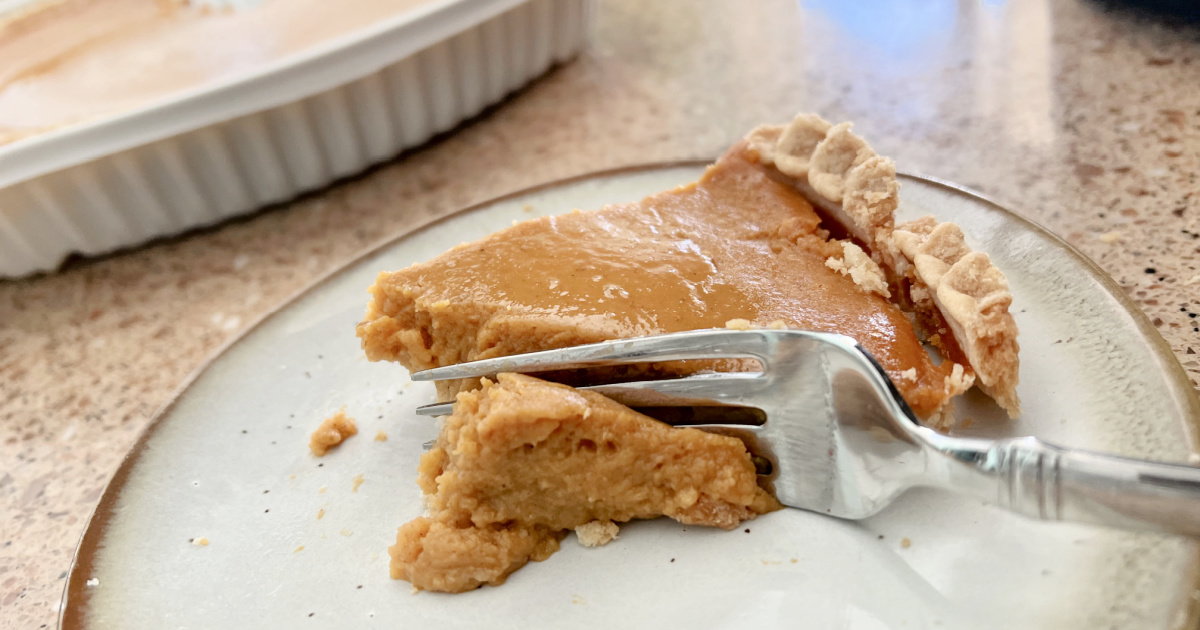 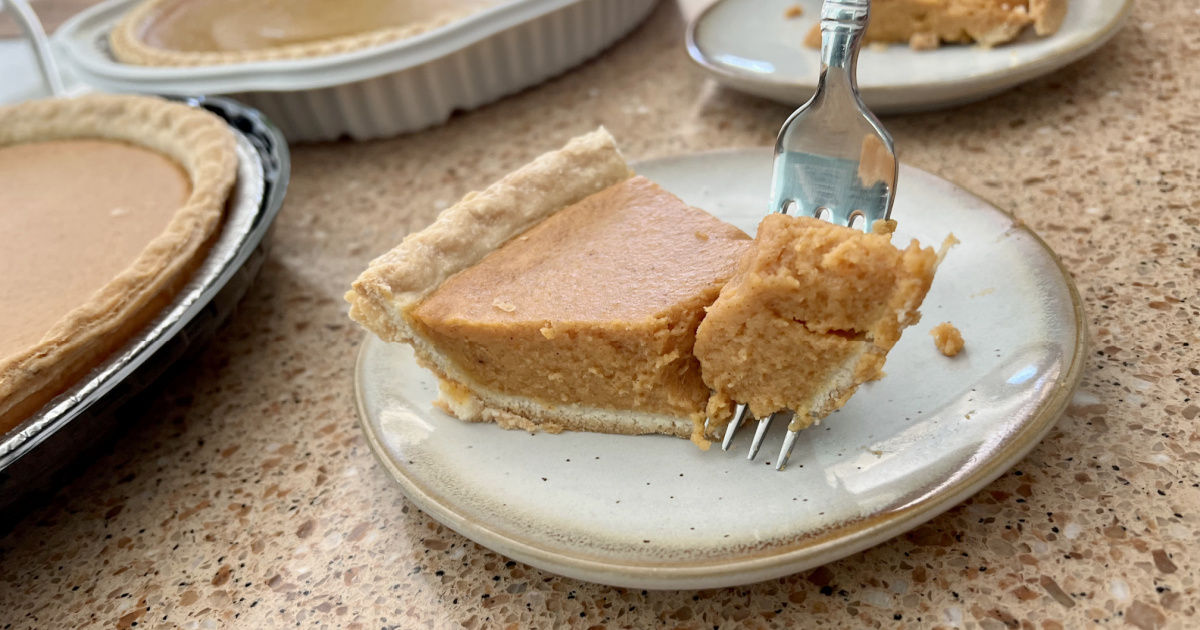 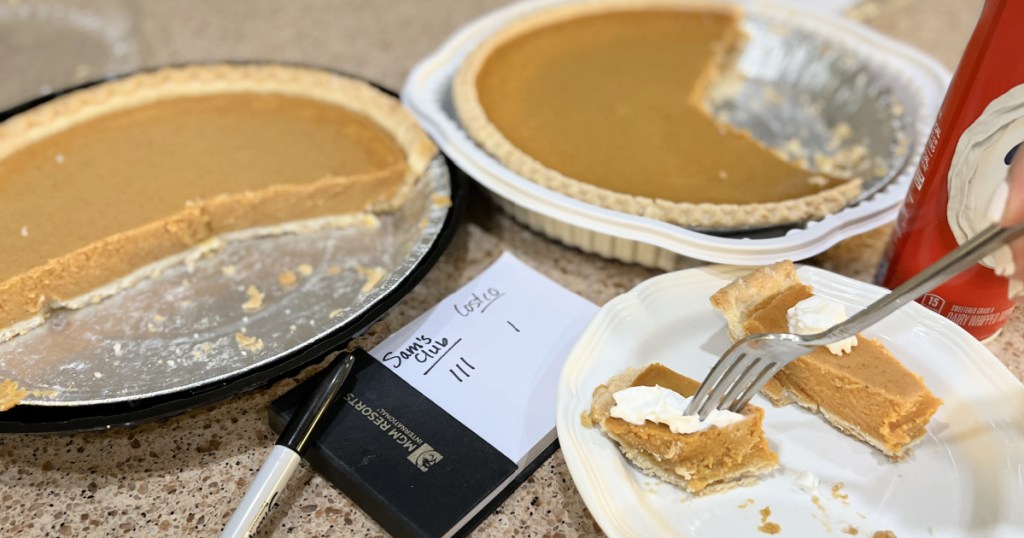 I did a blind taste-test at home using my pumpkin-loving family, and 3/4 of us picked the Sam’s Club pumpkin pie as the winner!

We honestly enjoyed them both, but the majority of us LOVED the overall texture and taste of Sam’s Club pumpkin pie just a bit more. If we had to choose one over the other, Sam’s Club won! Their pumpkin pie was a little sweeter, and it seemed like more of a classic pumpkin pie flavor (although your taste preference may vary).

This is exactly how we felt about the pie last year, meaning they’ve kept this classic favorite completely the same! 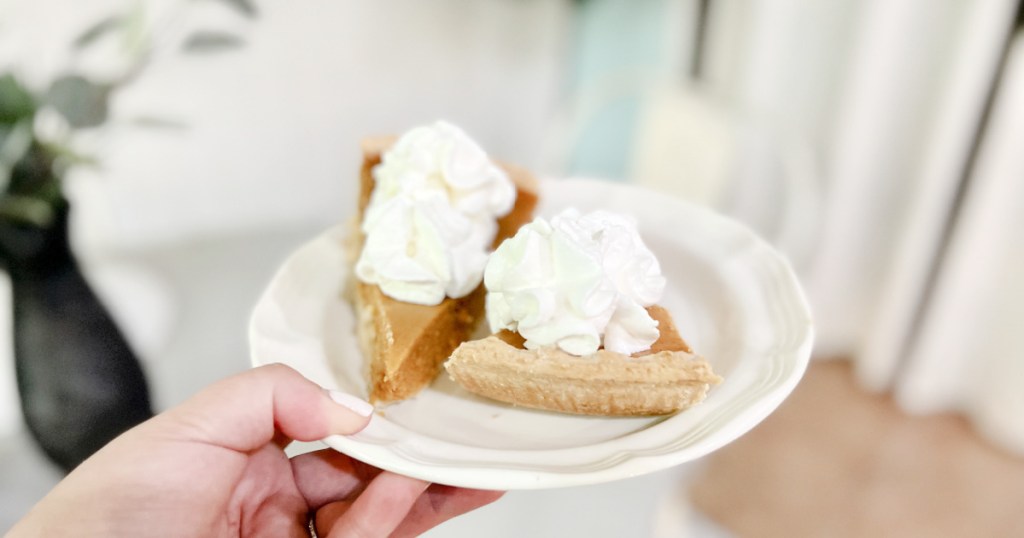 Although Sam’s Club was the winner again this year, the truth is that they were both delicious.

You really can’t go wrong with either one of these pies, especially when adding a bit of whipped cream! It’s safe to say that you could serve either one with confidence this Thanksgiving, or on any night when your family is hungry for the ultimate fall dessert. 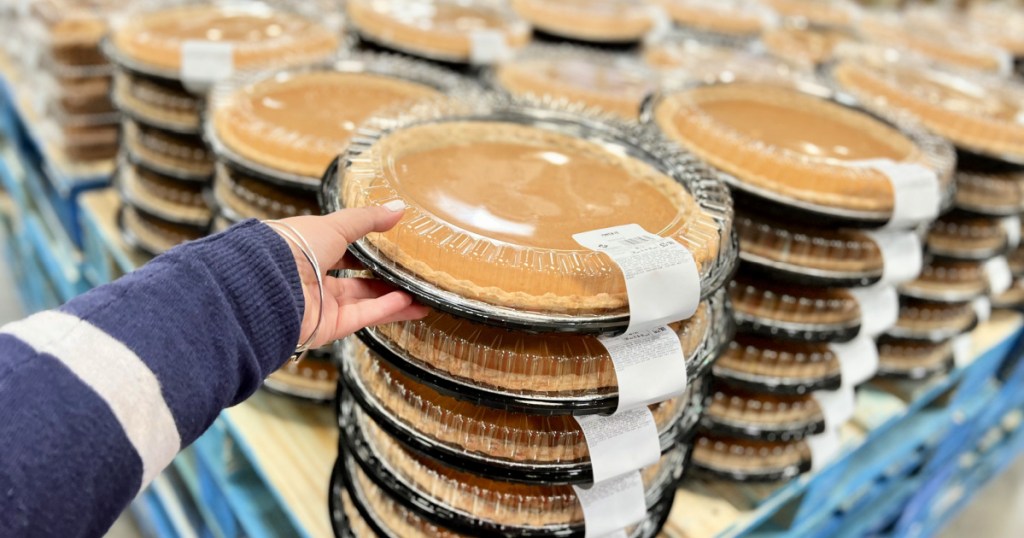 Many readers have agreed with our pie assessment over the years:

“I completely agree with every difference you mentioned between the pies. Sam’s is our fave as well. The texture of Costco’s is a real let down.” – Jen

“Great post. My family of 4 prefers Sam’s Club pumpkin pie over Costco too. I love the pumpkin pie bite serving idea for a large crowd.” – Julie

“Seeing this right now is too funny. I literally just dropped off a Pumpkin Pie at my son’s that I purchased at Costco this weekend. I have always bought my pumpkin pies at Sam’s Club. I too prefer the Sam’s Pumpkin Pie’s.” – Julia 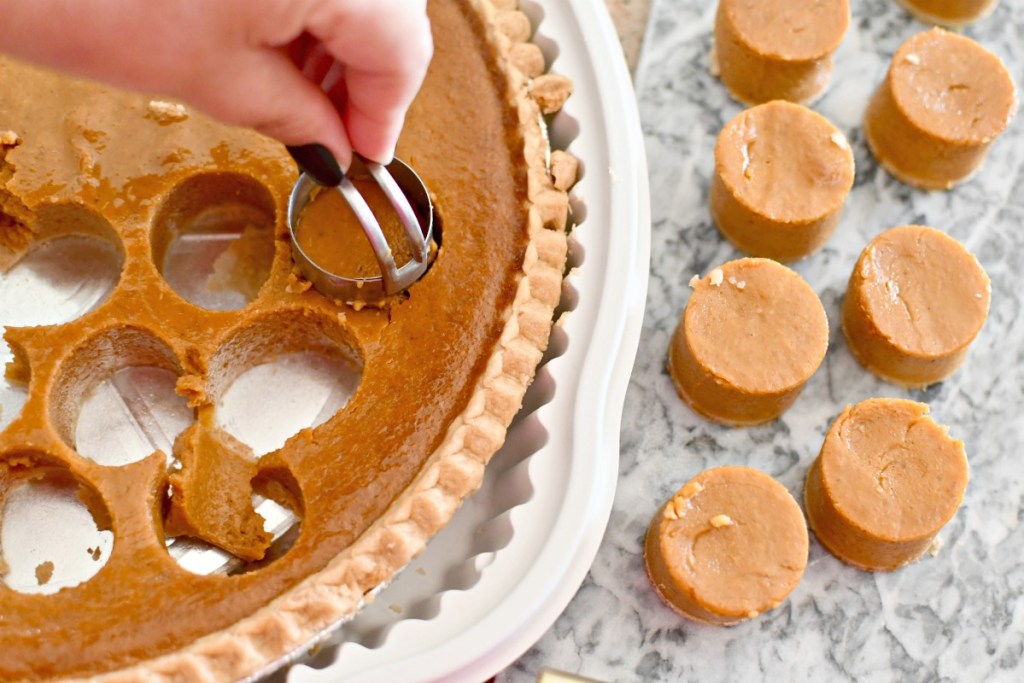 Here’s a fun and unique way to serve these large pumpkin pies!

Make miniature pumpkin pies from a larger pie using a small biscuit cutter or cookie cutter. Place your mini pies on a tray and top with whipped cream. Now you have the cutest mini pie bites to serve!

Perhaps you have some pumpkin pie leftover or want to bring something to a party that’s not just a huge pie. I have done this for a school potluck before, and it’s easier to serve these smaller pumpkin pie bites rather than having people try to cut a piece of pie at the end of a serving line. It also looks fancy and fun too, but still minimal effort! 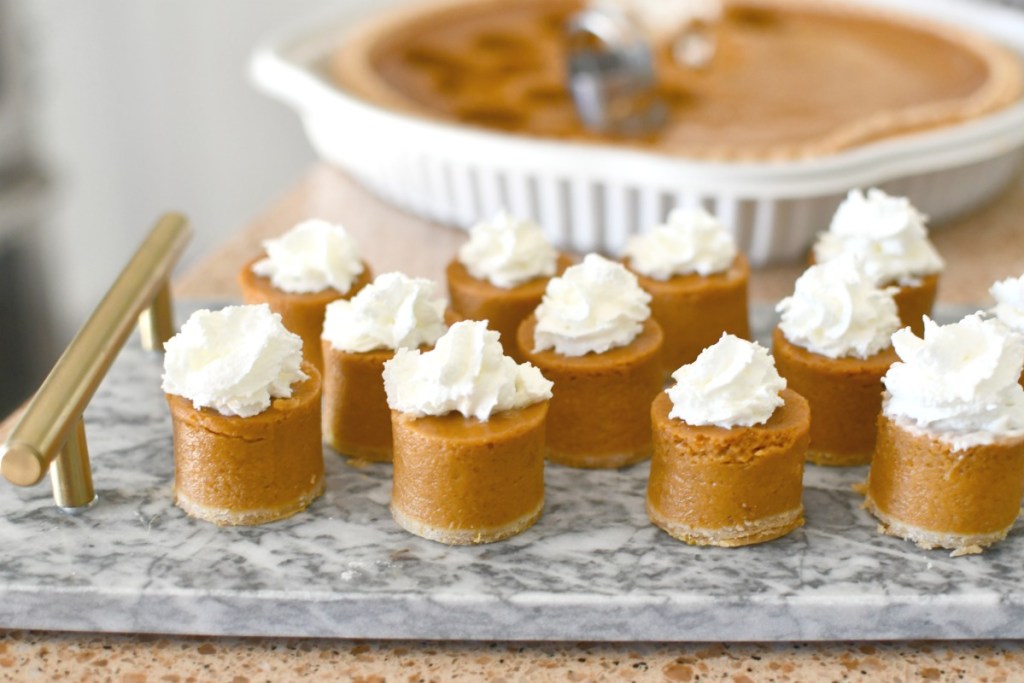 Have you tried either of these pumpkin pies? Let us know in the comments!

Here’s a stress-free pumpkin pie that I love baking, if you’re in the mood for homemade! 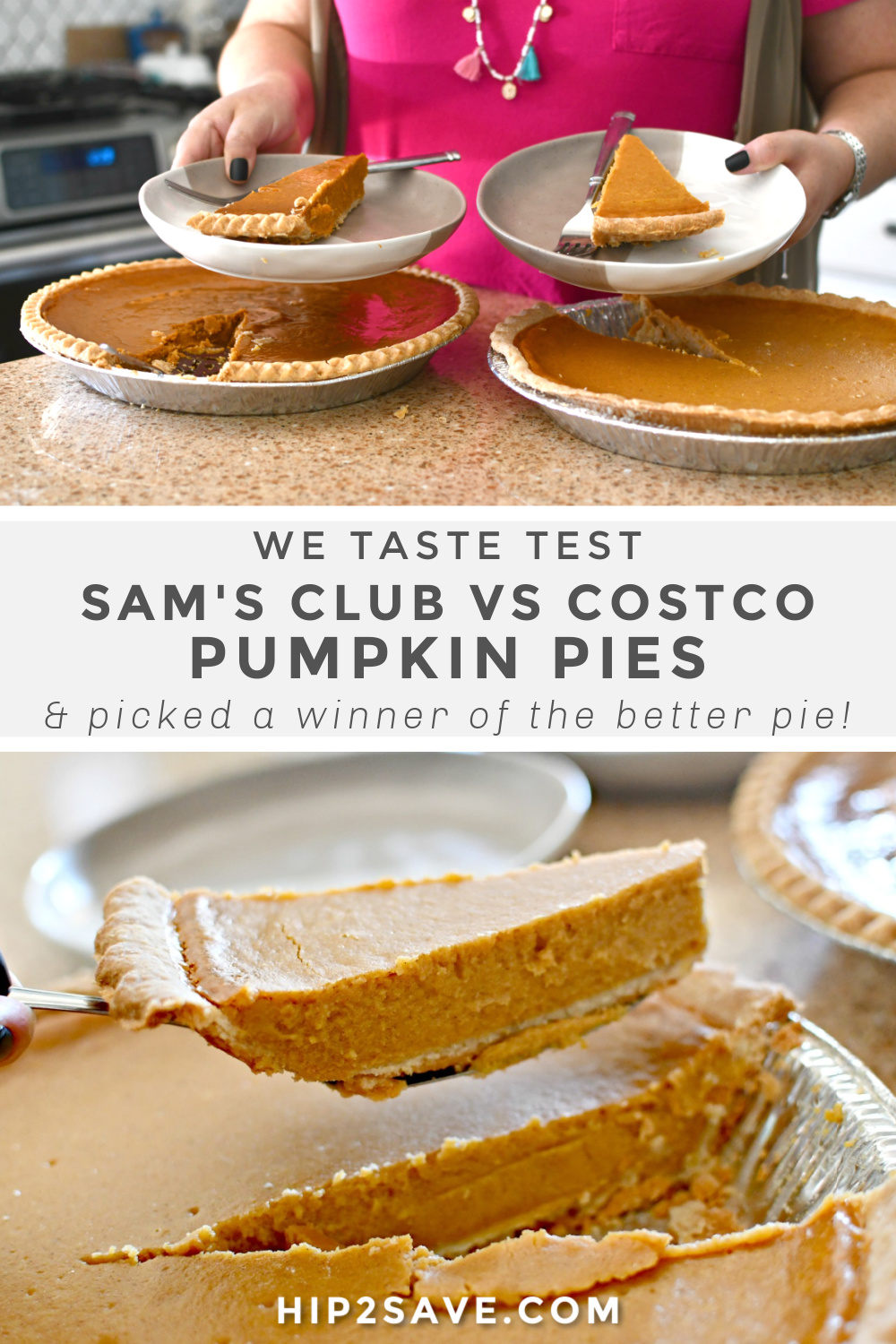