Our Team Had a No Deodorant Debate – Which Side are YOU on?

As an Amazon Associate, Hip2Save earns a small commission from qualifying purchases in this post. Prices and availability are accurate as of time posted. Read our full disclosure policy here.

No deodorant = no problem. Here’s how to keep armpits from smelling without deodorant! 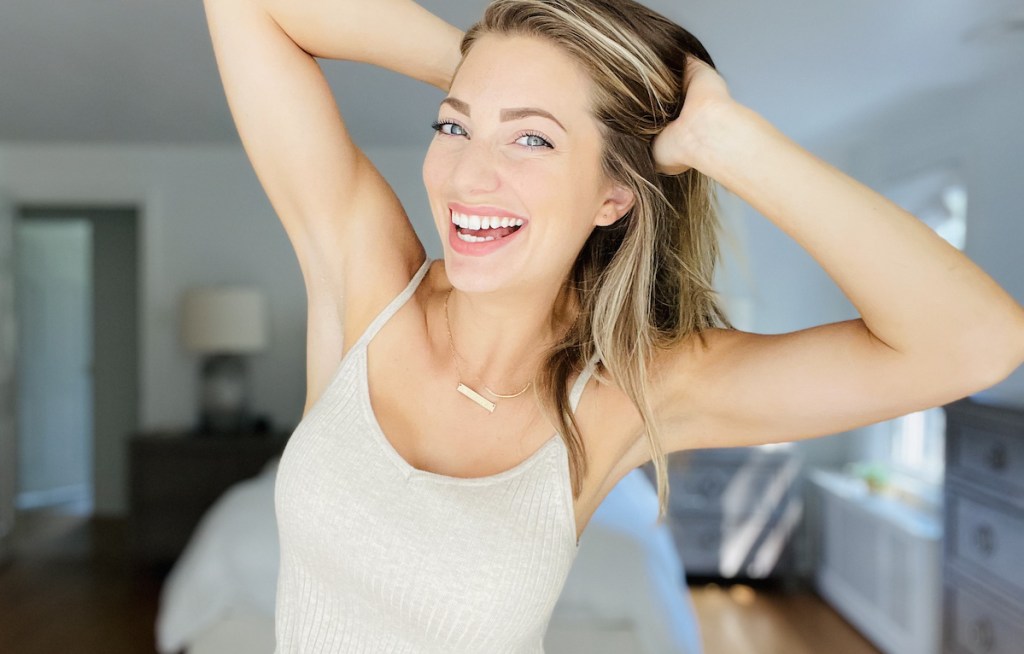 We found something you can skip buying next time you’re at the store, and over time it can save you big. Not to get too personal, but I don’t wear deodorant, and I’m here to tell you keeping your armpits from smelling without deodorant is totally possible! It could be the secret to an ideal daily routine you didn’t know you needed…though some of my Hip team members may not agree. 😂 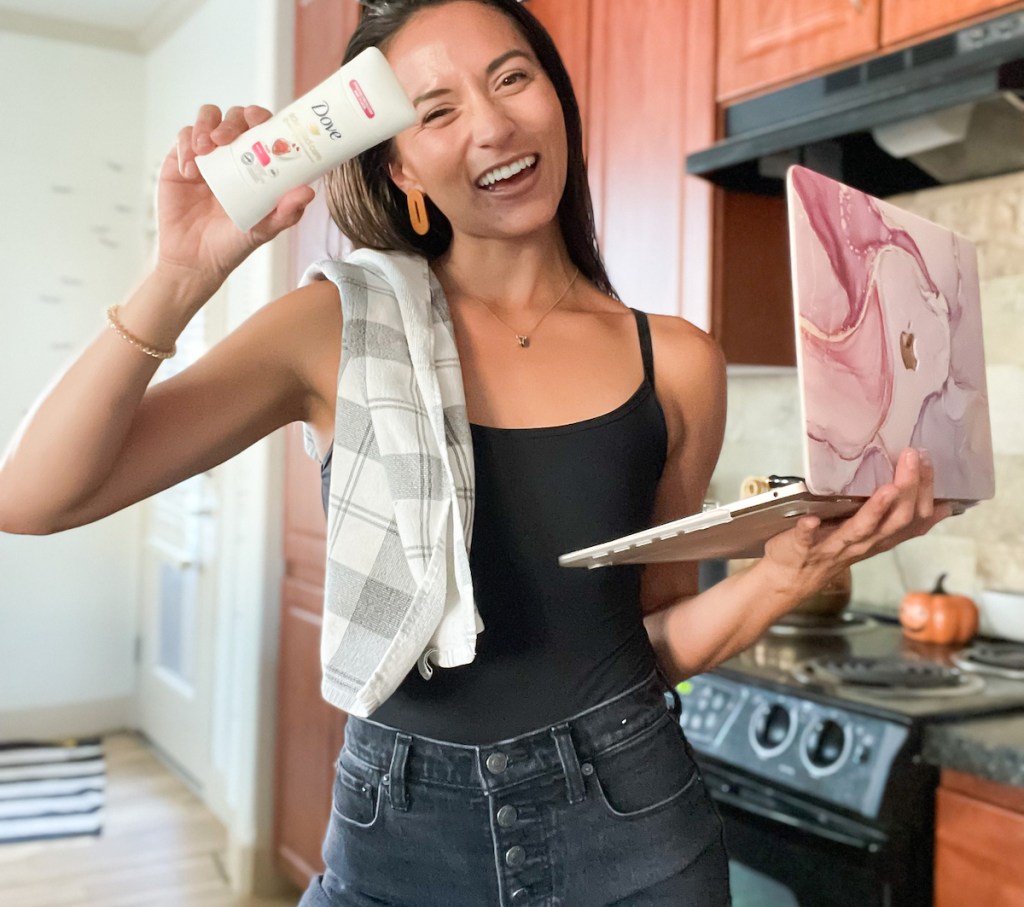 Deodorant is a frequently talked about topic within our Hip team but not wearing deodorant at all is a hot topic that shocked a lot of our Hip sidekicks. Yes, you heard that right! Turns out some of us on the Hip2Save team don’t even wear deodorant at all and it’s saving us money in the long haul. 😱

Here’s what one Hip reader shared about recently ditching deodorant:

“I found myself wearing deodorant less when the pandemic hit and I wasn’t going anywhere, but I would wear it when I had to leave the house. However, since I was getting used to not wearing it, at times, I would take a shower, get dressed, and leave the house realizing way after that I forgot to put on deodorant. Then in January 2021, I had shoulder surgery so I couldn’t lift my arm and I stopped wearing it altogether. Now, I don’t wear any deodorant at all, and even when I go for a brisk walk at work, and come back sweaty and I do not smell! So, no more deodorant for me!” 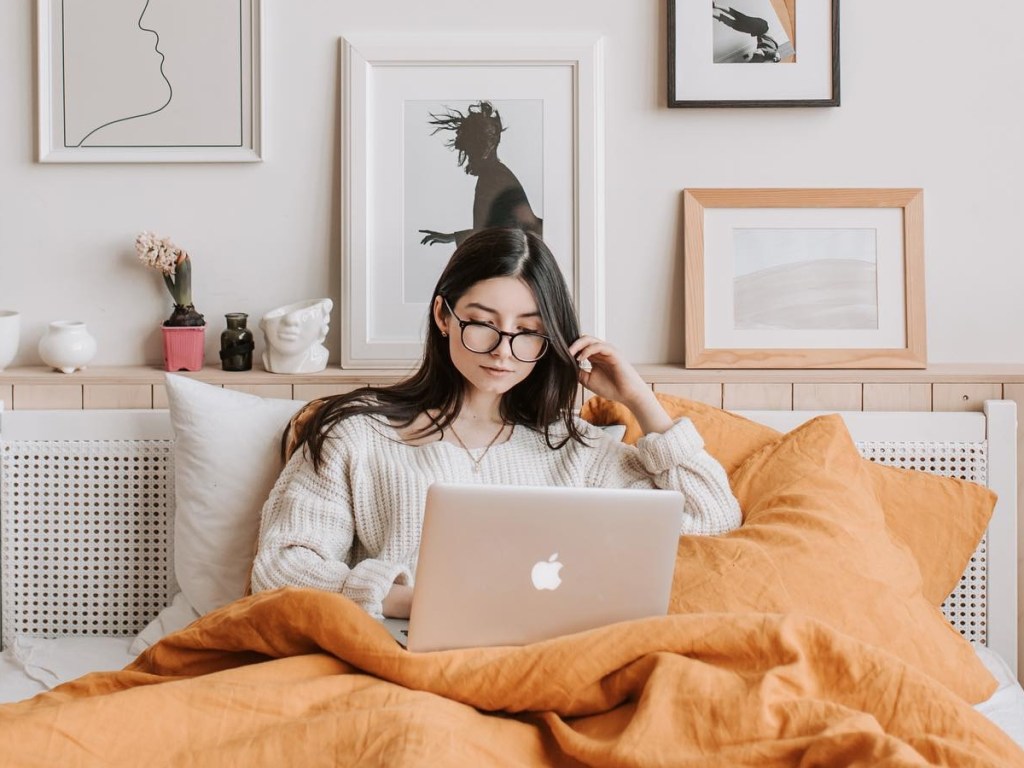 Turns out that a significant amount of people stopped wearing deodorant altogether when working from home became more common. According to CNN, deodorant sales slumped significantly in 2020.

More recently, they noted the fact deodorant isn’t actually a medical necessity, but rather a cultural and personal preference.

The deodorant industry was worth $5.59 billion last year and is expected to make a steady increase over the next few years despite some people’s lifestyle changes since COVID. And while some are satisfied spending just a few bucks on popular drug-store brands, many are splurging on more health-conscious, natural deodorants. Designers like Tom Ford are in on the game too. Astoundingly, some consumers are spending a whopping $129.99 for just one stick of luxury deodorant. Say what?! 😱

This leads me to believe many of us could be saving if we thought twice about how to keep armpits from smelling without deodorant. 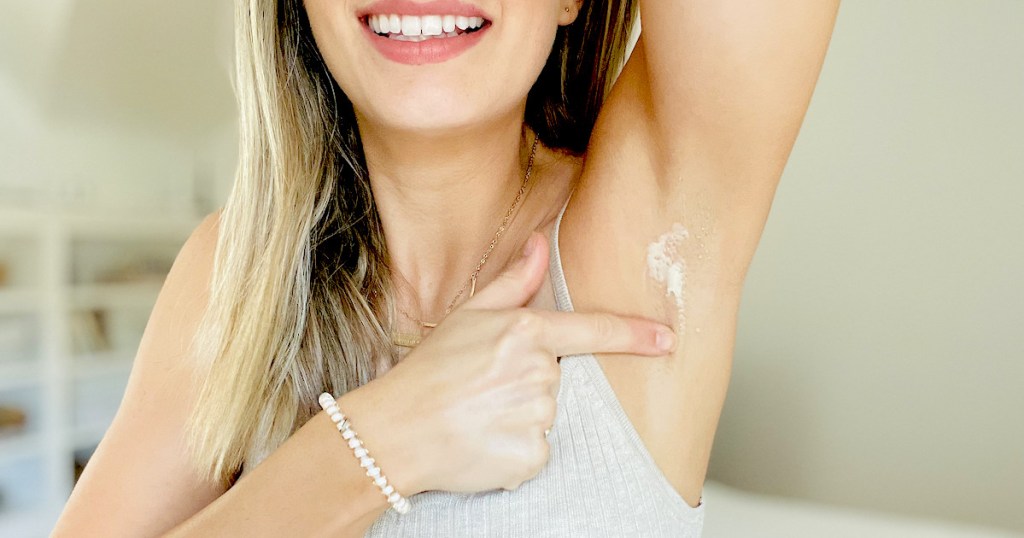 According to Statista, you could save on average about $26-$50 a year to ditch deodorant. However, it’s pretty clear deodorant is a must-have for the majority of our team. I did a very scientific poll 😉 and here were the results:

I was shocked to be one of the only ones who don’t wear deodorant on occasion. 😂 That said, just because some of us are ditching this traditional and socially acceptable product, doesn’t mean we aren’t taking care of our pits. And it certainly doesn’t mean we’re walking around with a musk.

Did you know that sweating is not only totally normal but it’s also healthy and necessary?

Here’s what one of my Hip sidekicks shared about going no deodorant: 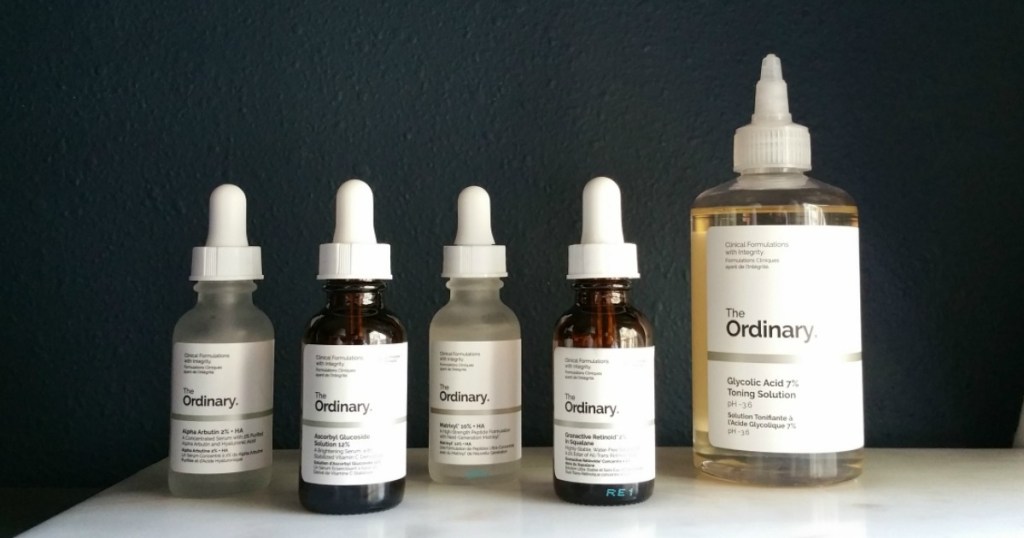 “For years I’ve been using The Ordinary Glycolic Acid instead of deodorant. It won’t keep you from sweating but it does keep you from getting stinky and may even help with hyperpigmentation. It works by changing the ph of your pits and gets rid of the bacteria that cause odor. You can add it to a spray bottle for easier application but I just drop a little onto some Shiseido cotton pads and wipe it on. I never do it right after I shave though and I always apply it at night, once my armpits have cooled down from my shower. I probably use it once or twice a week in the summer and I love it!” – Cass, Hip sidekick

Here’s what another Hip sidekick shared:

“Get ready for a super personal fact about me. I don’t wear deodorant and haven’t since I was a teenager. I promise I don’t stink! 😆” – Paige 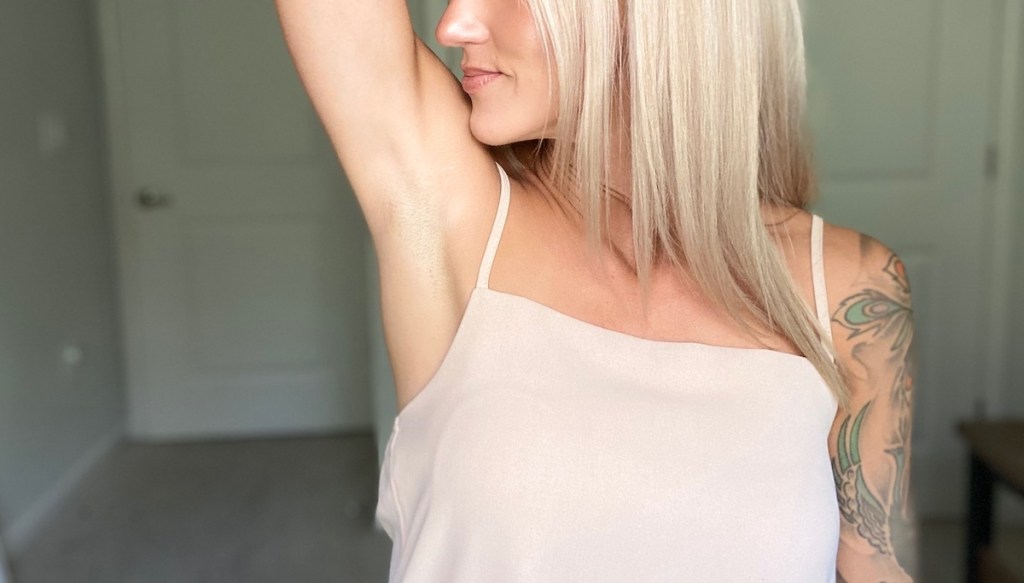 Here are some of the benefits of not wearing deodorant:

Still convinced you need to cover up? Did you know that there’s a difference between Deodorant and Antiperspirant? 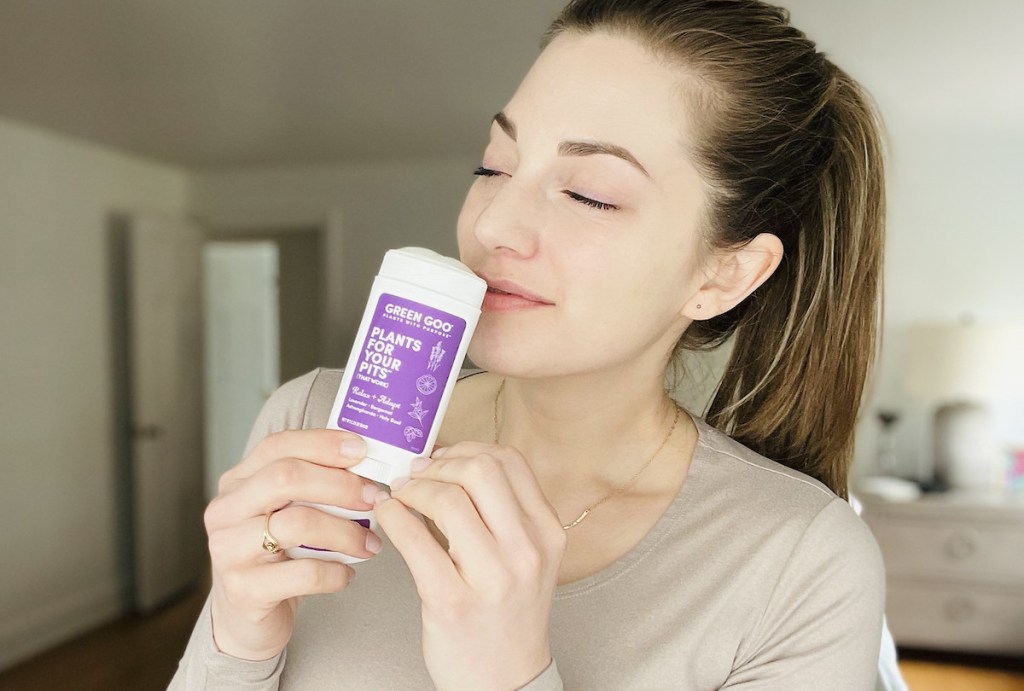 Deodorant is specifically made just to prevent body odor. This means you’re still going to sweat with it on. Deodorants can be applied not just to your armpits, but also to your feet and other parts of your body too.

Whereas, antiperspirant is just applied primarily to armpits. It also contains antimicrobial agents which prevent sweating by blocking sweat glands. This in turn reduces moisture on your skin, but in all actuality, this could be making you smell worse since it alters the composition of bacteria in your armpits. According to other studies, you’re also risking a paradoxical increase of sweat production in other areas of the body. 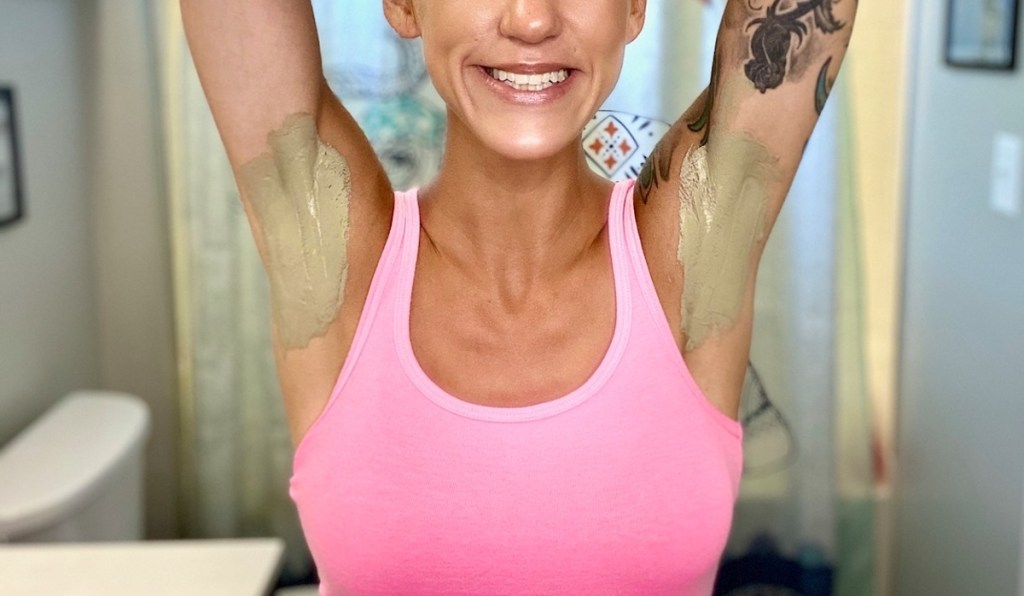 An armpit detox is a great idea for how to keep armpits from smelling without deodorant.

Body odor can also be a reflection of your gut’s health or other underlying health conditions (among other things). Thankfully, this quick and easy home remedy will help eliminate toxins and release odor-causing bacteria that could be building up in your body and contributing to foul body odor when you do sweat.

All in all, this simple tip could make it easier to start using a much more natural deodorant. Or ditch it all together like some of us. 😉 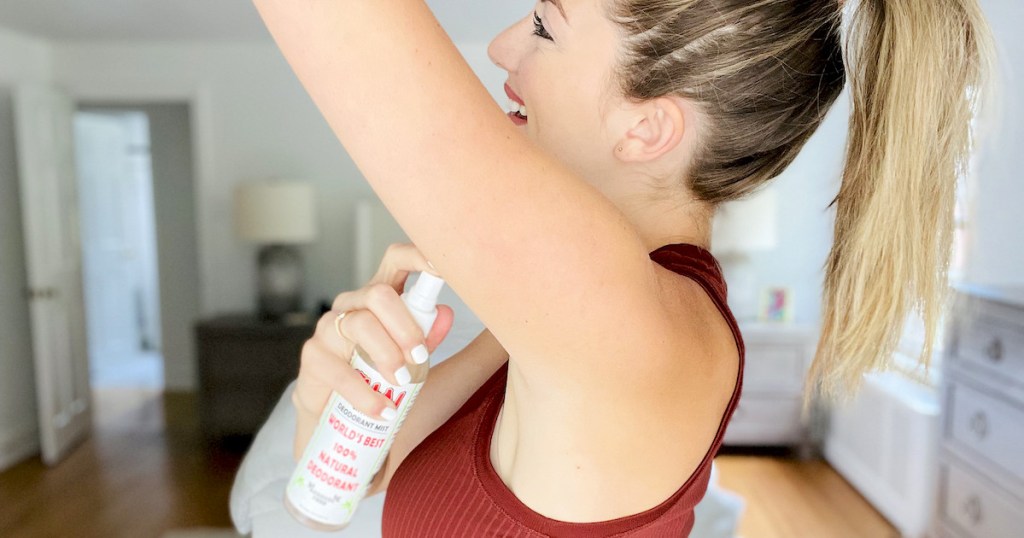 The truth is, I really don’t stink with no deodorant (promise!). I’m also super sensitive to smells so I truly do love the natural smell of my body. Luckily, my partner does too. 😆

So, if it’s just me and my laptop working from home, you can bet I’m normally not wearing deodorant on the day-to-day. 😏 Plus, the frugal side of me loves the added savings! However, for special occasions, I do still love a good natural deodorant or my go-to DIY deodorant. BUT I never wear it to mask a bad smell.

Choose a deodorant with clean ingredients that’s right for you. 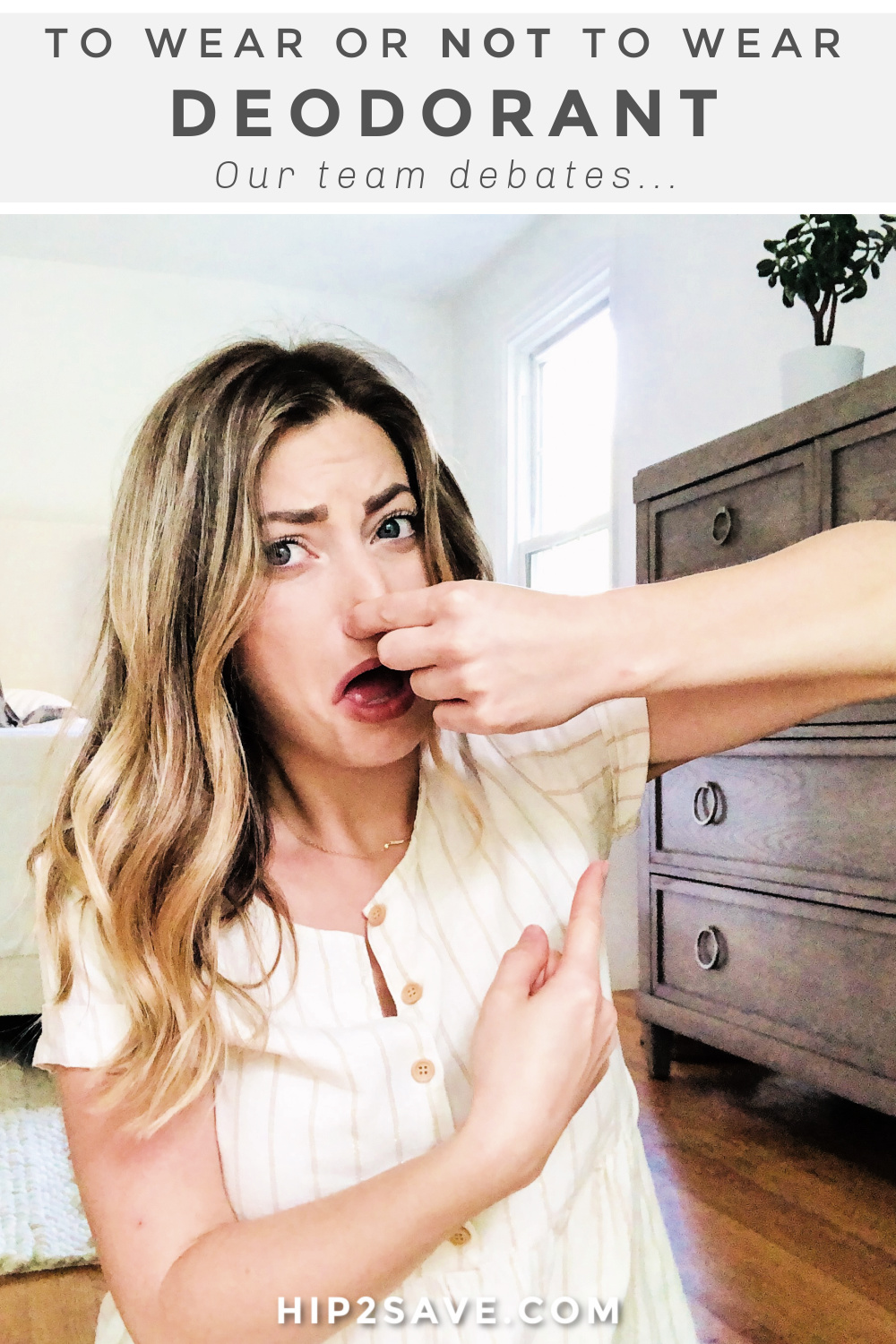